June 23 marked the 50th anniversary of Title IX, the federal legislation mandating equal opportunities for men’s and women’s participation in education, including sports. The very next day, the U.S. Supreme Court struck down another 50-year-old decision — Roe v. Wade — thus denying women and girls protected by Title IX their bodily autonomy to choose when or whether to bear children.

Title IX states: “No person in the United States shall, on the basis of sex, be excluded from participation in, be denied the benefits of or be subjected to discrimination under any education program or activity receiving Federal financial assistance.”

Title IX gave women the opportunities to get scholarships to play sports in college without being saddled with massive student loan debt.

Years after its passage it provided the foundation for professional women athletes to demand and win equal pay with men. On May 18 we witnessed the historic collective bargaining agreement by the United States Soccer Federation, the U.S. Women’s National Team Players Association and the United States National Soccer Team Players Association that created true pay equity in that sport. 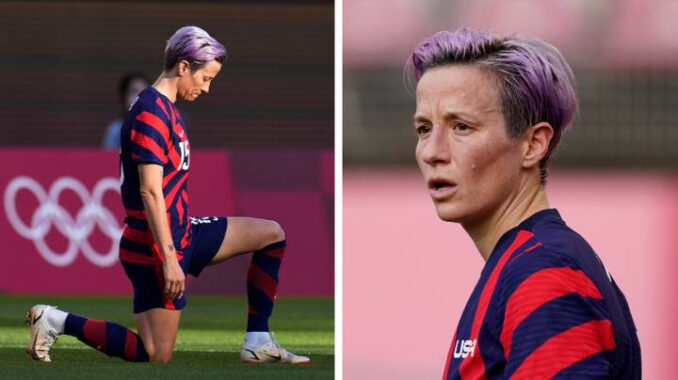 Megan Rapinoe spoke out against the reversal of Roe v. Wade, June 24.

Rapinoe was one of over 500 female athletes who signed an amicus brief in support of Roe v. Wade, arguing that Roe was essential for the effectiveness of Title IX, as choice offered many women the opportunity to pursue sports. She stated: “We absolutely need to be vigilant. It is really sad that 50 years on from Title IX, and that so far on from Roe v. Wade, we’re bringing up not just settled law but a settled desire and progression that the majority of the country really want. This is not the will of the majority of the people, by any means at all.”

Threat of jail for miscarriages

Most athletes covered under Title IX are of the age group most impacted by SCOTUS overturning Roe v. Wade. Without reproductive choice women are denied access to compete in sports. Being forced to carry an unintended pregnancy to term could seriously limit one’s ability to participate in many types of athletic activity.

Signed into law by President Richard M. Nixon in 1972, while vastly increasing athletic opportunities for women and girls, Title IX also provided recourse for victims of sexual assault or harassment on campus. It laid the basis for how schools that received federal funding should handle accusations and protect survivors.

But in 2020, Donald Trump’s education secretary, Betsy DeVos, weakened these protections by making the rules more accommodating to the accused. Colleges had to provide live hearings to adjudicate sexual assault complaints. In these hearings the accused could cross-examine witnesses and even interrogate the victim, which strongly discourages survivors from reporting sexual assaults or harassment.

It is no coincidence that restrictive abortion bans in several states give rapists and misogynists more control over unwanted pregnancies than they give to those they criminally impregnated.

To mark the 50th anniversary of Title IX, President Joe Biden proposed amending the rules governing how educational institutions investigate and resolve claims of sexual assault and harassment, including eliminating the live hearings.

Biden’s proposed Title IX changes would also bar schools, colleges, and universities from discriminating against transgender students. If passed, they would compel schools to accommodate transgender students by allowing them to use bathrooms matching their gender identity. They would ban bullying based on gender identity and ensure individuals are addressed by their correct pronouns. Schools that fail to comply could risk losing federal funding.

However, the current conservative anti-LGBTQ+ movement, emboldened by the SCOTUS Roe ruling, will push for passage of more state laws excluding transgender students from sports. As of March, state legislators have filed over 200 bills to deny transgender students their rights.

Any changes to Title IX can be made by the Department of Education. No congressional approval is necessary. However, the SCOTUS ruling overturning Roe v. Wade is proof that to protect rights we have won through struggle, we need to be in the streets — not just challenging SCOTUS but the whole rotten capitalist system.