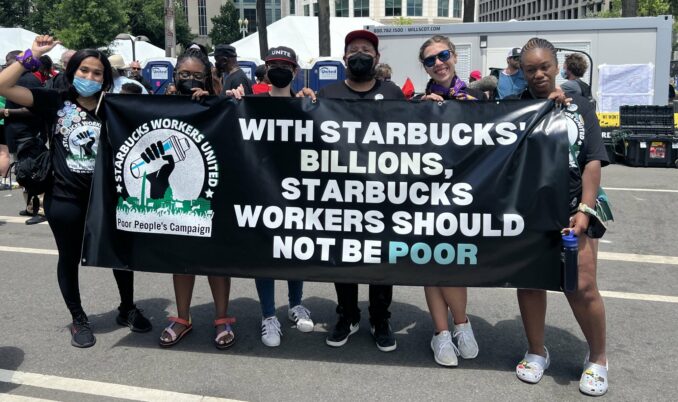 Starbucks workers — including some of the Memphis 7 fired for organizing — came from Tennessee to join the Washington, D.C., Poor People’s Campaign protest, June 18.

From the stage, three blocks from the U.S. Capitol, speakers from nearly every state challenged Congress to address the immediate needs of over 140 million poor people inside this country. The action sought to unite “the undocumented, women, men, seniors, children, gay, transgender, Black, Brown, Native, white and Asian” people into a mass movement targeting elected officials in Washington, but also statehouses across the country.

Many acknowledged the historic significance of such a multinational gathering on Juneteenth, the date that enslaved enslaved Africans gained their freedom.

“54 years ago, my father launched the Poor People’s Campaign to revolutionize the economic landscape of our nation,” stated Bernice King, daughter of the late Dr. Martin Luther King Jr. Then, quoting Coretta Scott King, her mother, she stated: “Poverty is not only a long-standing evil but an actual act of violence against the actual dignity, livelihood and humanity of its citizens.”

After introducing King, the movement’s most visible leader, the Rev. Dr. William Barber II took the stage. He riled up the crowd, stating “We won’t be silent anymore, especially after they denied 39 million people last year a $15-per-hour minimum wage. When they block health care coverage and then call us essential, we won’t be silent anymore!”

Barbour was referencing the dozen hold-out states, mostly in the U.S. South, that continue to refuse to expand Medicaid coverage after the passage of the Affordable Care Act over a decade ago.

Millions of workers across the South are still denied access to basic health coverage, mostly because they make around $12 per hour and do not qualify for standard Medicaid, nor do they make enough to afford to buy health insurance. After years of pressure, the North Carolina State Senate in recent weeks voted to support expansion of Medicaid, a sign that the movement has won a strategic victory that may spread across the South.

Unions such as the Service Employees International Union have played a major part in the mobilization of low-wage workers in recent years. SEIU has funded several campaigns to organize workers to lift wages and establish new unions, such as the Fight for $15, the Starbucks Workers United and many campaigns at hospitals and airports across the U.S.

Raise Up the South, the southern arm of the Fight for $15, has mobilized hundreds of low-wage workers from North Carolina, South Carolina, Georgia and Alabama as part of their continual push at all levels of government and corporate power to build a mass movement to lift wages to $15 per hour.

“We shouldn’t have to worry about how we’re going to support our family from week to week. We need to open up the labor laws and get a union on every job, so we can live comfortably and be respected at work,” said Taiwanna Milligan, a Dollar General worker and Raise Up member from Santee, South Carolina.

Many Starbucks workers — including some of the fired Memphis 7 organizers from Tennessee — joined the gathering under a banner with the slogan, “With Starbucks billions, Starbucks workers should not be poor.” SEIU President Mary Kay Henry in her short speech made mention of the the recent victory of the Memphis 7 with their store winning its National Labor Relations Board union certification election. To date, over 160 Starbucks stores across the country have voted to unionize since Dec. 9, 2021, when the Buffalo, New York, Elmwood store was the first.

Municipal workers from across the South have been part of a major organizing wave, from New Orleans to Virginia. City workers in Charlotte, North Carolina, recently won a minimum wage for city employees of $20 per hour and a 10% raise, after six months of consistent actions in front of City Council meetings led by the Charlotte City Workers Union chapter of UE Local 150.

“We know that the biggest tool to fight against systemic poverty and racism can be UNIONS!” stated Bryce Carter, Vice President of North Carolina Public Service Workers Union, UE Local 150, Steering Committee of the Southern Workers Assembly and street maintenance workers in the City of Greensboro. From the stage, Carter continued: “Down South, a region where nearly 60% of all Black people live and work, we are in a fight for our lives to organize workers and to overturn Jim Crow-era laws that ban workers from collective bargaining.”

Last year, Virginia partially overturned their historic ban on public workers collective bargaining. Since then, many unions, including UE, SEIU, AFSCME and NEA, have been organizing to establish collective bargaining ordinances in local city, county and school boards.

In the day’s rally, many spoke against the criminal justice system, including Dontae Sharpe, who had been falsely incarcerated in North Carolina prisons for 26 years until his release last year after movement pressure. Others spoke about the racist roots of the immigration system and the rampant wage theft faced by migrant workers. Still others spoke out against climate change.

At the end of the action, Dr. Barber encouraged the crowd not to go home and continue business as usual.

Rather, he put forth three action steps to declare an ongoing, committed “Moral Movement”: Shift the moral narrative; build power; make real policies to fully address poverty and low wealth from the bottom up.