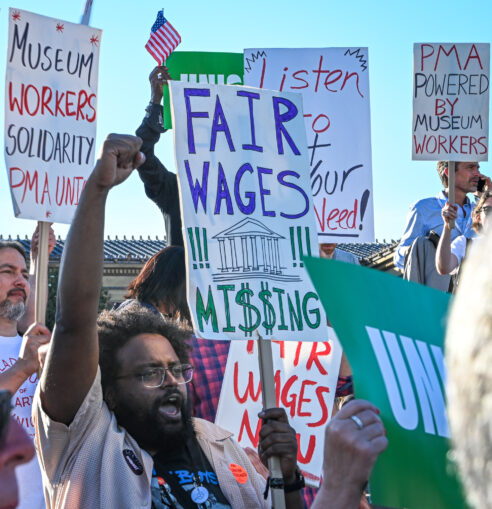 Hundreds of workers, labor activists and union officials from around the U.S. and other countries converged on the “Rocky” steps of the Philadelphia Museum of Art June 14, to demand its Board of Trustees agree on a fair contract with its workers.

Many of the participants took time off from the American Federation of Labor and Congress of Industrial Organizations (AFL-CIO) national convention taking place a mile away to show their solidarity alongside museum workers fighting for their first contract.

National AFSCME President Lee Saunders said: “The PMA Union is part of a rising grassroots movement of cultural workers, who are organizing with pride and passion, who are seeking the power and protections of a union. This young, dynamic workforce is bringing new energy to the fight. . . . They represent the labor movement of tomorrow, but more importantly they represent the labor movement of today . . . like Rocky, they kick some ass.”

The PMA Union has been in contract negotiations with PMA management since October 2020. They’ve been negotiating for fair pay and affordable health insurance, for worker protections like job security and safety from harassment and for opportunities to build careers at one of the most prestigious museums in the U.S.

Museum worker Amanda Bock had to switch to a high-deductible plan when PMA doubled the cost of health care, leaving her with thousands of dollars in medical bills. “For far too long the PMA has capitalized on the prestige of working in a museum, but you can’t eat prestige,” she said.

While management delays responses to workers’ proposals, distracts from the big issues and dismisses the union’s proposed improvements, PMA workers keep showing up and doing the essential work that brings the PMA to life and makes the museum a world-class institution. PMA Union members say they’ve waited long enough for necessary change.

“Management, you may not see us, but we see you. Your refusal to agree to a contract that compensates us like the professionals we are is a refusal to see us and recognize us for the significant work we do to sustain this museum,” said PMA worker Jean Korey.

The high-energy event featured signs and frequent chants, speakers and other special guests, including President Liz Shuler, representing the national leadership of the AFL-CIO; Randi Weingarten, President of the American Federation of Teachers; John A. Costa, International President of the Amalgamated Transit Union; PMA Union President Adam Rizzo; and others.

The PMA Union is part of AFSCME Local 397, a union of museum and cultural workers in the City of Philadelphia. At a meeting of the PMA Local in May, 98% voted to establish a strike fund. To donate to the PMA Union Strike Fund, go to: tinyurl.com/msd8knuc. It’s time for a fair contract now!