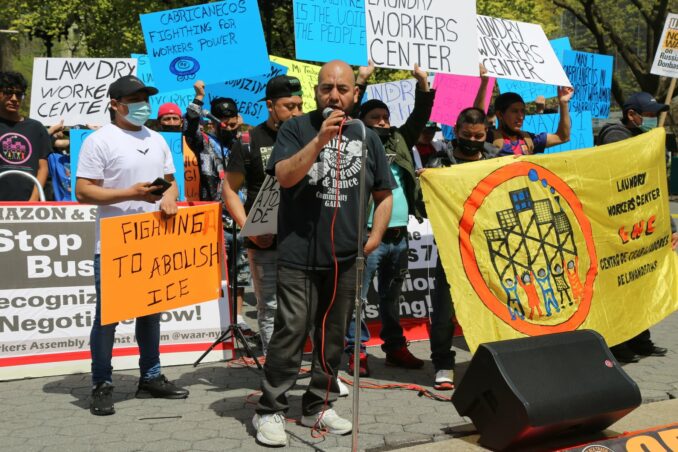 The day after May 1 — International Workers Day — a group of immigrant construction workers, mainly from Guatemala, launched the Cabricanecos campaign at an early morning action in Brooklyn, protesting dangerous working conditions they face daily throughout all New York City boroughs. This campaign represents 40 workers.

These courageous workers prepared a letter listing their demands. While their supporters looked on, the workers surrounded one boss’s car in an attempt to give him their demands. The boss refused to take the letter, but the point made by workers rang loud and clear: they want to be treated with dignity and respect like all workers. This May 2 action was only the beginning of a protracted struggle.

The workers are represented by the Laundry Workers Center, a majority-migrant organization, which, according to their Facebook page, “addresses the need for community-based leadership development geared toward improving the living and working conditions of workers in the laundry and food service industries, as well as their families. Our work aims to combat abuses such as landlord negligence, wage theft and hazardous and exploitative working conditions, all of which are endemic in low-income communities in New York City and New Jersey.”

While the LWC is not an official union, its main goal is to show low-wage workers that they have the right to organize and fight for better conditions, even if they don’t have a union.

On April 30, Mahoma López, Co-Executive Director of the LWC, spoke to Workers World about the plight of these workers. Better salaries is a main demand, but just as important is the serious concern for the lack of protection on the job. Many of these construction sites don’t provide masks or respirators to protect the workers from asbestos and other debilitating and life-threatening chemicals that they face carrying out demolition cleaning at these sites.

These workers are also left without harnesses to protect them while working from heights. Any accidents can and have led to serious injuries and even death.

López explained, “The workers suffer a lot of injuries, because the company doesn’t provide minimum help, safety protections and protocols. The company forces the workers to carry heavy materials. And the result is that the workers have a lot of pain in the shoulders, backs and knees.

“There is a lot of emotional stress, too, because they have to finish filling trucks in a very fast way. Sometimes they are carrying these materials from the sixth floor, seventh floor, with no elevator down to the main floor. They don’t even have brooms or other minimal things like garbage bags.

“This is an industry-wide problem, because a lot of contractors basically don’t even care about laws to protect the workers.” Providing these kinds of protections for these workers means cutting into their profits.

Another result of the inhumane treatment by these contractors has been the stress suffered not only by workers but by their families, starting with their life partners. Many of these workers don’t want to return to work due to the potential breakup of families.

The workers decided to carry out their action on May 2, because construction sites were shut down on Sunday, May 1. López stated, “This is the International Day of the Immigrants here in New York. Our action on May 2 is called Liberation Day to show the employers that we are here; we are strong; the community is here with us, and we are demanding structural changes for the better.

“We say that nobody deserves to die on the job. May 2 is the continuation of May 1 especially in this huge industry, when workers die every day because of negligence by employers. This is a worker justice campaign, which means to come face-to-face with the employer, and basically to win a victory against the employer demands a lot of different resources. A campaign for these construction workers will expose all the problematic working conditions and exploitation in the fight to build a better future for these workers and their families.”

López emphasized the need for direct actions like the one on May 2 as a powerful tool to put pressure on the employer to negotiate with the workers and to build community support. This campaign is not only for the workers in New York City, it is a global struggle. You can get more information on the Cabricanecos campaign at: bit.ly/3KvQwXm.