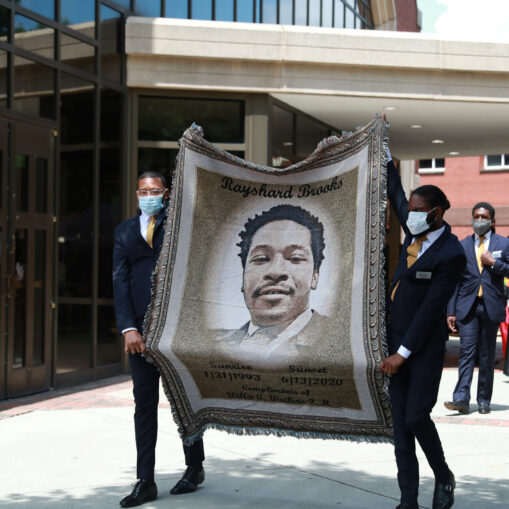 June 12, 2022. The second anniversary of the shooting death by Atlanta police of Rayshard Brooks was marked at the site of the Wendy’s restaurant where it took place. Scores of people from the community — young activists, leaders of multiple organizations, poets and drummers and other family members who have experienced the same loss at the hands of state agents — assembled with flowers, photos, balloons and signs.

Rayshard Brooks, 27-years-old, had fallen asleep at the wheel of his car as he was waiting in the drive-through line. The police were called, and after many minutes of conversation between Brooks and the officer, where Brooks had offered to walk to his sister’s nearby home, a second cop decided to place him under arrest for driving under the influence. Brooks attempted to run away after grabbing the officer’s taser and was shot twice in the back.

At the time, thousands of people responded to this shooting of yet another Black man by shutting down the nearby interstate and occupying the Wendy’s location for weeks. Although the two police officers involved were indicted, no trial dates have been set. In fact two days ago, the cops filed a federal lawsuit charging they were illegally arrested and prosecuted.

The crowd pledged to get justice for Brooks’ family.