Powers is a U.S. war resister from the Vietnam era who emigrated to Sweden, where he has been active in the anti-imperialist movement for over 50 years.

On the weekend of May 21, protesters in 20-odd cities and towns throughout Sweden joined rallies and marches to oppose the government’s decision to apply for membership in NATO. The formal decision to abandon Sweden’s official policy of neutrality, that has lasted more than 200 years, came in the midst of a frenzy of fear whipped up by propaganda about the armed conflict in the Ukraine and an alleged threat to the security of Europe. 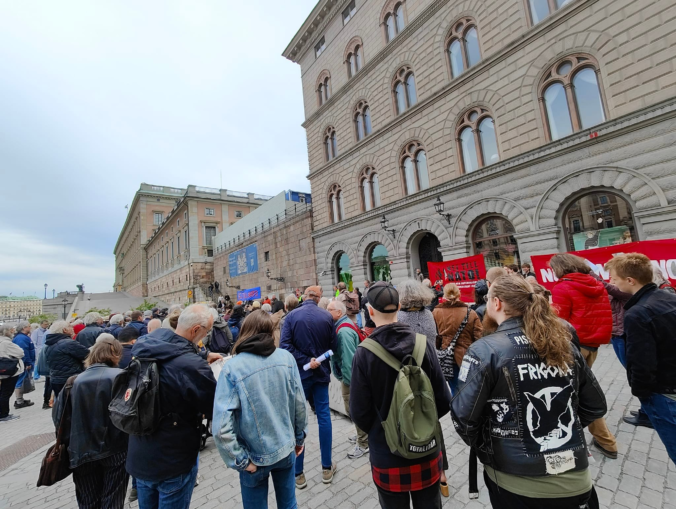 The conservative opposition parties have long favored joining NATO. But a sudden shift in the position of two of the largest parties — the ruling Social Democrats Workers Party (SAP) and the extreme Nazi-inspired Swedish Democrats (SD) — enabled the change in government policy.

The SD is an anti-immigrant, populist racist grouping making inroads in the labor movement. They supported the others on this issue, in hope of being accepted as a respectable element in a new right-wing majority. They even changed their position on admitting no more refugees — as long as the refugees were white Europeans with the same Christian cultural background and not from the Middle East!

The ruling Social Democrats, as recently as their last party congress in 2021, declared that their staying in office would guarantee that Sweden would never abandon nonalignment. During the Cold War, even though it was nonaligned, Sweden was unofficially part of NATO’s northern flank with its huge air force patrolling a large part of Soviet air space.

During the SAP rule, Sweden has moved closer to NATO in recent decades in the Partnership for Peace and U.S.-built coalitions against terrorism in Iraq and Syria. Sweden withdrew its troops from Afghanistan after 20 years, having proved its loyalty and subservience to Washington. The Swedish space facilities in the north were instrumental in guiding U.S. bombing raids against Libya in 2011. Joint maneuvers have been held with many NATO countries, including bombing exercises in Sweden.

Nevertheless, ditching neutrality is causing a sense of identity crisis in Sweden. At times having an independent foreign policy allowed a moral position to be taken, such as in opposing the U.S. war in Vietnam and being the first EU country to recognize the state of Palestine and working to promote nuclear disarmament. Yet last year Sweden refused to ratify the U.N. Agreement on Prohibiting Nuclear Weapons, which it had itself helped write.

The U.S. Secretary of Defense simply warned publicly that signing the agreement would “complicate” military cooperation with NATO. Sweden backed down. The days of an independent foreign policy, already more difficult with EU membership, may soon be gone forever.

There is no concrete Russian threat to Sweden today. Yet the Swedish government says full membership would provide security guarantees with NATO nuclear forces but allow it to prohibit nuclear weapons and any permanent foreign bases on Swedish soil!

Just the opposite is true — it would make Sweden a possible target for Russian nuclear weapons. Now we are told that the Finnish decision to join leaves Sweden with no alternative. But Sweden is a separate country. Joining NATO would turn the Baltic into an internal NATO lake, with 10 countries threatening Russia!

The debate about membership has been mostly one-sided. TV and radio have had panels where pro-NATO participants, mostly military research experts, debate the benefits of joining among themselves. The Social Democrats arranged zoom dialogues with thousands of party members, who had to listen to ministers answer pre-arranged leading questions from anonymous voices but could not ask any themselves. Where voting took place, the results, often negative, were not made public.

The party leadership refers to the back-and-forth, unsure changes in public opinion in the weekly polls. But even these indicate that almost half the population, including a majority of the Social Democrats and the smaller Left and Green parties, is still either against or unsure! Party loyalists who always follow the leader may have shifted opinion, but they may only account for 10% of the voters.

The whole process has been ludicrous and a travesty in democracy. All the major parties are opposed to having a popular referendum, as they see the issue as too complicated and dealing with sensitive security issues. They also oppose waiting until after the planned elections in September and letting the voters decide, in order to lend the decision some form of democratic legitimacy. Many feel steamrolled by the party elite. But they are afraid of direct democracy by the people.

Speakers at the Stockholm protest included Thomas Hammarberg, a former socialist MP and European Council Commissioner for Human Rights; Kajsa Ekis Eknman, a well-known writer and journalist; as well as representatives from the NO to NATO group; Folket I Bild (People in Pictures); Women for Peace; and the Revolutionary Communist Youth.

Those celebrating most are the Swedish arms manufacturers, the merchants of death, including SAAB Dynamics. They see opportunities of selling anti-tank weapons and possibly Swedish fighter jets to coming NATO allies. That Swedish conscripts might have to be cannon fodder in NATO’s wars is not part of their capitalist calculations. And Sweden has already, in broad unity, agreed to increase military spending to 2% of its budget, the new Trump-Biden guideline for European partners.

It may take some time, however, before formal membership is granted. The Turkish regime has suddenly thrown a wrench into the proceedings. It refuses to admit new members unless they treat the Kurdish opponents of the Turkish regime as “terrorists.” The Swedish government has close ties to the U.S.-backed Kurdish enclave in Syria and to Iraqi Kurdistan; the Turkish regime claims these Kurdish entities provide sanctuary to forces of the PKK, which battles Turkish rule. Sweden will not hand over refugees to Turkey. Sweden has also imposed an arms embargo on Turkey in 2019 and helped stop Turkey from joining the EU.

There is great uncertainty about how long the process may take. But it is not yet a done deal.