These CBA ratifications are a huge victory for the working class as a whole, particularly for women and gender-nonconforming and nonbinary people. Both contracts go into effect June 1 and continue until 2028. The language on benefits is identical in both contracts. 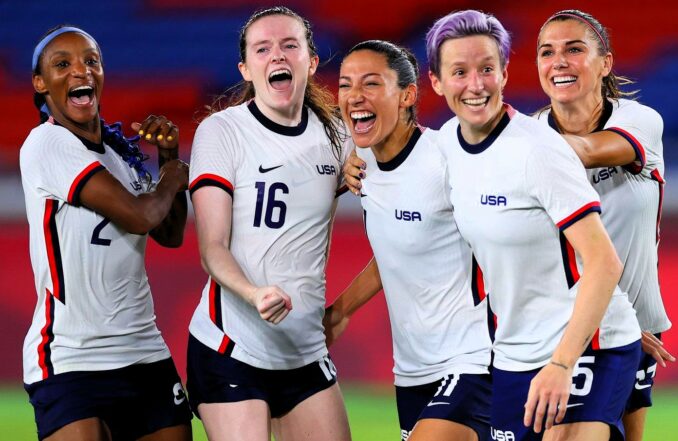 According to a statement from the National Soccer Team Players Association, released on their website the day of the agreements, “The two CBAs . . . achieve equal pay through identical economic terms.” The announcement also states that “the new CBAs improve noneconomic terms, including player health and safety.”

The ratified CBAs feature strong language that make them a first of their kind. Under the new contracts, “U.S. Soccer will pay members of both unions a share of the revenue from tickets sold at U.S. Soccer-controlled home matches and a bonus amount for those games that are sellouts.” There is now equivalent language on child care and parental leave, as well as improvements on retirement. Staffing and workplace security are also addressed.

Unity and solidarity key to win

One reason the groundbreaking CBAs were reached between the unions and the Soccer Federation bosses was the solid unity and solidarity between members of the women’s team players association and the men’s team players association. As Becca Roux, executive director of the Women’s National Team Players Association publicly stated, “We don’t get here without collective action,” in reference to the recent achievements. (Forbes, May 19)

The new CBAs were attained at a time when workers and oppressed people, especially youth, are challenging the profit-driven capitalist system. They are fighting back as the profiteers are trying to raise prices on commodities, while squeezing every bit of labor power out of workers without providing additional compensation. Amazon and Starbucks employees, among other low-wage earners, are collectively organizing and winning.

The contracts were negotiated at a time when the far right is viciously trying to attack trans people who participate in professional sports and to divide athletes in all competitions. Unity among soccer players of all nationalities and genders was key in making history.

It is still common in most, if not all, industries in the U.S. for cisgender men to make higher salaries than women and gender-oppressed people. Workers and oppressed people are realizing from their own experiences that when they collectively fight for better working conditions and pay, they have a much better chance at winning.

Solidarity and raised class consciousness can give our class the ability to smash the sexist and transphobic glass ceiling, one roof at a time!