— Gastaud is political director of Communist Initiative, the newspaper of the Pole of Communist Revival (PRCF), an anti-imperialist communist organization in France. Workers World is making his editorial, which provides an analysis of the French regime and its relation to the European Union and the aggressive nature of the U.S.-NATO offensive, available to U.S. readers. 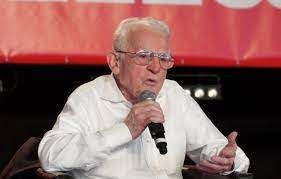 Léon Landini, president of the PCRF and veteran Resistance fighter against the Nazi occupation of France, in 2021. Credit: Communist Initiative

Gastaud dedicated his editorial to 96-year-old Léon Landini, president of the PCRF, son of an undocumented Italian anti-fascist and member of the former FTP-MOI (a Partisan fighting force constituted of emigrant workers who fought Nazi occupiers in WWII). Landini was decorated by France and the USSR for acts of Resistance.

I am writing this without knowing the outcome of the presidential election or the level of West-East tension that will have been reached by the time this editorial is published, the confrontation between Moscow and the EU-NATO pushing for escalation in Ukraine. This degree of uncertainty stems less from the rhythm of IC’s monthly publication than from a series of thresholds that our country is about to cross.

France is in the grip of an existential crisis, with capitalist Euro-globalization yielding to the hegemonism of Euro-Atlantic imperialism, the number one danger to world peace. How then can we [communists] ensure that we will always remain on the right side of the barricade in the fight for peace and for the future of our country?

On a global scale — and without vouching for Putin and the Russian army, who are far less than faithful heirs of the workers’ and peasants’ Red Army — the EU and NATO have since 1991 been building the conditions for a third world war. The expansion of the [U.S.-led] Atlantic EU has been harassing Russia, and the Washington-Tokyo-Seoul-Canberra alliance is provoking China.

Of course, the “BRICS” (Brazil, Russia, India, China, South Africa), whose emergence U.S. President Joe Biden wants to prevent, are politically very diverse. But above all, these large countries, of which Moscow is the military outpost and Beijing the industrial vanguard, objectively carry, not without contradictions, the legitimate aspiration of the majority of human beings (who inhabit Asia, Africa and Latin America) to free themselves from the dollar, the Euro-mark — and the U.S. Army.

Large communist parties, or at least strong “red” traditions, carrying the world’s hope of a new generation of socialism-communism, do remain active in these regions — the CPC’s leadership in Beijing, the Russian CP embodying the popular alternative to Putin, the Party of South Africa with the ANC and Cuba who were the real winners against apartheid — and with communists in the lead of huge general strikes in India!

For us, proletarians of the West, it is our duty to remain firm on this observation: Western imperialism, more and more risking extermination, is ready to promote escalations leading to a nuclear war of annihilation to maintain the hegemony of Wall Street and its European vassals!

In France, the winner of April 24 [Emmanuel Macron] must be opposed without delay, whether it is Macron II, the proxy of the advancing European Empire (German Chancellor Scholz wants a “European federal state” that would put an end to French history) or Marine Le Pen, the figurehead of fascist Euro-nationalism.

Both Macron and Le Pen accept the euro, NATO, the EU, capitalism and Western imperialism and, to varying degrees, court the police state. If Macron is already threatening France with rapid dissolution into the EU-NATO, Le Pen is dividing the working classes and would only bring triumphant state xenophobia to the country of Jean Jaurès and Victor Hugo.

While the decaffeinated French Communist Party of F. Roussel just displayed its impotence to carry a clear anti-EU and anti-capitalist line, while the beautiful dynamic of the “Popular Union” barely conceals the growing submission of the Mélenchon party’s leadership to European imperialism, it is vital to rebuild a fighting communist party. It is urgent to give back to the world of labor its role as the driving force of a red and tricolored Alternative that assumes the nationalization of key sectors of the economy, the total break with the EU-NATO and a new impetus towards workers’ power.

For this, let us strengthen the Pole for Communist Revival (PRCF). Let’s work for the renewal of a trade unionism of struggle, as Communist Initiative [the PRCF newspaper] is doing.

Let us prepare the “great explanation” of the workers confronting the imperialist oligarchy, whether it flies the yellow-blue flag of the European Empire [Macron] or usurps the French flag to divide the country [Le Pen].

Let’s reopen the future; let’s seize the red and tricolor thread of our progressive history!