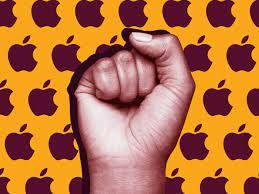 According to union organizers at the Cumberland Mall Apple store, the National Labor Relations Board has set June 1-3 for their election vote. The sales, technical, creative and operations specialist workers made their location the first Apple retail store in the U.S. to file to unionize.

More than 70% of the 109 workers in all departments at that location signed cards as of the April date of their filing with the NLRB. More have signed since then.

Like at Starbucks, customer support for the union drive has been plentiful and appreciated. Anyone entering the store is able to see the bright red wristbands most workers wore, signifying their intention to vote union. News of other Apple stores unionizing includes stores in Towson, Maryland, and the Grand Central location in New York City.

Apple is a $3 trillion company, and its head, Tim Cook, gets a $98 million salary. It is reported that Apple has now hired Littler Mendelson, the same union-busting firm that Amazon uses to intimidate and threaten workers against unionizing.

No matter! Atlanta Apple workers are confident they will win.