Published May 5 in Cuba Debate. Translated by Walter Lippmann for CubaNews and edited by WW. 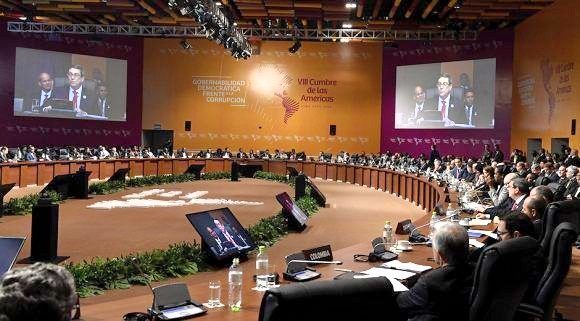 Holding the Summit of the Americas is at risk, warned Ronald Sanders, the ambassador of Antigua and Barbuda, in Washington, D.C., on May 5. Sanders stressed that if the United States insisted on excluding Cuba, this could be an immediate cause for the nations of the Caribbean to skip the event.

Sanders spoke at a webinar in which several panelists examined the policy of the Biden administration towards the Caribbean in its first year in the White House. He said that “If the United States insists on not inviting Cuba to this meeting, it will immediately cause 14 CARICOM countries not to attend, despite the fact that it will be a stage to bring the region’s positions closer to Washington.

“This is not a meeting of the government of the United States, it is a summit of all the heads of state of the Western Hemisphere,” said the diplomat.

He pointed out that “it’s the same if [Juan] Guaidó [U.S. puppet and the pretender to run Venezuela] continues to be recognized – several Caribbean states will not go. The Summit of the Americas is not a meeting of the United States, so it cannot decide who is invited and who is not.”

This week, Cuban President Miguel Díaz-Canel supported the complaint about the possible exclusion of the island nation from the Summit of the Americas, scheduled for June. “The great challenges of humanity are not solved through confrontation and violence, but through solidarity and cooperation,” he asserted.

Likewise, the president of Mexico, Andrés Manuel López Obrador, spoke out for the inclusion of all countries in the Summit. “How is it that we convene a Summit of the Americas, but we don’t invite everyone? So where are the uninvited from? From what continent? From which galaxy? From what satellite?”

Bolivian President Luis Arce called for not excluding any country from the IX Summit of the Americas, because there is a risk that the objectives pursued by the forum will not materialize: “If pluralism is ignored, the principle of self-determination is ignored and the participation of sister countries is vetoed.”

Arce took this position after the head of U.S. diplomacy for the region, Brian Nichols, reported on May 2 that the United States would not invite Cuba, Nicaragua and Venezuela to the Summit of the Americas, to be held in Los Angeles in June.

“The IX Summit of the Americas proposes building a sustainable, resilient and equitable future, a challenge that will not materialize if pluralism is ignored, the principle of self-determination is ignored and the participation of sister countries is vetoed,” Arce said in one of his messages on Twitter.

The Bolivian president added that “there is no excuse at all that justifies the exclusion of the peoples and voices in Our America.” This is why Arce urged that all the countries of the region be invited to the Summit – to strengthen dialogue and integration based on respect for the dignity and sovereignty of peoples.