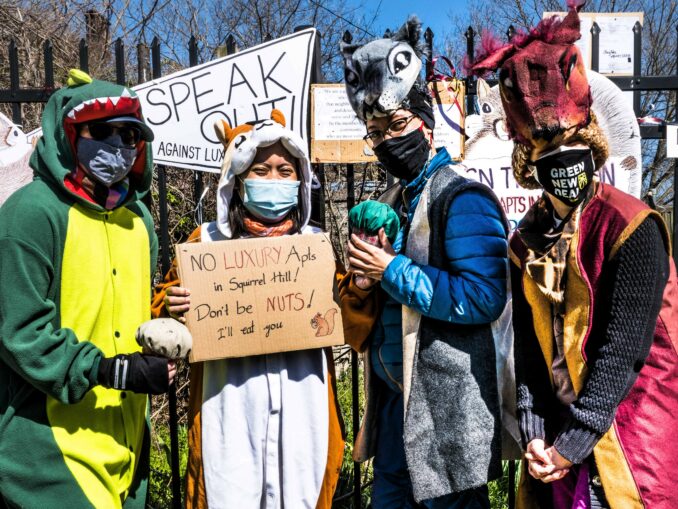 Supporters of Protect Squirrel Hill, a neighborhood coalition in the Squirrel Hill section of West Philadelphia, celebrated a victory May 3 when Court of Common Pleas Judge Anne Marie Coyle ruled in their favor. Coyle reversed the June 2021 Zoning Board of Adjustment’s approval of a variance that would have allowed the building of luxury apartments at 48th Street and Chester Ave.

The ruling highlights the latest chapter in an over 16-month-long grassroots campaign to keep neighborhood rental costs affordable.

Coyle found that the zoning board “failed to clearly identify any factual evidence” that not granting variances for the building would result in “unnecessary hardship” for the developer. (WestPhillyLocal.com, May 6).

The developer, Meir Gelley, planned to construct the market-rate, luxury, 76-unit building on the site of a former dog park. He hoped to combine several adjacent land parcels he owns, including the site of an existing nursing home.

Neighbors in Squirrel Hill first became aware of Gelley’s plans to build the luxury apartments in December 2020. They contested the proposal at multiple community meetings, including one in March 2021 with a vote of 64-to-5 against the building.

Protect Squirrel Hill was led by low-income renters, most of them LGBTQ. The all-volunteer group circulated a petition, which they submitted to the zoning board, with hundreds of signatures of neighbors opposing the project. Sixty-three of those who signed live within 250 feet of the proposed project.

Residents canvassed door-to-door talking with neighbors. They hosted a cookout and speak-out for neighbors to share concerns about the impacts of gentrification and rising rents. They continued the pressure through phone calls to politicians and press releases.

In April 2021, the coalition staged a rally of 75 people speaking out against the luxury apartment building and prepared neighbors to testify at the Zoning Board of Adjustment’s hearings. The main concern of residents in this vibrant, diverse neighborhood was that the proposed exorbitant rents for the luxury apartment building would end lower rents prevalent in the neighborhood.

Cindy Lou is a resident in a 40-unit apartment building constructed in 1925, directly across the street from the site of the proposed development. At the rally she said: “I see myself and others in my building being displaced if this gets built. Most people I’ve spoken with in my building pay around $750 per month for a one-bedroom. The monstrosity they’re proposing across the street will charge twice that.

“Once they start leasing for those prices, other landlords will follow,” she explained. “Older, long-term residents like myself will get pushed out. I’ve been in this neighborhood for 35 years. I’m organizing with my neighbors because none of us can afford this.”

Zoning board shuts down opposition

Despite the overwhelming opposition to the project by neighbors, in June 2021 the zoning board approved the requested variances. At the hearing, developers promoting the project were given unlimited time to speak, while the board chair repeatedly silenced, denigrated and patronized community members who attempted to voice opposition to the development.

The coalition responded to this setback by getting a lawyer to challenge the ruling.

The May 3 ruling has not ended the project for ever. The court remanded the case back to the zoning board to conduct additional fact-finding proceedings. Still, Squirrel Hill neighbors see this as a win.

Quoted in a press release issued by the coalition, Susanna Martin, who has rented an apartment in Squirrel Hill for 16 years, said: “This ruling is an important victory for our neighborhood and for anyone in this city who benefits from or cares about affordable housing. New high-rent apartments would drive up housing costs for all of us, pushing out low-income tenants and disproportionately impacting elders and people of color, especially long-term Black residents. The zoning board now has a second chance to do the right thing and stop this project.”

Squirrel Hill neighbors aren’t leaving it up to chance. Through organizing and lobbying efforts of the Project Squirrel Hill and its allies, a Charter Change Referendum regarding the zoning board will be on the ballot in the upcoming Philadelphia May 17 primary. The coalition urges people to vote “YES,” noting that passage will help ensure that the zoning board will no longer treat residents “with the disrespect and dismissal that we experienced at our hearing last year.”

Protect Squirrel Hill supports the principles of community care, nondisplacement and protecting the vibrant, diverse neighborhood of Squirrel Hill from the atrocities of gentrification. They can be contacted at [email protected]