The Western corporate media has been working overtime to demonize and disparage Russian President Vladimir Putin following the Feb. 24 Russian intervention in Ukraine.

Whenever imperialist powers have their scopes set on overthrowing a sovereign government, they tend to follow a predictable trend, such as crying foul over “human rights,” questioning the mental capacity of its highest-ranking leader and making cliché comparisons to hated historical figures like Hitler, regardless of context. The current vilification campaign against Putin — and the xenophobic attacks against Russian people that go along with it — are perfect examples of this deliberate propaganda campaign.

On the flipside of a media barrage of Russophobia, there is the uncritical promotion of Ukraine, and even Ukrainian nationalism, which ignores the atrocities committed by the current government in Kiev. Rarely stated is the fact that the Ukrainian government is the product of an illegitimate 2014 coup, carried out by fascist hooligans with the financial blessing of the U.S. and NATO.

Now since early March, several Ukrainian dissidents – opponents of the Kiev regime – have either been arrested or kidnapped by the government Security Service of Ukraine, known as the SBU, and the Western media has been silent. A Grayzone April 17 article claims, “Pro-Western monitors, including the United Nations Office of the High Commission and Human Rights Watch, have accused the SBU of systematically torturing political opponents and Ukrainian dissidents with near-total impunity.”

“The U.N. OHCR found in 2016 that ‘arbitrary detention, enforced disappearances, torture and ill-treatment of such conflict-related detainees were common practice of SBU.’ . . . A former Kharkiv SBU officer explained, ‘For the SBU, the law virtually does not exist, as everything that is illegal can be either classified or explained by referring to state necessity.’”

The mysterious case of Gonzalo Lira 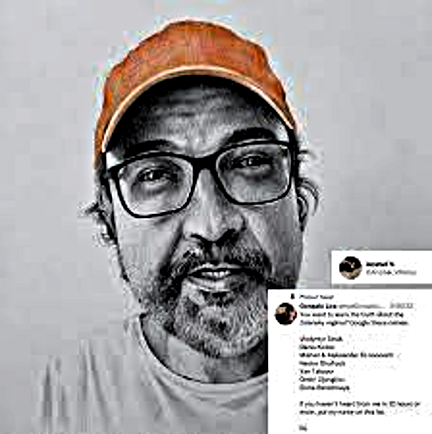 Anti-imperialist activists around the world were relieved on April 22 to discover that Chilean journalist Gonzalo Lira was still alive, after Lira had gone missing in Ukraine exactly one week before. People first became alarmed when he did not appear on his scheduled slot of the “The Galloway Show,” hosted by antiwar former Member of the British Parliament George Galloway, on April 17.

Lira is a critic of the post-coup regime in Kiev, as well as its president, Volodymyr Zelensky. In a chilling March 26 tweet, Lira wrote, “You want to learn the truth about the Zelensky regime? Google these names,” and he dropped names of several other Ukrainian critics who have been kidnapped or murdered by the SBU. He concluded: “If you haven’t heard from me in 12 hours or more, put my name on this list.”

On the day Lira resurfaced, he appeared on a podcast hosted by Alex Christoforou of The Duran and said, “I’m in Kharkiv. I was picked up by the SBU on Friday, April 15. I’m okay physically. I’m a little rattled. There are a lot of other people who are frankly more deserving of attention. Those people matter more. We don’t know where they are, and some of them have been killed.”

Who are the people on Lira’s list? What happened to them?

The people Lira referred to are in his haunting late March tweet. The first SBU victim mentioned is Vlodomyr Struk, a well-known mayor of Kreminna, a town in the Lugansk People’s Republic, who was kidnapped and murdered March 2.

The second person on the list is Denis Kireev, a top member of the Ukrainian negotiating team killed in broad daylight in Kiev, after the first round of talks with Russia, allegedly by the SBU. (Grayzone, April 17)

Also on Lira’s list are Mikhail and Aleksander Kononovich, two brothers who are leaders of Leninist Communist Youth, the youth wing of the banned Communist Party of Ukraine. Mikhail Kononovich, the First Secretary of the LCY, has been a target of Ukrainian nationalists ever since the 2014 NATO-sponsored coup.

Mikhail Kononovich was one of many people severely wounded after a physical attack on Communist Party headquarters a few weeks after the violent takeover. According to the World Federation of Democratic Youth, the brothers were arrested and detained March 6 and are being held at a pretrial detention center. Their condition is unknown.

On Lira’s list after the Kononovich brothers is Nastor Shufrych, a Ukrainian parliamentarian apprehended March 4, followed by Yan Taksiur, a journalist popular within the Ukrainian Christian Orthodox community. Taksiur was rounded up by SBU forces in Kiev on March 10 and detained without any official charges. (Union of Orthodox Journalists, March 13)

The next-to-last person Lira lists in his tweet is Dimitri Djangrov, a Ukrainian journalist and businessperson. The last person named is Elena Berezhnaya, a famous Russian pair skater.

On March 19, Russian official and triathlete Dmitry Polyanskiy tweeted, “We are extremely worried about the fate of Ukrainian human rights defender and anti-fascist activist Elena Berezhnaya, who was taken by #Ukraine’s Security Services (SBU).” Much like the Kononovich brothers, there is little information regarding the status of Djangrov and Berezhnaya.

Russian Foreign Minister Sergey Lavrov has stated that, in addition to recognizing the autonomy of the Donetsk and Lugansk People’s Republics of Donbass, Russia is fighting Nazi influence in Ukraine and a propaganda crusade to make Stepan Bandera — a Nazi collaborator during WWII — a national hero throughout Ukraine. (Newsweek, Feb. 28).

During World War II, most Ukrainians sided with the USSR and not with the Nazis, despite current attempts to make Bandera some kind of hero.

Now Ukrainian officials have been bragging about “decommunization,” a pro-capitalist attack against socialism that started with the counterrevolution against the Soviet Union in 1991 and that intensified shortly after the 2014 overthrow of former Ukrainian President Viktor Yanukovych.

According to a report from the Indian Marxist journal, The International, “Decommunization rules were introduced in 2015 to prohibit communist iconography, and the electoral commission decided that the Communist Party of Ukraine (KPU) would not be allowed to run in the 2019 elections.” (March 10)

The targeting of some of these parties threatens the security of the trade unions affiliated with them, despite Zelensky being portrayed as a “liberal darling” by the West.

Statues and monuments representing national liberation, socialism and workers’ power have been destroyed throughout Ukraine. Workers World has featured articles about the destructive and murderous actions of anti-communist forces within Ukraine since the destruction of the USSR, including interviews with people who fought back against those forces of reaction in 2014.

In May 28, 2021, a Workers World article, “U.S., EU threaten Belarus while defending pro-Nazi forces,” pointed out how reactionary Belarussian oppositionist Roman Protasevich joined the pro-Nazi Azov Battalion — the official regiment of the Ukrainian National Guard — for a 2014 photo op of this group destroying a statue of Bolshevik revolutionary leader, Vladimir Ilyich Lenin.

Recently a statue of Lenin taken down by the Ukrainian government in 2015 was reconstructed two days before the late revolutionary’s 152nd birthday. On April 20 “Coordinamento Ucraina Antifascista” posted a photo of the statue on Facebook with this comment: “Under the flag of Victory, the statue of Lenin restored after the liberation of the city of Genichesk, in Kherson region.”

There is a crusade of Ukrainian nationalists and proponents of Stepan Bandera to silence their critics, ban moderate-to-left opposition and even murder some of their challengers. Unfortunately, there are many progressive-minded people, particularly in the West, who are reaching erroneous conclusions and pointing blame in the wrong direction.

Genuine anti-imperialists and Marxist revolutionaries who care about the Ukrainian and Russian working classes and oppressed peoples need to demand: Self-determination for People’s Republics in Donbass! No arms to Ukraine!