April 27 — Shock waves were no doubt felt at tech giant Apple headquarters when workers at the Cumberland Mall Apple retail store in Atlanta made national news with the announcement that they had filed for an National Labor Relations Board election — the first Apple store to do so in the U.S. 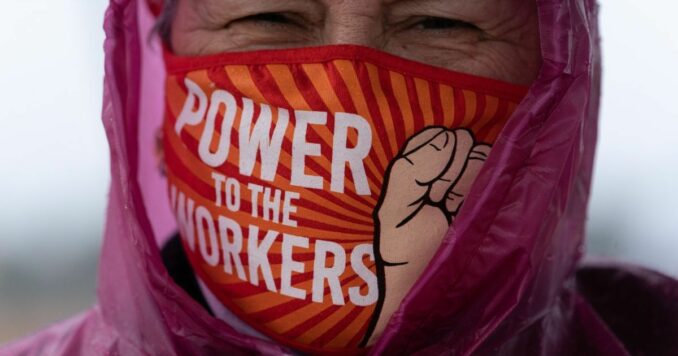 According to a press release issued by the Communications Workers (CWA), more than 70% of the 107 employees at the store have already signed union cards.

One worker voiced excitement at the union push with a request to get a photo of this writer in her “Power to the Workers” face mask during a visit to the store.

Derrick Bowles, a member of the union organizing committee, said the first Bessemer, Alabama, drive at that Amazon warehouse in 2020 had inspired him to think seriously about the need for a union at his workplace.

Although these workers are skilled at dealing with customers’ technical questions and requests at a fast pace, their pay is less than what they need to afford the current outrageous housing costs, the rising price of food and other necessities. And like most workplaces, work conditions and lack of respect by management are matters of worker discontent.

Almost simultaneously with the Atlanta organizing, workers at the Grand Central Station Apple store in New York City announced their intentions to unionize.

There is no doubt that the deteriorating conditions of workers, literally worldwide, along with the bold and successful victories of Starbucks Workers United and the Amazon Labor Union, have motivated many workers to think: “If they can do it, so can we!”