By now you’ve probably seen the video, if you can bear to watch yet another horrifying, racist police assault on a person of color. Three massive white cops are terrorizing and shoving around — an eight-year-old Black child. 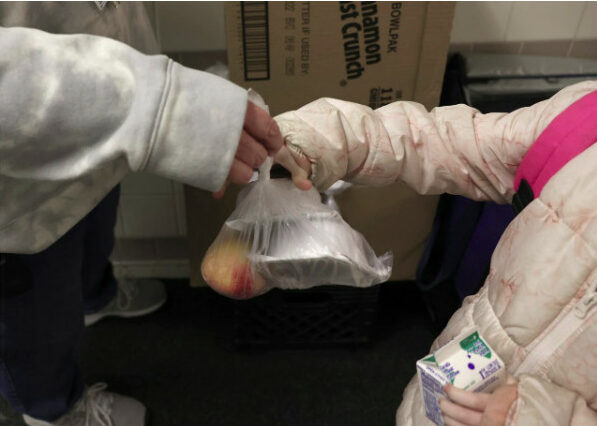 Breakfast is handed out at Dr. Weeks Elementary School, Syracuse, New York, with the highest child poverty rate of any city its size in the U.S.

A week ago, in this city where I live, Kenneth Jackson videotaped the cops manhandling and shoving the wailing boy into a patrol car. Jackson challenged the police repeatedly, saying, “What are y’all doing? He looks like a baby to me, and you’re snatching him off the street. What are y’all doing? For a bag of chips, you treating him like a — cold-blooded killer.”

The cops are defiant, barking “Keep walking,” “He’s stealing,” “Are you going to pay for what he takes?” Jackson says, “Yes, he’s a kid!” And in the background someone, maybe another child, says, “It wasn’t him.”

The cops drive off with the child, whose fate is unknown to those watching.

For all we know, he will be suddenly, “accidentally” dead like Tamir Rice, who was 12 years old when he was killed by cops for just being a boy, fiddling with his toy gun, in a playground in Cincinnati.

Or almost asphyxiated, like the 12-year-old Black girl in Kenosha, Wisconsin, this March, when a cop knelt with his knee on her neck — the same “subduing” move that killed the adult George Floyd in nearby Minneapolis. Or body-slammed, like a young Black girl in 2021 by a white “resource” officer in Florida. Or handcuffed with extensive injuring force, like the 10-year-old Black girl seized by a white cop in Honolulu in 2020. (The Root, April 21)

Like any of the thousands of Black children hurt and killed by the forces of white-supremacist “law” and vigilantism in the U.S. over the last 400 years.

Since then, the Syracuse police chief has resigned — with no reference to this outrage as a reason. His replacement defended the cops as doing “Community Policing 101.” Excused because they didn’t handcuff or arrest the eight year old, but “took him home” — to intimidate his father, who works two jobs, takes care of a sick wife and tries to keep his family together.

Yes, this is “community policing” — where it is blatantly obvious that the cops’ job is to protect property, not people. Three cops throwing an eight-year-old child around because of a bag of Doritos.

And did anyone ask the child if he were hungry? The Census Bureau ranks Syracuse number one in child poverty in the U.S. for a city its size. (syracuse.com, March 27) The city school in my neighborhood has an entire “resource” room filled with backpacks, shirts and pants, sneakers, socks, soap, deodorant, toothbrushes, shampoo, barrettes, school supplies. Because the school not only feeds the children, the teachers clothe and care for children who come to school every day with nothing.

Terrorizing a child over a bag of Doritos is the early stage of a police technique to beat down and subdue the resistance of people who have been oppressed beyond the breaking point. In some states, legislation is actually being passed to prohibit the teaching of historic resistance against racism — called the anti-CRT laws.

This time the child got home alive — likely thanks to Mr. Kenneth Jackson, who kept insisting “What are y’all doing?” and focusing his camera, his questions and his anger.

It’s past time to let our anger flow and focus against this white-supremacist, exploitative, child-hating capitalist system — and against the cops who enforce its property and profit.