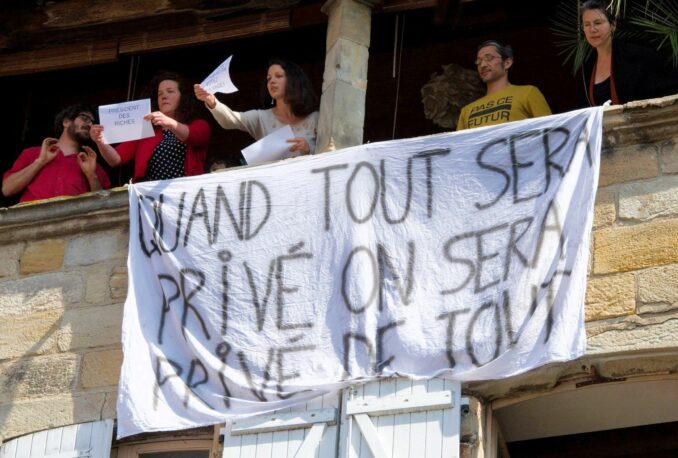 When President Emmanuel Macron spoke in the central square of Figeac, a small town in southwestern France, April 22, the last day of campaigning, his security censored any critical signs. But people in the apartments around the square dropped this banner: ‘When everything is privatized, we are deprived of everything.’

The two bourgeois parties which have alternated in running France ever since de Gaulle instituted the Fifth Republic in 1958 have evaporated. Their pitiful descendants together got less than 6% of the vote in the first round of the presidential elections April 10. That meant they neither made the second round nor received government funding.

Macron’s record is filled with attacks on the working class. He raised taxes on gasoline and diesel, which set off the Yellow Vest movement at the end of 2018. This movement produced tens of thousands of protests, mainly in rural areas of France, over a broad range of issues — fuel prices, a tax on wealth, police violence and raising the minimum wage. It’s estimated that 3 million people participated. Macron’s government had police fire rubber-coated bullets at demonstrators, injuring thousands, many of whom lost an eye.

Macron changed the labor law so that it was easier to fire workers. He tried to raise the age of retirement.

One common charge against him is that he is “a president of the rich,” unsurprising considering his career as an investment banker at Rothschild & Co. He has vigorously pursued neocolonial interventions in the African countries which are former French colonies.

Le Pen proposed laws making it legal to discriminate against people whose national identity is not French. She advocates legalizing discrimination against Muslims — there are around 6 million Muslims living in France — against women (with a total ban on abortion) and against immigrants.

She has made a big point of promising to improve workers’ incomes by lowering the value-added tax — a sales tax — on consumer goods.

In her concession speech after the results were announced, Le Pen said that although she didn’t win, the far right did have a victory of sorts in that over 40% of French voters supported it. But while over 40% of French voters who went to the polls did indeed support Le Pen, the number of voters who stayed home, or cast blank or spoiled ballots, was the highest since 1969. Many progressives refused to vote for either candidate.

The Greens, the Socialist Party, the Communist Party and the Republicans all issued calls for their supporters to vote for Macron, to create a “republican bloc” against the far right.

Jean-Luc Mélenchon and his party, La France Insoumise (France Unbowed), who narrowly missed the second round coming in a close third to Le Pen in the first round, called for “no vote for Le Pen” but refrained from endorsing Macron.

Calls for a third round

A group of trade unions considered to be moderate has called for a major push at the May Day events to defend the interests of all French workers.

A group of small left parties and anarchist groups have called for a Third Round of struggle in the streets. In Toulouse, Marseilles, Strasbourg and Paris, hundreds of people came out to protest and confront the police April 24 after the results were announced.

Putting forward their version of Round 3, Mélenchon and France Insoumise, along with the Union de la Gauche (Coalition of the Left), have announced a campaign for Mélenchon to run for the post of prime minister in the parliamentary elections in the middle of June.

The class struggles that have been roiling France the past few years will continue, despite the election results.