Starbucks workers from across the Seattle area and the U.S. marched and rallied April 23 against union busting. Starbucks billionaire CEO Howard Schultz’s “break the union” campaign has led to many firings, followed by strikes and more organizing. 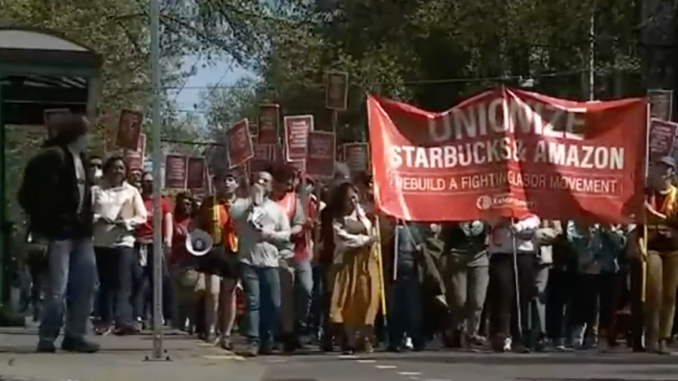 Hundreds march in Seattle in support of workers unionizing at Starbucks and Amazon, April 23.

The Seattle action was organized by insurgent Starbucks Workers United (SWU), along with the office of City Councilperson Kshama Sawant, and was supported by Socialist Alternative, the Democratic Socialists of America and a number of unions.

The march celebrated a tremendous union victory April 21 at the coffee giant’s flagship Seattle Roastery on Capitol Hill, which does ​​a $20-million retail business annually. That store is nine blocks from the original Pike Place Starbucks.

With 100 workers eligible to vote, the workers voted 38-27 to certify unionization through the National Labor Relations Board with SWU.

This hit Schultz in the heart of the Starbucks empire — that Seattle facility was the first roastery he opened, in 2014. A Roastery worker said Schultz visited this store himself two or three times a week, for a long time.

The chanting workers marched from Capitol Hill to Westlake Center downtown. There were solidarity contingents from the Seattle Education Association, Service Employees International Union Local 925, United Auto Workers Local 4121, International Brotherhood of Electrical Workers Local 46 and the Alphabet Workers Union of Google, along with other groups.

Councilperson Sawant applauded the local SWU win and, as well, as the huge recent victory of the Amazon Labor Union in Staten Island, New York. She supported the call for a joint national action with SWU and the ALU on upcoming May Day — or any other time in the future.

Many Starbucks workers there had been fired for organizing, like those from Michigan and Overland Park, Kansas, but said they were continuing to organize. Beto Sanchez of the Memphis 7 — organizing committee members who were fired — related the Memphis connection to a history of struggle. Some of the young workers joining the Starbucks union had grandparents who marched with Dr. Martin Luther King and the striking sanitation workers in 1968, just before his assassination.

Many of the workers from the Seattle, Olympia and Marysville, Washington, stores had had successful three-day strikes the previous week. Starbucks worker-organizers spoke who had come from Kansas City, Kansas; Phoenix; New York state; Michigan; and western Washington state.

They were all together in Seattle, as the workers ‘roll the union on!’