When it comes to busting unions, there’s no shortage of tricks that a boss will use to mislead and intimidate potentially pro-union workers. High on the list are mandatory “captive audience” meetings. Up until now the National Labor Relations Board has allowed companies to require attendance at these meetings — held when workers are on the clock — and force workers to suffer through a negative, one-sided presentation. 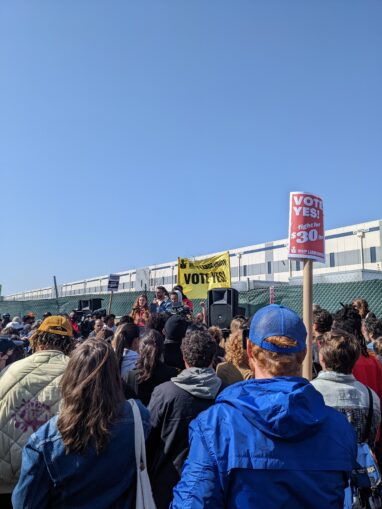 While workers seeking union representation wait weeks or months for the NLRB to schedule an election, a union-busting corporation such as Starbucks or Amazon can use the wait time to propagandize in favor of a vote against the union. Facing retaliation — even firing — if they do not attend, workers really are held captive during these obligatory sessions.

One might think this would be illegal under Section 7 of the 1935 National Labor Relations Act, which grants “the right to self-organization,” and Section 8(a) which deems it an Unfair Labor Practice for an employer “to interfere with, restrain or coerce employees in the exercise of the rights guaranteed in Section 7.” (nlrb.gov)

Now at long last, NLRB General Counsel Jennifer Abruzzo purportedly agrees. In an April 7 memo to the Board, she states: “The Board years ago incorrectly concluded that an employer does not violate the Act by compelling its employees to attend meetings in which it makes speeches urging them to reject union representation” and adds she “will urge the Board to correct that anomaly.”

Abruzzo cites a 1948 case allowing the mandatory meetings. Now she has counseled the Board to abandon that 74-year-old precedent.

Four days later on April 11, Abruzzo’s office filed a brief in a current case, involving the Teamsters union (IBT) and a West Coast cement company that could have an even greater impact for workers trying to unionize. The brief called on the NLRB to “revisit its decision in Linden Lumber Div., Summer & Co. and reinstate the doctrine under Joy Silk Mills, Inc., prospectively, because the Board’s current remedial scheme has failed to deter unfair labor practices during union organizing drives and provide for free and fair elections.” (aboutblaw.com/2wC)

What is significant about the Joy Silk doctrine — which came out of a 1949 case but was overturned in the 1974 Linden Lumber case — is that it mandated that an employer generally had to recognize a union by “card check.” Before the 1974 ruling, if a majority of workers signed union authorization cards, the company could only require a secret ballot election if it demonstrated a “good faith doubt” that a majority of eligible employees had actually signed cards.

There are currently many examples of unions collecting cards signed by a majority of workers, only to later lose a representation election. The NLRB election process gives the boss time to misinform and scare enough workers into voting “no.”

If the NLRB votes to ban mandatory captive audience meetings and/or reinstate Joy Silk, that will give unions a huge advantage in organizing campaigns. But until the Board votes, it’s union busting as usual.

Abruzzo, formerly on the legal staff of the Communications Workers union (CWA), was appointed NLRB general counsel in February 2021, after President Joe Biden fired Trump appointee Peter B. Robb. However, there have been plenty of attorneys in her position who were appointed by Democratic presidents, yet took no action to reverse Board practices that undermined unions. Why now?

What has made a change is the current labor upsurge being led by Starbucks and Amazon workers. Even before the memo and brief from Abruzzo’s office, some unions, including the Teamsters, were weighing the idea of skipping the election process altogether and going on strike if an employer refuses to recognize the union via card check.

A political appointee is not so likely to make concessions to labor, when there is a lull in the class struggle — but the same individual may feel compelled to take a progressive position when unions are on the move.

In fact, the NLRB might be overwhelmed by the growing number of workforces filing for representation elections. Since April 1 alone there have been over 200 separate filings, 15 just on April 21. The surge in the month of April includes over 50 Starbucks stores across the country.

Clearly, the class struggle is putting tremendous pressure on the ruling class.