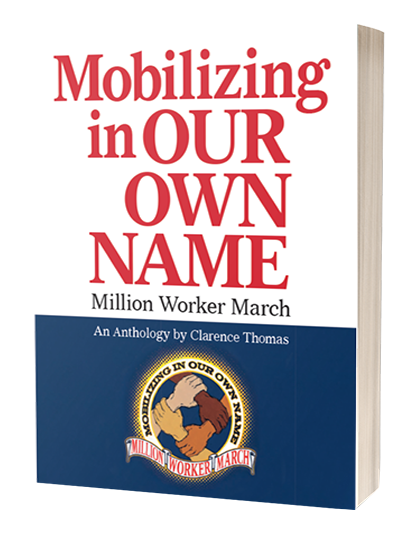 Mobilizing in Our Own Name:
Million Worker March –
An Anthology by Clarence Thomas
DeClare Publishing, 2021

In a commentary introducing his anthology on the 2014 Million Worker March and its impact, Clarence Thomas writes: “On January 15, 2014, when he called me, brother Trent [Willis, now president of International Longshore Workers Union (ILWU) Local 10] was a young, emerging, rank-and-file leader and business agent for the local. He wanted my opinion on an idea: What did I think of organizing a Million Worker March in Washington, D.C.?”

The rest, as the saying goes, is history. But until the publication of Thomas’ book last year, the history had never been properly told.

The march, an ambitious undertaking, succeeded in spite of opposition from the leadership of the AFL-CIO. John Sweeney, at the time AFL-CIO president, sent a letter July 13, 2004, to ILWU Local 10’s President Henry Graham stating “we believe that devoting resources to a protest demonstration a few weeks prior to the presidential election is a diversion that our movement cannot afford.” Sweeney had been elected president in 1995 on a promise to devote extensive resources to organizing the unorganized, but these resources were diverted to supporting Democratic Party candidates such as 2004 presidential candidate John Kerry.

A month later U.S. Labor Against the War informed march organizers that its Leadership Council opted not to endorse: “the reason that affiliates decline to endorse was its timing.” USLAW missed a prime opportunity to ally with a labor demonstration that was unapologetically opposed to the U.S. war against the Iraqi people.

These misguided statements are included in the first chapter, along with many letters of support for the march and the extensive endorsers list. Chapter 2 gives the reader a feel for what took place October 17, 2004. 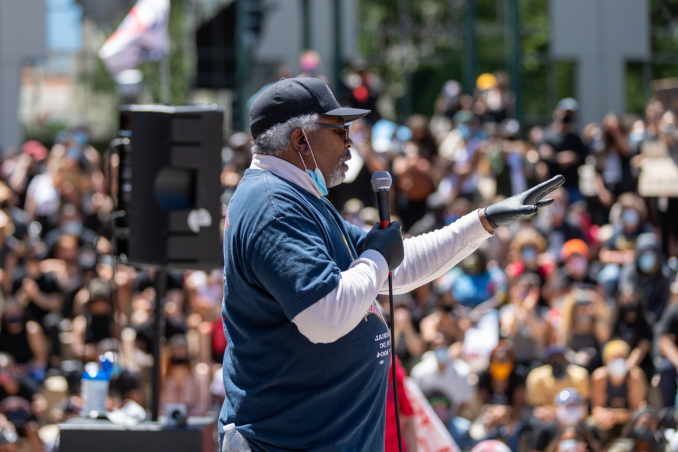 “Mobilizing in Our Own Name” is not a typical anthology, with 10 or 20 essays by a range of noted authors. Instead Thomas has assembled 300+ pages of articles, leaflets, letters, statements and photographs. Many of the articles are lifted from the pages of Workers World newspaper.

Local 10’s sharp divergence from “business unionism” is a thread running throughout the book. In a 2005 statement released after a group of major unions left the AFL-CIO to form Change to Win, MWMM identified “central questions of concern to the rank and file” including “how to transform and make the existing top-down structure business unionism democratic.”

Millions More Movement to May Day

The next chapters are each devoted to a different aspect of MWMM/Local 10’s militant, class conscious activism: demanding reparations for Hurricane Katrina survivors, Reviving May Day from 2005 onward, fighting white supremacy, International solidarity, a conference on socialism, supporting justice for oppressed genders, the historic and current role of the ILWU, joining with Occupy Oakland, and ongoing struggles Local 10 has been recently engaged in.

Among the organizers mentioned are Local 10 leaders like Thomas, Willis, Leo Robinson, Keith Shanklin and the ILWU’s first president, Harry Bridges – an anti-racist labor leader whose legacy lives on in the “shut it down” tradition that set itself against apartheid in South Africa and in the Zionist state of Israel, demanded freedom for political prisoners Angela Davis and Mumia Abu-Jamal, supported striking dockworkers in the Pacific Northwest, backed resistance to anti-labor legislation in Wisconsin, protested racism on and off the job, and, in 2020, shut down ports on Juneteenth in solidarity with the Black Lives Matter upsurge.

Clarence Thomas is starting a book tour in May. For more information or to buy the book go to millionworkermarch.com.

Martha Grevatt is a retired autoworker who served on the executive boards of United Auto Workers (UAW) Locals 122 and 869. She organized Cleveland activists as well as several coworkers to attend the Million Worker March in 2004.