During a spate of mass public shootings in the last few weeks – from Sacramento, California, to Syracuse, New York – an April 12 attack in the New York City subway system received frenzied attention. News outlets ran bystander videos that shocked with screams and blood.

But NYC’s ex-cop mayor, Eric Adams, has had only one “solution” to the problems of ordinary people who live in the city: Impose “law and order” by sending in more cops. More conflict in public places? His answer was to redeploy police from desk jobs onto the streets.

The NYC shooter himself, Frank James, diagnosed what really needs to be fixed. James recorded hours of social media video about his own struggles with post-traumatic stress disorder and inability to access treatment, saying: “Mr. Mayor, let me say to you:  I’m a victim of your mental health program in New York City.” (New York Post, April 13)

After the attack Mayor Adams finally had to concede that more “psychiatric beds” are needed. But what he has actually been doing is attacking oppressed and working people struggling with homelessness, eviction, crushing job loads and lack of health care of any kind – physical or mental.

This “law and order” mayor is renewing the old “broken windows” policy of right-wing Mayor Rudy Giuliani – to make the town “safe” for tourists and for those whose wealth is growing ever greater.

Adams has set cops to breaking up encampments of unhoused people, tearing up their pitifully few belongings. As of April 1, cops had “cleared” – demolished – about 250 homeless settlements. A law forbidding anyone from sleeping on the subways gives cops a free hand to menace and evict people seeking shelter there. (Amsterdam News, April 7) 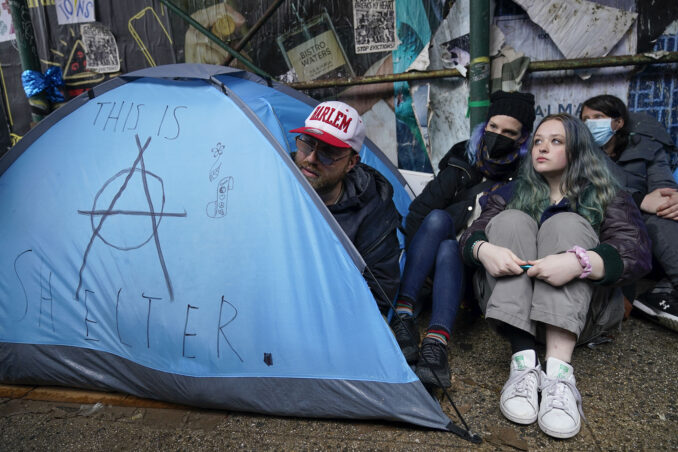 Seven homeless people and supporters, defending an encampment at Avenue D and Ninth Street, were arrested when cops swept through to demolish the living space in the East Village, New York City, April 6.

During the two years of the COVID-19 epidemic, NYC landlords have filed to evict over 100,000 people. The same trend is apparent across the U.S. The evictions overwhelmingly harm single mothers, older people, people of color and poor people. These are the people with the least resources, the people likely to be sheltering somewhere in the subway system and in unhoused encampments. (evictionlab.org/eviction-tracking)

Even housed workers are now vulnerable if they nap coming home from a job – an act common on the subway throughout its history.

Police can throw a sleeping person off at any stop. All the cops have to do is “advise them to get help.” And where is the help?

The cops are not there to help – certainly never “to serve and protect” working people. Cops exist to protect property and protect those who own the property – the capitalist class.

In past years there have been militant actions to support and assist New York subway riders who have disability issues. Groups organizing have been The People’s MTA, Rise & Resist, People’s Power Assembly-NYC, the Straphangers Campaign and the Brooklyn Center for the Independence of the Disabled. Members of Disabled In Action, TransitCenter and UP-STAND, an advocacy group for pregnant women and families, have also participated. (See Workers World coverage.)

Now is the time for grass-roots action to defend subway riders who are evicted, houseless, neurodivergent or in need of physical or mental health services. And yes, for defense of tired workers who just need to sleep on the subway going to and from their exhausting jobs.

No evictions! No subway cops! Housing and health care are a right for all!