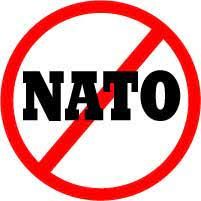 The U.S.-commanded military alliance called the North Atlantic Treaty Organization – NATO, was founded April 4, 1949. Its initials describe its early geographic reach but obscure NATO’s intent, and how NATO has acted, first from 1949 to 1991, and later from 1991 to the present.

From its founding moment, NATO was an aggressive military apparatus to coordinate the police and military and intelligence apparati among the ten founding West European member countries (plus U.S. and Canada) under U.S. command. NATO’s past 30 years of steady expansion is tied to its original purpose as an imperialist weapon against the working class.

The 1991 broken promise by Secretary of State Baker, echoed by many other Western politicians, to Soviet Prime Minister Gorbachev that if the reunification of Germany went forward “NATO would expand not one inch to the East” is often quoted today in discussing the encirclement of Russia and the root of the war in Ukraine.

What needs to be understood is why did NATO expand? Why was NATO’s expansion inevitable?

NATO expanded because the capitalist markets expanded. The defeat of socialism in Eastern Europe and the dismemberment of the Soviet Union and the auctioning off of formerly nationalized public property and industries was only possible with an enforcement organization.

Just as the U.S., as the center of finance capital, is held together by the largest repressive state apparatus, the largest internal police force, and the largest prison system in the world.

NATO’s founding principle was to ensure a strong U.S. military, political and economic presence in Europe. There was no plan to end the U.S. military occupation of Europe. Its stated purpose from its inception was a military alliance against the Soviet Union.

NATO claimed to be a collective security arrangement against Soviet expansion, even though the Soviet Union was hardly expanding. It was devastated by World War II and had suffered the overwhelming majority of the losses in human life (27 million) and in industrial capacity. Over 700 cities and towns lay in total ruin. Refugee camps and rationing dominated daily life.

The border between two social systems

But the fact that the Soviet Union had survived was threatening to the capitalist class.

In all the countries liberated by the Red Army from Nazi Germany’s occupation in Eastern Europe workers organizations were attempting to reorganize society. Only by organizing on a non-capitalist basis could they defend their countries from absorption by Western imperialism.

Former British Prime Minister Winston Churchill had spoken in Missouri in 1946 denouncing this development and labeling it an Iron Curtain dividing Europe. His speech was a rallying cry to wall off all economic trade and technological assistance to the entire region the Red Army had liberated.

Capitalist domination of Western Europe was in question. What was labeled as Soviet expansion, imminent Soviet invasion, the Red Scare (with a media frenzy that matches today’s against Russia), was the growing influence of workers’ movements in Western Europe.

The organized power of the working class and of Communist parties was rapidly growing in national parliaments, city councils and powerful unions in war-torn Western Europe, especially in Italy and France. Communists had been the largest force in resistance to the Nazis during the years of German occupation.

In Greece the Communist Party, who had led the anti-fascist resistance, was openly contending for state power. From 1945 to 1949, U.S. and British active intervention in the Civil War in Greece, equipping and helping to coordinate the weak rightwing and monarchist forces, was crucial for defeating the Greek workers’ movement.

This Civil War helped convince the West European ruling class to follow the U.S. into a continent-wide military organization of the capitalist class.

A security umbrella for capitalism

NATO was understood as a security umbrella of Western European imperialist countries. It had, from its founding, a consolidated command structure, with the U.S. military on top.

The pre-World War II industrial capacity of much of the world was in ruins.  Military security was the essential glue in Western Europe, binding the economic and political dominance of capitalist rule.

For decades NATO and the CIA operated throughout Western Europe, in tandem with the U.S. State Department, disrupting communist-led unions, financing interventions in elections and even using terror attacks against communists and socialist organizations and against the masses.

Operation Gladio was the codename for this ruthless capitalist subversion in Italy, some of which was revealed by Christian Democrat Prime Minister Giulio Andreotti in October 1990.

The second event in 1949 that consolidated the NATO military alliance was the Soviet Union’s detonation of an atomic bomb on Aug. 29, years ahead of what U.S. intelligence predicted. President Harry Truman immediately called for a re-evaluation of U.S. policies, as the U.S. could no longer simply threaten to wipe out Soviet cities without consequences.

NATO absorbed Greece and Turkey in 1952. Turkey’s membership in NATO meant that NATO had military control of the Bosporus Straits – the essential navigational waterway from the Mediterranean Sea into the Black Sea – a choke point for the Soviet ports of Odessa and Sevastopol.

It was only after West Germany’s acceptance into NATO that the Soviet Union and the Eastern European countries formed the Warsaw Pact in 1955 in self-defense. The Soviet leaders saw West Germany’s military and industrial leaders as a continuation of the ruling class that backed the Nazis.

Today there are 100,000 U.S. troops in Europe. They are 1/35 of the 3.5 million NATO military force, among its 30 members, with another 2 million reservists and paramilitary forces. But U.S. officers still command this alliance – the largest military force in the world under a single command.

NATO has a permanent, integrated military command structure, composed of both military and civilian personnel from all member states. These forces are trained to follow a strict command structure, use the same equipment and deploy to whatever battlefront the U.S. commanders order them to, including Iraq, and Afghanistan. Each country is forced to pay for the maintenance of their own forces.  (shape.nato.int)

The Cold War was a relentless war of military expenditures calculated to bankrupt the Soviet Union, which had less wealth and which did not exploit subject nations in the Global South.

According to a NATO report, “The Soviet Union was spending three times as much as the United States on defense with an economy that was one-third the size.”  (nato.int)  This policy of expanding military costs was enormously profitable to U.S. military industries.

The Soviet Union had to match each U.S./NATO escalation. The 1980 U.S. strategy to deploy nuclear-capable Pershing II and ground-launched cruise missiles in Western Europe aimed at bankrupting the Soviets.

Concessions, enacted with great U.S. and Western applause by Mikhail Gorbachev, who became the Soviet leader in 1985, led to the complete unraveling and dismemberment of the Soviet Union by 1991.

Instead of the Cold War’s end ushering in the promised era of peace and stability, U.S. imperialism, now dominant, opened a new era of endless war and colonial reconquest. The targets were in Eastern Europe and a collapsed Russia, and in the energy-rich southwestern Asia and North Africa.

The Federal Republic of Germany annexed the German Democratic Republic in 1990 and both populations were absorbed into the NATO Alliance. A new era of open capitalist markets meant that major western corporations seized control of socially owned industries and resources in Eastern Europe and Russia.

Any country resisting complete takeover was targeted. Iraq in 1991 and then Yugoslavia in 1995 and 1999 were early victims of colonial style reconquest.

The corporate media bragged about the level of destruction of these modern, developed countries that had high levels of education, health care and infrastructure. But since they were countries that had no weapons capable of matching U.S. bombers they were destroyed with impunity. They were to serve as an example to others.

What was in store for the world was discussed at the highest levels of the U.S. establishment.

In a 1992 article in Workers World newspaper, then WWP chairperson Sam Marcy wrote: “On March 8,1992, the New York Times published excerpts from a 46-page secret Pentagon draft document, (written by Paul D. Wolfowitz), that it said was leaked by Pentagon officials. This document is truly extraordinary.

“It asserts complete U.S. world domination in both political and military terms, and threatens any other countries that even ‘aspire’ to a greater role. In other words, the U.S. is to be the sole and exclusive superpower on the face of the planet. It is to exercise its power not only in Europe, Asia, the Middle East and Latin America, but also on the territory of the former Soviet Union….

“‘Our first objective,’ it states, ‘is to prevent the re-emergence of a new rival, either on the territory of the former Soviet Union or elsewhere, that poses a threat on the order of that posed formerly by the Soviet Union. It is of fundamental importance to preserve NATO as the primary instrument of Western defense and security, as well as the channel for U.S. influence and participation in European security affairs.’

“But then it adds: ‘While the United States supports the goal of European integration, we must seek to prevent the emergence of European-only security arrangements which would undermine NATO, particularly the alliance’s integrated command structure.’ The latter, of course, is led by the U.S.” https://www.workers.org/marcy/cd/sam92/1992html/s920319.htm

April 4 is a day to remember not only the founding of NATO but the famous condemnation of the Vietnam War made by Dr. Martin Luther King Jr. on April 4, 1967: “The greatest purveyor of violence in the world is my own government. I cannot be silent.”

NATO is the greatest purveyor of violence and we cannot be silent.