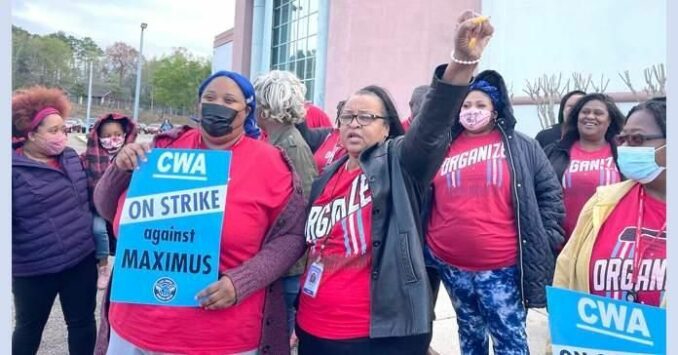 Maximus workers organizing with CWA on strike for justice.

The call centers are in “right-to-work” states, where workers legally cannot be required through a union contract clause to join or pay dues or representation fees to a union.

Maximus has around 10,000 workers at 11 call centers in nine states. For 2021 the company reported profits of $4.25 billion — an increase of 22.8% over the previous year. Last year Maximus CEO and President Bruce L. Caswell received over $7.9 million in total compensation.

If you have recently called 800-Medicare or an Affordable Care Act (ACA) marketplace line, the person answering your call was probably not a federal employee but a Maximus worker. Around 80% of federal government call center work is contracted out to nonunion private corporations that do not have to abide by federal standards for pay and benefits.

Call Center Workers United led the walkout — the first in company history — on the 12th anniversary of the passage of the ACA. While not a recognized union, CCWU has engaged in organizing efforts with Communications Workers of America (CWA). While previous efforts to unionize Maximus workers have fizzled, CCWU hopes to win recognition to bargain with Maximus.

As a way to participate in the strike action, several workers held a virtual town hall, hosted by CWA local 3509, discussing the company’s practices and steps needed to win justice and fairness for its workforce. (tinyurl.com/392h86d6)

Sheree Collier, 59, who has worked for the company since 2017, makes the same per hour wage as new hires. Speaking at the virtual town hall, Collier, who works at the Hattiesburg facility, stated “While security guards average $55,000 per year, call center workers average $35,000. Maximus recently sent out an email that ‘as incentive’ they would continue to pay $15 per hour [a recent bump up from the average $11.25].

“What Maximus has done is manipulate workers to think they are doing us a favor. But President [Joe] Biden recently announced an executive order that requires all federal contractors to pay their workers at least $15 per hour. We are not asking for anything for free.” Collier said.

Employee co-pays for health care insurance deductibles are another key issue. Worker pressure forced Maximus to drop the individual employee’s deductible of $4,500 to $2,500, still $831 more than the national average of $1,669 for single coverage.

Maximus workers perform essential services that we all benefit from. “As long as I do my job, [Maximus] should pay me for what I’m worth. We don’t want Maximus to silence us any longer. We have a right to organize a union,” Collier said. She led the group in chants: “More dignity, more respect — more money in our checks.”