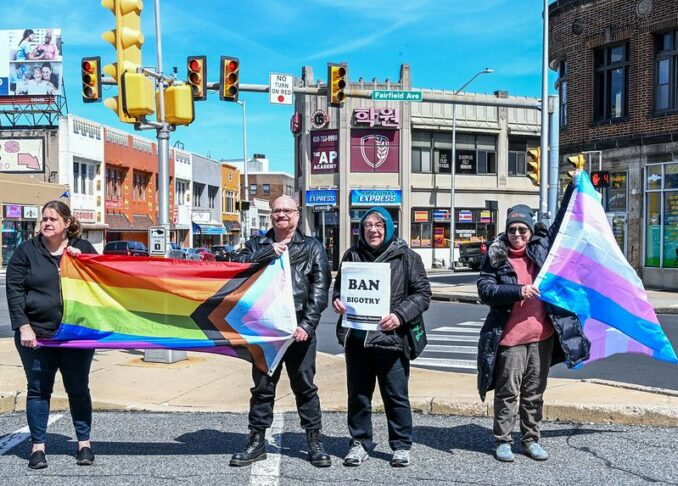 U.D.T.J. arranged to have the transgender flag raised on the flagpole atop City Hall. Members of Philadelphia Workers Solidarity Network turned out to support the event with signs protesting transphobia, racism and other forms of bigotry.

U.D.T.J. organizer Kyle McIntyre, who organized the first George Floyd protests in Upper Darby in 2020, chaired the rally and led the group in chants including “Transwomen are women,” and “Trans rights are human rights!”

Upper Darby is a large, very diverse suburb west of Philadelphia. The event was held in a plaza sandwiched between two major streets, and there was steady car traffic, with some drivers honking in support.

In the first months of 2022, over 151 pieces of anti-LGBTQ+ measures were introduced in U.S. state legislatures, to make a total of over 300 measures currently being considered. Attacks on young trans people were particularly aggressive and hateful.

A weekly ACLU update on this reactionary trend notes: “These measures target transgender and nonbinary people for discrimination, such as by barring or criminalizing health care for trans youth, barring access to the use of appropriate facilities like restrooms, restricting trans students’ ability to fully participate in school and sports, allowing religiously-motivated discrimination against trans people or making it more difficult for them to get identification documents with their name and gender.” (Anti-LGBTQ Bills, aclu.org)

The Idaho House of Representatives passed a bill March 8 to criminalize gender-affirming medical procedures for transgender youth. If the bill becomes law, anyone “convicted” of helping a child travel across state lines to access such health care could be sentenced to life in prison.

On March 23, Florida’s Gov. Ron DeSantis signed into law the infamous “Don’t Say Gay” bill that allows parents to sue teachers and school systems in the state who provide a curriculum including LGBTQ+ sexuality and gender issues. 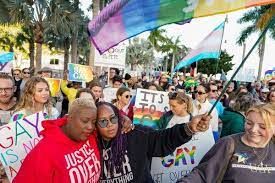 Pushback to these bigoted bills has been energetic and widespread. Young people in Florida arranged militant walkouts from their schools to protest the “Don’t Say Gay” bill. (See ‘Save our children’ — from bigotry and hatred!” Workers World, March 16).

Trans lawyer Sydney Duncan in Alabama states emphatically that the boilerplate anti-trans bills, promoted for political gain, will ultimately be struck down because there is no evidence for the state-specific legislative claims that trans people or trans issues cause harm.

Instead, Duncan says, “In each case, [there] is a groundswell of support for trans people. Corporations and universities have been cowardly; but in every state, allies and parents and doctors and trans kids have stepped up, with a wave of folks who do care, standing behind them. The [bigots] are loud, but they are small. We are many, and we are right.” (Twitter @sydneyvduncan, March 9)