The author is editor of the Portuguese web magazine, jornalmudardevida.net. Translation: John Catalinotto.

The G7 is united. The rest of the world is trying to avoid being towed behind them.

A key element of the West’s propaganda war against Russia is the argument that what is at stake is a confrontation between Democracy and Autocracy. The argument, extending beyond the Ukraine conflict, includes China and tries to convince people that there is a conspiracy of dictatorships and autocracies around the world with the goal of undermining and overthrowing Western democratic regimes.

This supposed battle for democracy and freedom is a facade covering up what has happened in Ukraine and what is happening there now. At the same time, it is an inversion of the facts of the last 30 years: In reality, it was the Western powers — invoking a moral superiority that no one else recognizes — that carried out aggressions all over the world, violating the sovereign rights of nations, trampling on the freedom of others and flouting what they call international law.

An evil that comes from within

It is clear that the aim of this propaganda is to mobilize public opinion in the Western world. To do this, it hides the concrete origins of the Ukrainian conflict and the role played by the enlargement of NATO, obscures Washington’s expansionist policy and masks the hitherto unquestioned domination by the imperialist powers over the rest of the world.

Also clear is the Western rulers’ aim to obtain, from the European and U.S. populations, a carte blanche for all the actions to stimulate war that they promote under the pretext of defending freedom and democracy — or, as the crudest propagandists put it, “our way of life.”

In some ways, this insistence reveals how weak the democratic cement of the West is. What undermines Western democratic regimes are not attacks from outside. It is instead the material decay, the deepening social divide, the rotting institutions, the emptying of democratic life that strikes them from within. The examples are clear for all to see.

The end of progress

Today’s Western democracies were established in a small number of developed countries and in a historically recent period of time. They were founded on continuous economic growth (itself based on the exploitation of other peoples) that allowed their ruling classes to buy the silence and accommodation of the middle classes and to stifle the complaints of the most exploited popular classes.

The crisis resulting from this growth — that is, the economic stagnation in place since 2008 — is the first factor that undermines the political foundations of the governments and thus leads to the regimes’ growing inability to respond to the demands for social progress and to their tendency to impose ever greater restrictions on public freedoms.

The rebirth of fascism 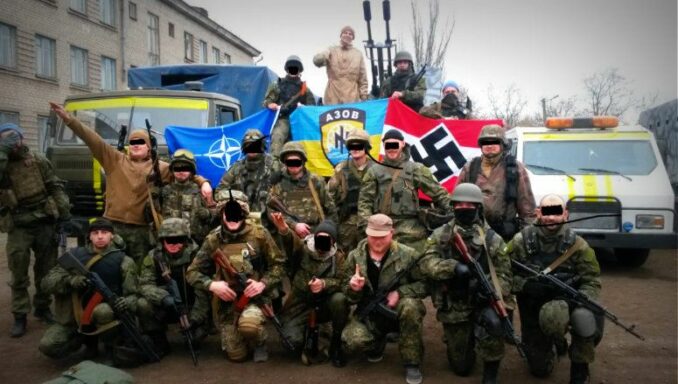 The Azov Battalion’s commander himself confirmed that as many as 20 per cent of his soldiers are, in fact, dedicated Nazis. Here in Ukraine.

The growth of right-wing extremist forces, from Europe to the U.S., is a consequence of the social crisis that has taken hold in the capitalist West and a sample of how democratic institutions fail to protect the working classes (both native-born and even less so immigrant) from the onslaughts of fascism. On the contrary, they support these forces and even see in them a weapon of last resort for the defense of the power of the dominant classes.

The tolerance with which the European Union regards the semi-dictatorships implanted in member states, such as Hungary or Poland, shows how permeable the border is between the so-called “liberal” democracies and the so-called “illiberal democracies.” This latter term is what the thinking leaders of the EU had to use in order to be able to include in the same political union one thing and its opposite.

Donald Trump’s rise to the presidency of the most powerful and developed country in the world, which boasts the most elaborate democracy on the planet, cannot be seen as a mere extravagant episode but as a latent trend in all imperialist countries. The replacement of Trump by President Joe Biden, presented as his opposite, shows the rest of the world more continuity than rupture, and in many ways even an accentuation of U.S. aggressiveness.

What freedom and what democracy?

The peoples of the West have become so accustomed to judging their freedom and democratic regimes by the ritual of elections that they no longer ask themselves if they have any real democracy and enjoy any real freedom.

They only know that their personal and collective needs are increasingly eroded, that the politicians elected to govern always represent the same ruling forces and that democratic power is ultimately the monopoly of an all-powerful bourgeoisie that will not relinquish its privileges.

And they know that economic development (or the lack of it) leads to greater social inequalities from year to year. For this very reason, a huge percentage of citizens turn their backs on elections, seeing in them no chance to express their will.

What democratic legitimacy can an elected power arrogate to itself under these conditions, other than the “legitimacy” that results from the power it holds?

The manipulation of public opinion by democratic regimes does not always make use of the crude repressive methods of a dictatorship, but it is certainly more effective in collectively conditioning mentalities.

This was proven in the 2016 U.S. elections and in the Brexit referendum that same year, with the intervention of experts in the manipulation of public opinion, making use of personal data provided by social networks, namely Facebook.

The idea of the voter’s free choice, in the secrecy of the ballot box, has never had much contact with reality, given the inequalities that condition the options of each voter and the narrow alternatives that are placed before them. But with such sophisticated interventions of “modern life,” a new era in the technique of shaping public opinion has surely been inaugurated. It provides everything but the individual freedom that so-called liberal democracy wields as its emblem.

Neither law nor justice, only force

Whenever they face serious resistance to their interests, the ruling classes in Western democracies do not fight it out based on law or justice — they try to crush it with all the economic, political and military force they possess.

Invasions of sovereign countries, coups d’état, deadly economic sanctions, illegal prison systems like the U.S.’s in Guantánamo, legalization of torture, persecution of those who dare to denounce state crimes, like Julian Assange, and exceptional laws under the pretext of fighting terrorism are weapons that such democracies do not hesitate to use to impose their will.

The natural revulsion at these methods brings with it, on the part of the affected populations, a rejection of those particular democracies, their leaders, and in many cases even their peoples, who are seen as accomplices to the barbarities committed by the leaders they have elected or accepted.

The proof of the facts

How can North American or European democracies be an attraction to people in the rest of the world, if they only serve to ensure that the voters of the U.S. or Europe periodically approve a permanent policy of subjugation of peoples and countries?

For the populations of the rest of the world, this evidence counts for more in the rejection of the West and its preached moral and political values than the accusations about the “imperial” ambitions of Vladimir Putin or Xi Jinping.

The West — which basically created the conditions for the outbreak of the war and is doing its utmost to prolong it at the expense of the Ukrainians — wants to give an idealistic slant to the conflict: democrats versus autocrats, civilization versus barbarism, good people versus criminals. This attempt to give ideological cover to its own actions is intended to hide the interests at play in the conflict.

Military aid to the Ukrainian regime does not aim to defend any of these values. By avoiding a direct entry into the war, the U.S. and the EU have taken a defensive military stance, leaving it up to them to try to get the Russian Federation into a quagmire and wear it down as much as possible. In this sense, the conflict is, on the part of the U.S. and the cowed Europeans, yet another proxy war, now no longer in faraway places, but on European soil and with the Ukrainians as cannon fodder.

It is true that the Russian invasion was condemned by a large majority in the U.N. General Assembly. But to see this as a victory of the “free world” against “tyranny” would require too much optimism on the part of the West. In fact, this formal condemnation cannot be seen separately from another fact: Countries representing the overwhelming majority of the world’s population refused to go along with the sanctions against Russia decreed by the Americans and Europeans. This means that formal condemnation is not matched by the practical condemnation sought by the U.S. and the EU.

If the values preached by Western democracies were at stake in Ukraine and were seen by the rest of the world as universal values, certainly the countries of the so-called Global South would react differently. Yet more than half of the world did not support sanctions, because it saw no reason in principle or interest in siding with the U.S. and the EU.

This more-than-half world, in its diversity, realizes the essence of the matter: The hitherto irresistible power of the imperialist powers is being called into question, as much by China’s economic enormity as by Russia’s military capacity and political decisiveness. And it is on this turning of the page that the majority of the peoples of the world tended to bet.