Teachers across the country are still reeling from the topsy-turvy pandemic world of virtual classrooms, COVID-19 outbreaks and mask naysayers. It’s no wonder these essential workers are giving out failing grades to school administrators and the lack of coherent policies to protect students and teachers. Minneapolis teachers just ended a 13-day strike after winning “major gains . . . on pay for education support professionals, protections for educators of color, class-size caps and mental health supports,” according to the Minneapolis Federation of Teachers. The union is expected to vote on the contract in the very near future. 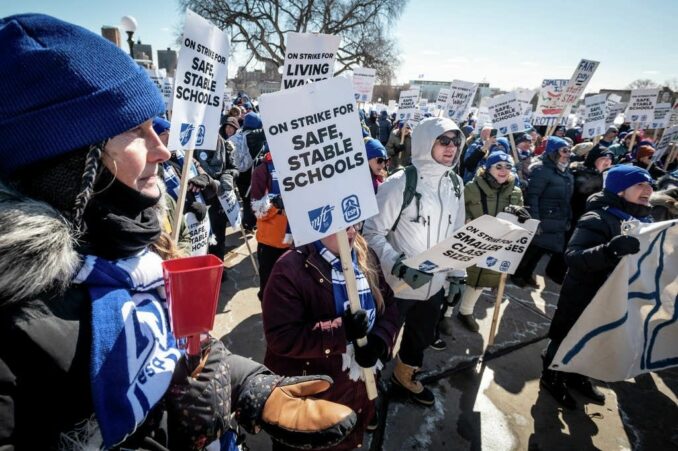 Thousands of school teachers and support staff rallied at the Minnesota State Capitol on the second day of the Minneapolis strike, March 9.

Sacramento City Teachers Association and support staff began a strike just as the strike in Minneapolis ended. Low staffing seems to be the primary grievance, as a sixth-grade teacher on the picket line asserted: “Jobs are posted but they stay posted. [Administrators] are not following through to get those people interested in being teachers in our classroom or support staff in our classroom. We need that. Our students need that.” (CBS Sacramento, March 24)

Coffee shops are waking up the labor movement

Salute to all those baristas out there who are giving a caffeine-infused jolt to the U.S. labor movement. The Starbucks union drive started in Buffalo, New York, with the first union vote win in December 2021. Since then, over 150 Starbucks across the country have begun or won union organizing campaigns. OTPL reported recently on the drive at the five Pittsburgh Union Coffee Tree Roasters shops. There are still more small coffee shops jumping into the worker-led movement to gain bargaining rights and a voice determining workplace conditions.

Baristas at Colectivo Coffee at 15 locations in Chicago and Wisconsin just won a NLRB decision, when the Milwaukee-based company attempted to challenge the union vote. The majority of the 400 employees, including workers in the production and shipping facilities, voted for representation by the International Brotherhood of Electrical Workers (IBEW). After the NLRB decision, the corporation folded with this statement: “We have decided not to continue our legal appeal and will commence to prepare to bargain in good faith with the union.” (Wisconsin Examiner, March 25)

Finally, let’s support the baristas and cooks at Great Lakes Coffee Roasters in midtown Detroit, who began a strike in February after the company ignored worker complaints, including safety issues following a COVID-19 outbreak that infected 20 out of 24 employees. Calling themselves “Comrades in Coffee,” the workers organized with UNITE HERE Local 24. The strike demands that management recognize the workers’ union affiliation and their bargaining rights as union members. Great Lakes Coffee Roasters workers are demanding a fair wage and benefits, proper safety measures and sick time to protect workers, stable working schedules and a “seat at the table” to better communicate with management.

Workers at Chicago TV station WTTW went on strike March 16. IBEW Local 1220 represents around two dozen workers at the station, including technicians, graphic artists and floor crew members. The workers have filed multiple grievances over the past four years against management’s attempts to hire nonunion labor. Arbitration through the NLRB resulted in decisions that favor the union, but the tone-deaf bosses refused to listen.

Maximus call center workers chose March 23, the anniversary of the Affordable Care Act, to walk off the job. Communications Workers of America was involved in organizing the strike. Maximus employs around 10,000 people who work at 11 federal Medicare and ACA call centers in nine states. The irony is that these workers are fighting for a living wage and health benefits.