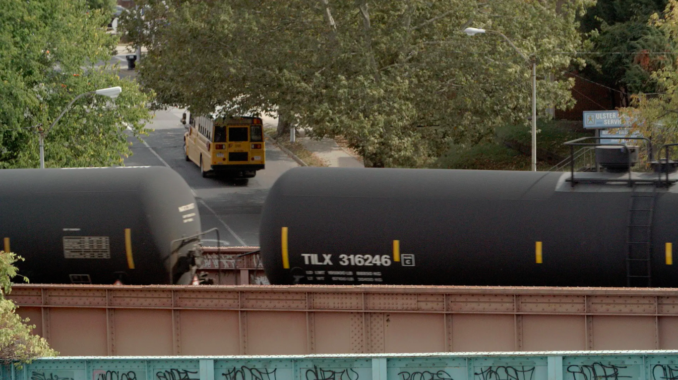 Is the U.S./NATO-instigated war with Russia, taking place on the battlefield of Ukraine, yet another “war for oil” — or a war over control of global sales of natural gas?

At an emergency NATO summit in Brussels March 25, President Joe Biden announced the U.S. will accelerate liquified natural gas (LNG) exports to Europe, sending an additional 15 billion cubic meters (bcm) of LNG shipments on seagoing tankers in 2022, on top of 2021 exports of 22 bcm. Biden said U.S. exports of LNG will continue to grow through 2030, averaging 50 bcm to Europe annually.

Before Biden’s NATO address, the U.S. Department of Energy issued two long-term orders March 16 giving Cheniere Energy projects in Louisiana and Texas “additional flexibility to export the equivalent of 0.72 bcm of LNG per day” to “any country with which the U.S. does not have a free trade agreement, including all of Europe.” Despite the fact that U.S. LNG exporters were already at or near maximum capacity, the DOE approval allows every U.S. LNG project to export to any country not under U.S. sanctions.

Fracking and the 2014 Ukraine coup d’etat

In 2014, the U.S. financed and armed a right-wing coup in Ukraine. Even before that, the U.S. was promoting exports of U.S. liquified natural gas to Europe as the way to wean the EU from its dependency on Russian gas imports. The U.S. moved to secure global markets for its more expensive and more environmentally hazardous fracked gas, even before infrastructure was fully in place to accommodate this trade.

For years, with limited success, the U.S. energy industry pressured Ukraine and other European countries to open up for fracking. With domestic overproduction of fracked gas, and U.S. earnings around $3 per mmBtu (million British thermal unit), the industry was eager to export LNG to markets with higher rates of return. In 2013, natural gas in Europe sold from $11 to $13 per mmBtu and in Southeast Asia $18 per mmBtu or higher. (tinyurl.com/mrxn3m4b)

Energy industry public relations firms pushed the message that people in the U.S. had to accept the environmental risks stemming from fracking in order for the U.S. to achieve “energy independence.” Yet in April 2014, following the February Ukraine coup, two bills were introduced in the U.S. Congress seeking to fast-track U.S. LNG exports to Europe.

In 2011, Russia and Germany cooperated to begin construction of a large, direct, natural gas pipeline from Russia’s northwestern border to Germany. The Nord Stream 2 pipeline would have cemented growing economic relations between Russia and Germany, both U.S. economic competitors.

Completed in September 2021, the Nord Stream 2 pipeline was scheduled to open in early 2022. In late 2021, the U.S. began ramping up pressure on Ukraine to join NATO, simultaneously issuing daily announcements about Russian plans to invade Ukraine. By imposing the most extreme economic sanctions against Russia and demanding compliance from EU nations including Germany, the U.S. successfully blocked the Nord Stream 2 opening, further compelling Russia’s defensive war.

In calling for increased LNG exports to Europe, the Biden administration abandoned any pretense of enacting major climate legislation. Bowing to energy industry pressure, it issued a “fact sheet” promoting expanding LNG exports to the EU, claiming this is “not in conflict with the net-zero climate goals that we’re shooting for” and that LNG is a “catalyst” for doubling down on investments in clean energy.

Biden’s March 25 pronouncement was met with immediate concerns from global climate activists, who see it as a serious setback for efforts to phase out fossil fuel usage to limit global warming. Miles Jones, managing director of policy at Food & Water Watch called on Biden to “firmly reject any plans to fast-track gas export terminals here in the U.S. Corporate polluters are brazenly seizing on this crisis to secure decades of dependence on dirty energy, which will further devastate frontline communities and abandon any hopes for bold climate action.”

Liquified natural gas production generates higher levels of carbon emissions than any other energy source, except for coal. While Russian gas would have been sent through the already constructed Nord Stream 2 pipeline, U.S. LNG shipments will require the construction of new gas terminals and pipelines. These fossil fuel infrastructure projects will take years to build and would be used for a long time.

Somini Sengupta, Global Climate Correspondent for the NY Times, wrote: “U.S. gas export buyers are under long-term contracts. Export terminals are already shipping out all the gas they can. Not all EU countries have import terminals to take in more LNG. If they had to build more, it could lock in reliance on gas for 10-15 years.” (March 25, 2022)

Promoting LNG exports would leave Europe more dependent on U.S. energy, while prolonging global reliance on a fossil fuel sourced by hydraulic fracturing or “fracking.” Fracking releases toxic and carcinogenic chemicals into the environment, wastes millions of gallons of vital water resources and contaminates air and water in communities adjacent to fracked wells. Serious health issues and deaths have been linked to exposure to fracking chemicals and waste products.

When natural gas in any form is burned for energy, it releases carbon into the atmosphere, contributing to climate change. But environmental activists see LNG as especially problematic for the climate.

“In every step of its life cycle — from extraction to processing to storage to transportation — LNG emits methane,” said Marisa Guerrero with the Natural Resources Defense Council (NRDC) which found methane (CH4) 84 times more potent than carbon dioxide (CO2) in the first 20 years after emissions.

LNG must be chilled to temperatures of minus 259 F and held to that extreme temperature throughout its entire transport — whether by ship, rail or truck — a very energy-intensive process. Warming it back to normal temperature requires yet more energy. All told, LNG is responsible for nearly twice the greenhouse gas emissions as ordinary natural gas.

A Feb. 4 study by Duke University detected hundreds of very large and previously unreported methane leaks, released at oil and natural gas production sites around the world. In 2021 Duke’s Drew Shindell, writing for a United Nations climate report, found that reducing methane emissions was the most cost-effective way to slow global warming. (tinyurl.com/y2ydydjt)

Risks to communities of color

Fossil fuel facilities, including those built to process and ship LNG, are disproportionately located near low-income neighborhoods and in communities of color. They range from locations in the Delaware River Basin in New Jersey and Maryland to Gulf Coast cities in Louisiana and Texas, where the majority of LNG ports were built with little regard for local communities’ safety and well-being. The NRDC found: “Fourteen percent of the climate footprint of LNG comes from gas leaks, flaring or intentional venting during production and transport.”

These export terminals handle large quantities of other fuels even more volatile than LNG. With the large quantity of gas stored in just one LNG tank, any breach by fire would become an unimaginable catastrophe.

LNG transport to and from export terminals is risky. The Trump administration allowed highly explosive LNG to be moved by rail. Trains with up to 100 specialized cars carrying LNG move through major metropolitan areas on a daily basis, endangering millions of people along the routes. The Pipeline and Hazardous Materials Safety Administration has delayed reversing Trump’s policy and has yet to permanently ban LNG “bomb trains.” The more the Biden administration promotes LNG exports, the less likely the ban will happen.

However, sabotaging Russian gas exports to Germany was never the U.S. endgame. Ultimately controlling Russia’s vast natural resources is the goal. U.S. strategists, war planners, corporate media and politicians created a situation where the people of Ukraine were put in harm’s way to serve the interests of Pentagon-armed corporate warmongers. Ukraine’s sovereignty was never the main issue.

For decades, fracking has put U.S. workers and communities in harm’s way. Expanding LNG exports, on top of the war, makes matters worse for everyone.