Hundreds of people demonstrated at the Idaho State Capitol against anti-abortion Senate Bill 1309 on March 19 in Boise. Freeing Idaho, a community-based reproductive rights coalition, organized the action and is determined to continue to fight this attack. 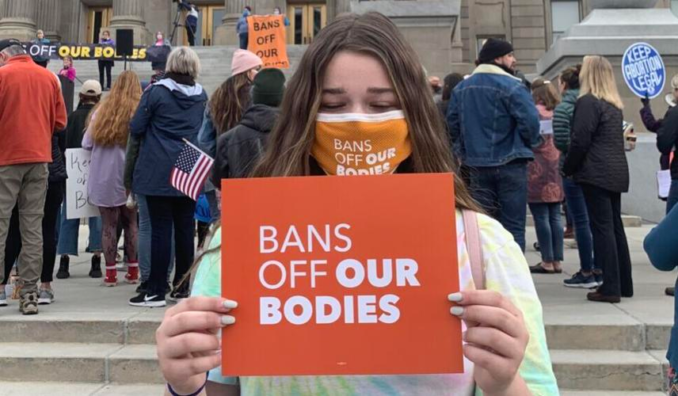 Both houses of the state legislature have passed the legislation. Although the protesters pressured Gov. Brad Little to refuse to sign this awful bill, he signed it anyway on March 23, in violation of fundamental human rights to bodily autonomy and decision-making on medical matters.

Like Texas Senate Bill 8, this law bans abortions after the sixth week of pregnancy, before most people know they are pregnant. It is the first state law to copy the Texas bill implemented Sept. 1, 2021. Texas now bans all abortions after state officials’ declared deadline, with no exceptions for rape or incest victims, even children.

However, Idaho’s law would allow later abortions for rape or incest victims, but only if the abortion seekers provide a police report to prove their eligibility to obtain the procedure! Only one-third of rapes are reported.

The Texas and Idaho laws are similar in that they turn over legal authority for enforcing these bans to members of the public, not state or city officials or courts.

In Texas, anyone can sue an abortion provider, clinic, doctor or staff member for $10,000, which is legally similar to a “bounty hunter” scheme.

The abhorrent, inhumane Idaho law allows anyone “related” to the fetus, “including a rapist’s family members, the right to sue health care workers and doctors for performing an abortion and allotting $20,000 for each successful lawsuit.” (KTVB7, March 19)

Missouri’s proposed House Bill 2810 calls for a 10-week abortion ban with no exceptions, even for ectopic pregnancies, which are life-threatening if untreated. A seller or user of abortion drugs or devices could be incarcerated for 15 years. A medical professional who performs an emergency abortion on a patient with an ectopic pregnancy could face a 30-year imprisonment; so would the patient.

Proposed bills in Ohio and Tennessee would ban all abortions, including in cases of rape and incest. The states would award $10,000 to winners of lawsuits against doctors, abortion patients and anyone who helps someone obtain an abortion.

Reproductive rights advocates decry the terrible problems brought on by the repressive Texas law and are concerned about the millions of people around the country who would be affected by such archaic laws and outright abortion bans. The impact would be strongly intensified if the U.S. Supreme Court overturns its 1973 decision in Roe v. Wade, which legalized access to abortion.

The Texas ban has been a nightmare for pregnant people who have traveled hundreds or thousands of miles out-of-state to obtain abortions. It is particularly harmful for low-income individuals and those who are Black, Latinx, Indigenous, women, migrants, disabled, youth, rural residents and members of the LGBTQ+ community. Abortion seekers have to take time off from work, find childcare and transportation and raise funds. While a number can obtain medication abortions, some have no options.

Anti-abortion politicians and other reactionary forces are determined to overturn reproductive rights any way they can, through legislative action, court rulings and even violence. At the root of the zealous right-wing campaign against reproductive rights are racism, misogyny and class oppression.

The attacks on this fundamental human and medical right expose the U.S. health care system’s inequities and racial injustice. All of the prohibitions, restrictions, obstacles and abortion bans fall the hardest on oppressed people and those already discriminated against in the health care system.

We say fight back!

Millions of people across the country who will be impacted by these attacks are awaiting the Supreme Court ruling in June in the Dobbs v. Jackson Women’s Health Organization case. The justices could overturn the right to access abortions, upending the top court’s approval 49 years ago, or they could further limit access to the procedure.

Democratic Party officials, including those in the White House, say they will oppose the abortion bans. But they can’t be counted on to protect this right.

It was the power of the people through a mass movement that won legalization of abortion in 1973, despite a majority Republican-appointed Supreme Court. It was the historic Civil Rights Movement that won the Civil Rights and Voting Rights Acts. The LGBTQ+ movement won the Marriage Equality Act. The working class and labor unions have won workers’ rights, not the politicians.

From now until June, every person in every progressive organization and in every community should join in a united movement and loudly protest and demand their right to reproductive justice. And if there is a setback, then we have to redouble our efforts to beat back the right-wing attacks and adamantly fight for our rights.