Students from three Oakland area schools, scheduled to be closed at the end of this school year, led a spirited march and rally today. Young people from Parker Elementary, La Escuelita Middle School and Community Day School chanted from the sound truck, carried signs and banners and spoke about how teachers in their neighborhood schools have changed their lives. Rank-and-file members of the Oakland Education Association, parents and community members participated in today’s action. 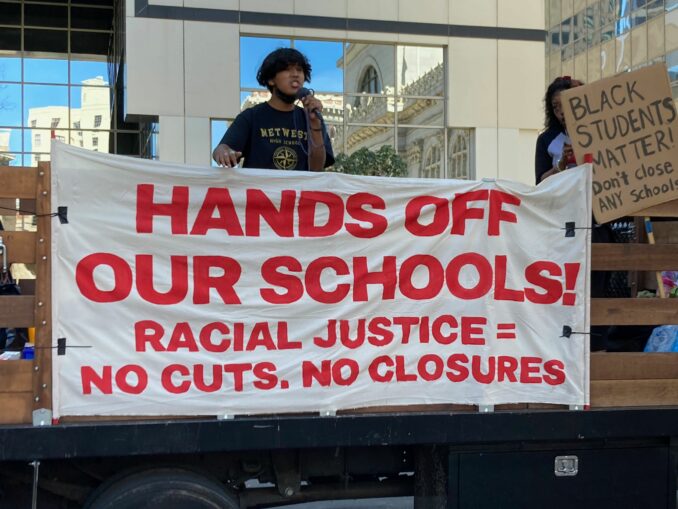 Fernando, a former student who graduated from La Escuelita, talks about how important this school is to his community, Oakland, California, March 26.  WW Photo: Judy Greenspan

Since February, a grassroots community-led coalition has come together to stop the Oakland Unified School District’s plans to close or merge 11 public schools serving primarily Black, Latinx and other students of color in East Oakland. A multifaceted resistance has come together involving direct actions at school board members’ homes, as school board meetings have gone virtual since the beginning of COVID-19. The coalition has organized town hall meetings at several impacted schools, petition campaigns and street rallies. The response from the Oakland community has been overwhelmingly supportive.

Today’s action started at La Escuelita, a school that houses students from kindergarten to eighth grade. The school board is closing the middle school portion of the school, despite strong parent, student and community opposition.

Azlinah Tambu, a Parker parent, thanked everyone for always showing up to support the protests and the town hall meetings. “We will continue to fight until the last day for all three of these schools that are listed for immediate closure, and we are going to come back next year and fight for all these schools that are on next year’s closure list. Hands off our schools!” Tambu said at the opening rally.

After the rally there was a 2.8-mile march to Oakland City Hall for an ending speak-out at Oscar Grant Plaza. The march snaked its way past Lake Merritt, one of the most popular areas in Oakland, where thousands of people received flyers about the right to stop the school closures. Drivers incessantly honked their horns and proudly displayed the flyers as they drove past.

The OUSD board claims that they don’t have the funding to keep the schools open. However, teachers and community members have done their homework and found out that closing schools does not save money; in fact, it makes it harder for Black, Latinx and other children of color to stay in school. Teachers believe that the move to close the schools will only strengthen the school-to-prison pipeline and lead to the further charterification and gentrification of Oakland.

At City Hall, many of the young people performed spoken word and spoke passionately about the need to keep their schools open. Mike Hutchinson, one of two school board directors that opposes all school closures, invited everyone to come to the first in-person school board meeting since COVID-19 on April 13. The Save Our Schools coalition is planning to bring the voice of the community to this meeting.

Rank-and-file OEA members, International Longshore and Warehouse Union (ILWU) Local 10, SEIU 1021 members, parents and community members are continuing to organize an Oakland coalition against privatization of both the schools and the Port of Oakland. The next meeting of this group is scheduled for Wednesday, March 30, 6 p.m. at Westlake Middle School in Oakland.