Workers at the Amazon warehouse in Bessemer, Alabama, cast final votes March 25 in a second historic attempt to win representation by the Retail, Wholesale and Department Store Union (RWDSU). The workforce at the facility is majority Black and more than half female. 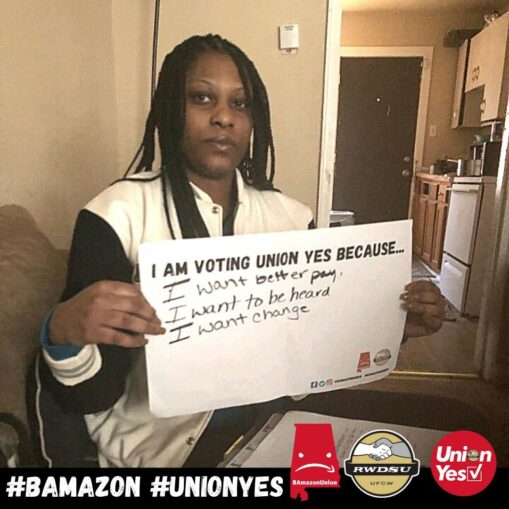 Amazon workers in Bessemer, Alabama, participated in the ‘I am voting yes’ union drive in 2022. Credit: RWDSU

According to RWDSU, around 6,100 workers were eligible to vote in this round, about 350 more than last year. The union estimates that a little more than half the current workforce was employed at the facility during the 2021 election. 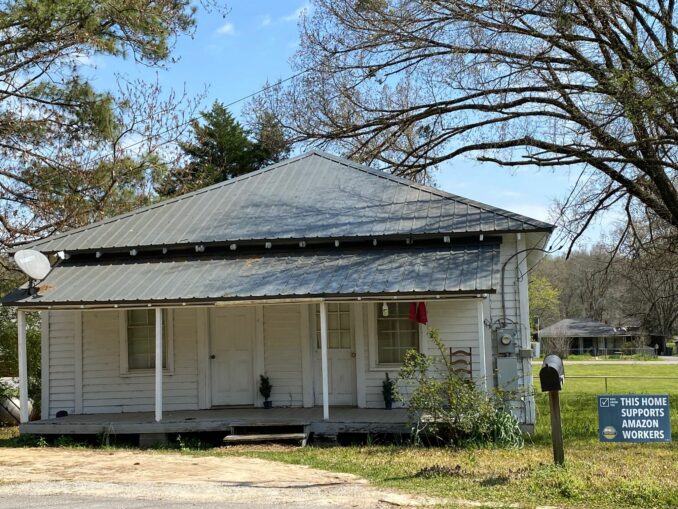 Workers Jennifer Bates and Darryl Richardson, both leaders in the previous union mobilization, say there is more momentum this year.

Richardson notes: “We’ve got more employees involved. They’re doing more speaking out. They realized during the first election that Amazon wasn’t being true in what they promised.” (al.com, Feb. 1)

As for last year’s “no” vote, Bates commented, “How can you say that a majority of the workers voted ‘no,’ yet you’re using all these tactics to prevent us from forming our union?”

Photos and video posted on Twitter during the current campaign showed union supporters interrupting and refuting Amazon management during mandatory worker meetings that pushed anti-union messages. RWDSU ran an inspiring social media campaign that highlighted Bessemer workers holding signs with their handwritten reason why they were voting “yes.” The union was backed by other union and community members who phone-banked and went door to door to win support.

The outcome of the vote is uncertain, due to the huge number of workers to be reached, the high turnover and the fact that the vote is by mail-in ballot. Worker participation rate by mail is usually 20% to 30% lower than in-person voting, according to the NLRB.

The need for unionization at all Amazon facilities is crucial. The Bessemer workers say the grueling conditions in company warehouses are most similar to those faced in meat processing plants: fast, repetitive, heavy assembly-line work, standing in place for long periods with almost no break, frequent injuries and no respect — especially for workers who are Black, Latinx and women or gender-nonconforming.

There is the continuing danger from a management that will always put profits before worker safety. On March 25, a malfunctioning machine at the Bessemer facility sprayed out unidentified vaporized oil that rapidly spread throughout the giant Bessemer warehouse. Workers eventually self-evacuated, with no guidance from managers. Stuart Appelbaum, RWDSU president, issued a March 26 statement that said in part:

“Amazon knowingly kept workers at their stations for hours during the incident, failed to properly evacuate the facility and told workers to go back to work before any clarity on the safety of the vapor in the air was known. It is unconscionable that Amazon would keep workers at their stations when there is a known health and safety issue. Workers’ lives should never be put in jeopardy for profits, something Amazon has an inexcusable history of doing.

“Workers did the right thing leaving when they felt unsafe yesterday and in reporting this to OSHA, who must investigate this fully. Amazon must be held accountable for this. We hope the substance workers were inhaling for hours has no long-term harmful effects, but the simple fact that workers were in that situation demonstrates Amazon’s blatant disregard for the health and safety of their employees.”

Despite Amazon’s might and Alabama’s reactionary “right-to-work-for-less” laws, there is a militant tradition of worker organizing in the state, especially for Black workers, going back to the 19th century. Black Civil Rights actions in Alabama were the starting point in the 20th century of a movement against racism that continues throughout the country today.

Alabama workers fighting for a union at Amazon are the children, grandchildren and great-grandchildren of those movements. They are well aware of how freedoms are won and how working-class history gets made. Whether the official vote is “yes” in Bessemer this time around, there’s no doubt that they will continue to organize for victory.