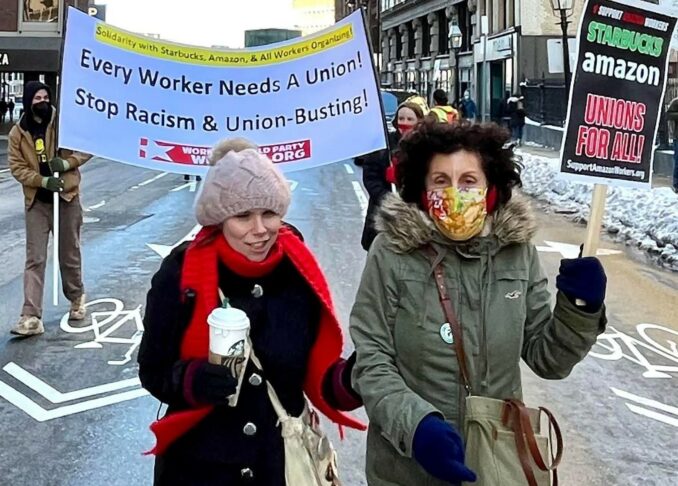 I am a health care worker in the Boston area. At the outset let me express my solidarity and deep admiration for the brave workers of Starbucks and Starbucks Workers United. I heard it was a BREWTIFUL day yesterday, with a third unionized Starbucks store in Mesa, Arizona.

Data shows that workers covered by union contracts, on an average, make 11.2% more than nonunionized workers with similar backgrounds in the same industry.

During the pandemic low-wage workers, especially women and people of color, were forced to work without personal protective equipment and without access to health care. The school bus drivers union and dining hall workers union fought for the health and rights of their workers, and I am proud to be associated with them.

I am from India. You all must have heard about the historic farmers’ struggle for several months, which brought the government to its knees and repealed unjust farm laws. They succeeded because they were organized with several farmers unions and Dalit workers’ unions supporting the struggle.

Dr. Martin Luther King Jr., while speaking to striking sanitation workers in Memphis in 1968, said, “Let it be known everywhere that along with wages and all other securities that you are struggling for, you are also struggling for the right to organize and be recognized.” The seven brave Starbucks workers who were fired for their organizing efforts in Memphis must be rehired.

Workers united will never be defeated. Workers have nothing to lose but their chains. They have a world to win. As we say in India, Starbucks Workers United Zindabad!