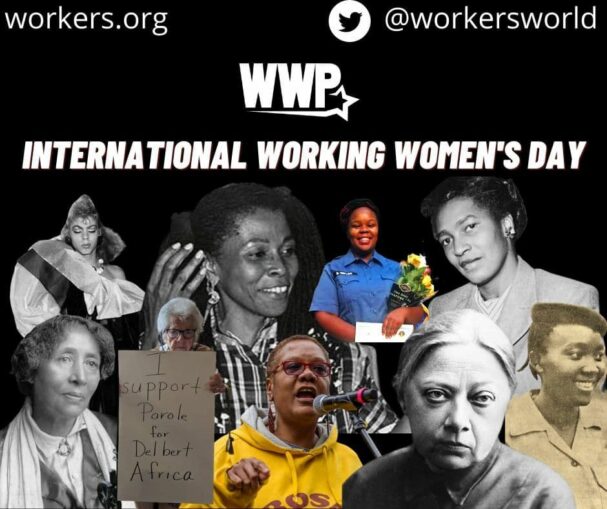 But this newspaper doesn’t show this solidarity only on that date or in March, Women’s History Month, as proclaimed by Congress in 1987. Its pages relate the news and show whose side we’re on weekly: the multinational, multigender working class and those most oppressed by capitalism.

WW promotes the view that “every struggle is a woman’s struggle,” including the fights for affordable housing, jobs at a livable wage, unionization, free medical care for all with full reproductive health services, voting rights, a clean environment and an end to imperialist wars.

We embrace the mothers whose children have been killed by racist police and vigilantes, from Sybrina Fulton, Trayvon Martin’s mother, to Wanda Cooper-Jones, Ahmaud Arbery’s mother.

Our paper decries the superexploitation of African American, Latinx, Indigenous and immigrant women who earn the lowest wages. WW expresses solidarity with these women workers and those subjected to racism, misogyny, bigotry, xenophobia, homophobia and transphobia.

WW coverage supports the Starbucks workers, mostly young women and LGBTQ+ workers, fighting to unionize stores owned by this global corporation. We applaud the Memphis 7, mainly Black and Brown workers, who were fired for daring to organize their Tennessee store.

This newspaper extensively covers the struggles of Amazon workers for safer, better-paying jobs and a union. While the corporation’s centibillionaire owner, Jeff Bezos, got even richer during the pandemic, women still comprise one-half of the lowest-paid workers, while two-thirds of them are Black and Latinx.

Socialists have long recognized the only way to improve women’s lives is the struggle to overturn capitalism. WW newspaper espouses this view and boldly states that socialism is the only system that can ensure real liberation for women, workers and oppressed people.

Since the early 1990s, the fund has helped sponsor the workers.org website. Throughout the pandemic when fewer print issues have been published due to staff health concerns, new articles have been posted daily, and the PDF of the weekly newspaper has been posted at workers.org. Not one online issue has been skipped throughout this two-year health crisis.

For a donation of $60 a year, or $120 or $300, you receive a subscription to WW newspaper and one, two or three free subscriptions for friends, depending on donation, and updates. A free download of the “What Road to Socialism?” book, published in 2020, is available at workers.org/books. Or notify us if you want a paperback book.

Write checks (either monthly or annually) to Workers World and mail them, with your name and address, to Workers World, 147 W. 24th St., 2nd Floor, New York, NY 10011. Put “Supporter Program” in the memo line. Or donate online at workers.org/donate/.

We are grateful for your help in building Workers World!