Thousands of Haitian garment workers, mainly women, have hit the streets in February demanding that the government raise their minimum wage to 1,500 gourdes (about $14) for a 9-hour day. They currently make 500 gourdes (about $4.80) a day. 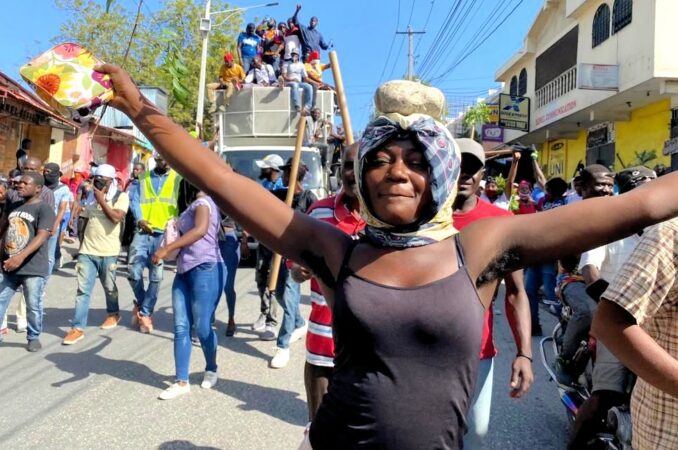 The workers, mostly women who spend over half their salaries on transportation to and from the factories, are demanding a raise. credit: Konbit Journalis

These low wages, and a bourgeoisie more than willing to intensely exploit workers, are what has drawn big companies like Gap, Old Navy, H&M, JCPenney and Zara to hire Haitian companies in duty-free “assembly zones,” which let them produce clothes cheaply with high profits.

A minimum-wage worker in the United States is guaranteed to make $7.25 an hour, which means that they make 50% more in an hour than a Haitian worker makes in a day.

All the Haitian clothing subcontractors, whether they were in Caracol near Ouanaminthe in the northeast, or SONAPI on the airport road in Port-au-Prince, or at other factories scattered about most major Haitian cities, have encountered a series of one-day or three-day walkouts.

On Feb. 21, the interim Prime Minister Ariel Henry responded to this strike wave by announcing that the minimum wages in a number of economic sectors — Haiti has different minimum wages depending on what kind of company you work for — were going to be raised by less than 40%.

The wages for garment workers, the majority of the workers on the street, would still be less than $7.50 a day.

The police, called in by the bosses, responded with clubs, tear gas and bullets. Ayibopost, an online news site, quotes Jephté Bazil, a Haitian journalist, who witnessed a police attack on Feb. 23. According to Bazil, one of the police officers said it is “journalists who are responsible if the demonstrators are still in the streets, since they are handing them their microphone.” 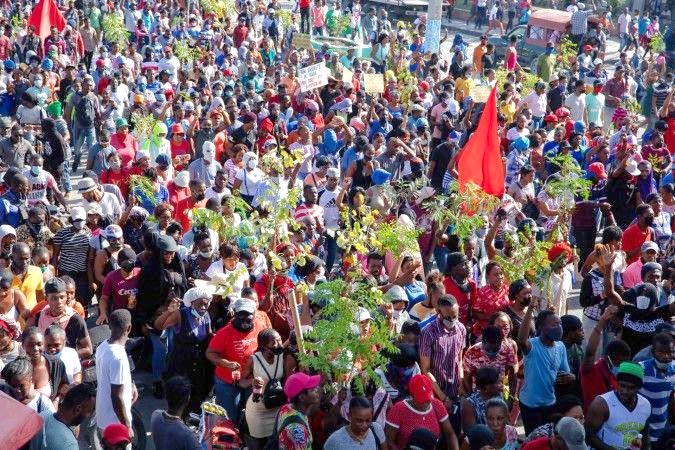 Tear gas and bullets did not stop protests demanding Haiti’s minimum wage increase from the pittance of $5 a day to $14. Credit: Ayibopost

The workers indeed stayed in the streets. Walking out in a country where only 30% of the people have a steady job is risky. The fact that so many women, waving the green branches that indicate they want their current situation uprooted, points to the hungry anger they feel.

Interim Prime Minister Henry’s raise offer wasn’t enough to keep up with Haiti’s high inflation. The workers want and need more. The cost of living, including food, schooling and gasoline, is going up. And rising as well is the fear of what tomorrow will bring — more corruption, kidnappings and assassinations. The government lies. Public funds are wasted. There is institutionalized thievery — deductions for health care, for example, are not turned over to hospitals.

Everything is increasing except wages.

Their low wages are behind the food insecurity that 40% of Haitians face. In 2021, Haiti ranked 104 out of the 107 countries on the Global Hunger Index. According to the World Food Program, 4.4 million Haitians regularly didn’t get enough to eat.

The union coalition 1er Mai-Batay Ouvriye (May 1-Workers Struggle) issued the first call for a workers’ walkout Feb. 9. It is currently suing the prime minister’s office, according to its spokesperson, Télémaque Pierre, to postpone the official establishment of the new minimum wages and to get a list of all the police assigned to control the street protests. They want the rights of those injured by the cops protected. (tinyurl.com/38h9xx8b)

The textile workers in Haiti, mainly women, are taking the first steps in improving their lives. They deserve solidarity.