The global supply chain crisis, fueled by the COVID-19 pandemic, has laid bare systemic problems within global capitalism — when and where goods are produced to how they are transported and the growing disparity between the bosses’ wealth versus the wages and benefits paid to millions of workers throughout this process. 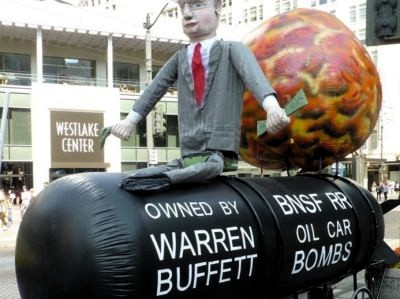 The latest crack in the capitalist infrastructure — rail transport — surfaced when 17,000 conductors and engineers on BNSF railroad called a strike for Feb. 1. Their specific concern was a new attendance policy made effective Feb. 1, penalizing rail workers for missing work for any reason and encouraging sick workers to report for work, regardless of their illness. Throughout the pandemic, the rail industry has shown little regard for workers’ health, but this latest assault took place in the midst of the omicron surge.

BNSF’s policy reduces the number of days workers can take off because of fatigue, from 84 to 22 a year, essentially leaving workers on call 24 hours a day. With 32,500 miles of track in 28 Western states, BNSF is one of the largest railroads in the U.S.

A strike by the Brotherhood of Locomotive Engineers and Trainmen (BLET) and the Transportation Division of the International Association of Sheet Metal, Air, Rail, and Transportation Workers (SMART-TD) was temporarily stymied. A restraining order claimed a strike would violate the Railway Labor Act of 1926, but the struggle is far from over. Contract negotiations covering 115,000 U.S. rail workers at major Class 1 railways — defined as carriers earning revenues over $900 million — are underway this year.

Like millions of “essential workers,” railroad workers suffer from their bosses’ greed, escalated during the COVID-19 pandemic, and their suffering is exacerbated by cost-cutting measures implemented industrywide over the past decade.

Over decades of globalization, many transnational manufacturers developed the “Just-in-Time” system of production, whereby goods were only produced to meet immediate demands in order to reduce inventory storage costs and taxes. This shortsighted measure, designed to boost corporate profits, has wreaked havoc as supply chain barriers are resulting in months-long delays in deliveries of everything from computer chips to cars and appliances.

The railway industry developed their own version of lean production — “Precision Scheduled Railroading.” PSR’s cost-cutting measures, designed to increase profits, include cutting less-profitable routes and closing or consolidating railyards, plus running fewer but longer trains. Rail companies have laid off tens of thousands of workers and escalated speedups for the workers who remain. PSR has led to a higher number of accidents, more of them deadly.

Between December 2015 and December 2021, railroads cut up to 35% of workers on Class 1 railroads — carriers with revenues over $900 million. From 2000 to 2020, there was also a 30% increase in the average tonnage carried by individual freight trains. The impact of these cuts leaves little room for error.

To ship by truck or rail?

Decades of government deregulations converted what were once well-paid, secure truck-driving jobs with union protection into essentially a gig economy. Today most truck drivers are forced to work 70-hour weeks, with no on-the-job protection and wages that average below the federal minimum. Many truckers complain they are treated as indentured servants.

In contrast to trucking, rail remains one of the most heavily unionized workplaces among transport workers in the supply chain. Unionized railroad jobs were once secure through retirement. The cost-cutting frenzy has made these secure jobs unbearable. Railroads have cut back on inspections and outsourced maintenance previously done by union workers. Conductors on ever longer trains have been cut from two to one.

The American Society of Civil Engineers’ 2021 “Report Card for America’s Infrastructure” rated freight trains overall more reliable and cost effective than trucking. With a single railcar able to carry 3-4 trucks worth of cargo, they determined that a single train could take 300 trucks off the road, lessening congestion and reducing deterioration of highways and bridges.

The industry’s Association of American Railroads claims rail transport is more fuel efficient and therefore more “environmentally friendly” than trucking. But is this actually the case?

If one only compares the relative percentage of goods shipped and the cost of shipments, rail transport might look like the better option. Currently rail freight consists of bulk commodities, including grain and automobiles. Over 40% consists of mined ores — shipping 70% of U.S.-produced coal.

Rail companies, which made $10.7 billion hauling coal in 2018, have a long history of partnering with and funding the climate change denial movement. As demand for coal diminished, rail companies increased shipments of other fossil fu

In April 2019, President Donald Trump ordered the Transportation Department to permit liquefied natural gas to be shipped by specialty rail tank cars. In August 2020, 14 states, including Pennsylvania and New Jersey, filed a legal challenge to this federal rule, arguing that the proposed LNG “bomb trains” cut through residential neighborhoods in many cities including Philadelphia.

Trains carrying crude oil derailed in Quebec and North Dakota in 2013, resulting in deadly and destructive explosions. And a 101-car CSX train derailed in Philadelphia in 2014, close to an area with multiple universities and hospitals. Six of the derailed cars carried crude oil. These derailments happened before the massive layoffs of Class 1 freight workers and the speedups and cuts in safety measures that are bombarding the rail industry today.

Driven to maximize profits, the rail industry’s growing disregard for their workers, the communities their trains travel through and the health of the environment is a disaster in the making.

Solidarity between workers, their unions, impacted communities and the environmental movement could be the ticket that puts a halt to the railroads’ unsafe and anti labor practices.