Misogyny rooted in patriarchy has permeated every aspect of U.S. society from the time the butcher Christopher Columbus and his ilk arrived in the Americas hundreds of years ago.

Women and gender-nonbinary people have been viewed as less than cisgender men, when it comes to economic and political equality. Sports on every spectrum, especially on the professional level, play a significant role in reinforcing this inequality. During March — Women’s History Month — it is important to bring some of these issues to light, in terms of both setbacks and victories, to help raise awareness and solidarity.

Two of these instances involve storied teams in the National Football League, the number one professional league in the U.S. The first team is the Dallas Cowboys, dubbed “America’s Team.” Its white owner, Jerry Jones, threatened to dismiss players who took a knee during the playing of the national anthem in solidarity with former NFL quarterback, Colin Kaepernick, who protested racist police brutality in 2016. Two years earlier in 2014, Jones was sued for sexual assault that had occurred in 2009. The lawsuit was eventually dropped due to a five-year limit technicality.

In 2015, four members of the Dallas Cowboys cheerleaders sued the team for voyeurism, when Richard Dalrymple, a Cowboys’ senior vice president for public relations and communications, was caught spying on the women in their locker room as they were dressing for a luncheon. Dalrymple had a security pass key to the women’s locker room. He claimed he mistakenly entered the locker room, even though a “men’s” bathroom was close by.

Dalrymple was also accused of taking “upskirt” photos of Charlotte Jones Anderson, the daughter of Jerry Jones. An out-of-court settlement of $2.4 million was made this February to the four women who had requested the NFL hierarchy do an independent investigation. The NFL refused the request stating the matter had already been settled.

Dalrymple was never forced to take an administrative leave during the investigation. He kept his position until he retired Feb. 2, around the same time that the settlement was made public, seven years after the incidents. Each employee of the Cowboys is “asked” to sign a nondisclosure agreement when management strikes settlements with former and current workers who allege workplace misconduct or wrongdoing. These agreements, which can amount to huge payments (really hush money) to aggrieved parties, are meant to cover-up the despicable behavior of sports bosses like Jones and their minions like Dalrymple.

And there is the case of Daniel Snyder, owner of the newly renamed Washington Commanders. This boss has been accused of creating a culture of rampant misogyny in this multibillion organization. Tiffani Johnston, a former marketing and events coordinator for the team, along with four other female former workers with the team, presented testimony before the House Committee on Oversight and Reform on Capitol Hill in early February on the toxic culture toward women, based on their personal experiences. These witnesses put a lot of blame on the entire NFL for allowing this sexist behavior to be tolerated.

Melanie Coburn, a former director of marketing for the team, told the House Committee, “The NFL is now complicit in this scandal. Ten months, more than 120 witnesses and nothing. [NFL commissioner] Roger Goodell’s claim that he was trying to protect us is outrageous and cowardly. The public optics of him caring is appalling. Goodell betrayed every woman who suffered harassment and abuse at the Washington football team.” (ESPN, Feb. 3)

On a brighter note, the U.S. Women’s National Soccer Team won a historic ruling Feb. 22 that guarantees equal pay with male soccer team counterparts, a major blow against gender discrimination. The U.S. Soccer Federation is legally bound to provide $22 million in back pay to the USWNT over the past six years since the lawsuit was introduced. Despite the fact that these women have won multiple world titles, when the U.S. men’s team has won none, has not prevented this huge pay gap and deplorable treatment on the part of the USSF. 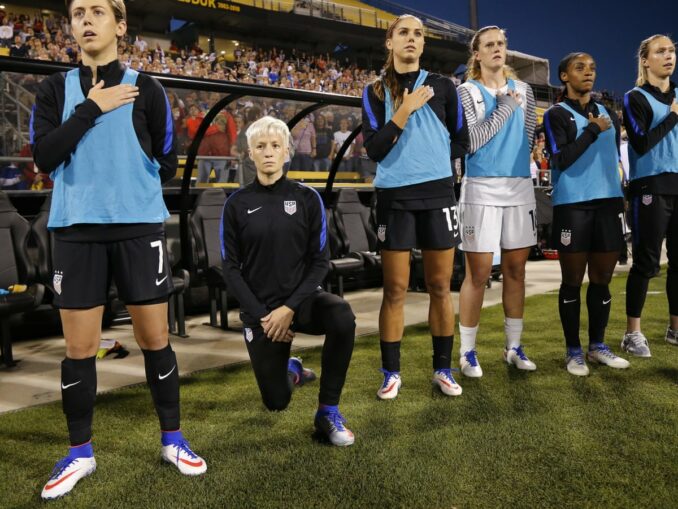 The lawsuit helped bring to light a number of sexual misconduct accusations within the USWNT in 2021, when five male coaches were forced to resign. Megan Rapinoe, a legendary soccer player, stated: “There is no justice unless this never happens again. It’s all part of the same system. It’s part of a system of disrespect and of misogyny and sexism and inequality and discrimination. This is the first step, not the last step.” (Washington Post, Feb. 22)

A next step that Rapinoe is referring to, is to guarantee the same bonus checks for women soccer players who participate in the prestigious World Cup soccer games sponsored by FIFA (International Federation of Association Football).

Last year, women college basketball players exposed on social media the deplorable equipment in a weight room for them, compared to the state-of-the-art equipment for men during the March Madness tournament.

The fight against misogyny is not isolated within football, basketball or soccer but throughout all sports under class society, not just in March but 365 days a year.