The weather was cool in Alabama on Feb. 26, but the Amazon workers’ spirits were hot! 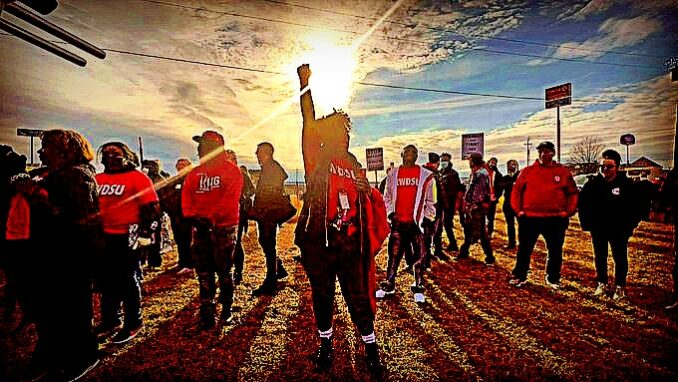 A crowd of hundreds gathered in front of a stage built by local International Alliance of Theatrical Stage Employees (IATSE) members. A banner with the faces of scores and scores of Amazon workers who had voted no in the first 2021 Bessemer election but now are voting “YES!” formed the stage backdrop.

The Bessemer Amazon struggle is being led by the Retail, Wholesale and Department Store Union (RWDSU).

Speakers from supporting unions and labor federations, including AFL-CIO President Liz Shuler, were plentiful and strong in their solidarity with the historic Bessemer union organizing campaign against the corporate power of Amazon. 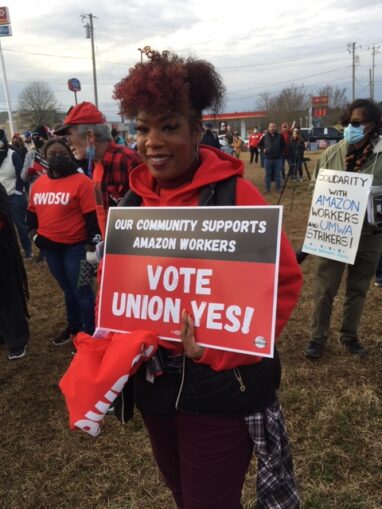 A message was delivered from Ruben Cortina, president of UNI Global Union, with affiliated unions in 150 countries representing 20 million workers: “I come from Argentina, and I speak on behalf of my brothers and sisters from around Latin America. I can tell you now, everyone knows where Bessemer, Alabama, is because of @BAmazonUnion workers.”

Most electrifying were the messages delivered by Bessemer workers themselves, rousing applause and loud cheers from the crowd.

While a number of unions had good representation, the largest presence came from United Mine Workers retirees and active strikers from Brookwood, Alabama. For the last 11 months, these miners have been in a hard fight against the Warrior Met Coal company and megafinance corporation BlackRock.

The miners have shown in practice what union solidarity really means in on-the-ground struggle, as they continue to “hold the line.”

Bessemer Amazon workers have until March 25 to turn in their ballots and reject Amazon’s ongoing union-busting tactics.