Bulletin: As of Feb. 22, Russia has recognized the two peoples’ republics in the Donbass region of eastern Ukraine, the Donetsk People’s Republic and the Lugansk People’s Republic, established in 2014. Russia has said that it will send troops to protect the two republics if they come under further Ukraine/ NATO attack. Washington and some European allies have announced economic sanctions against the two republics and/or against Russia. Working people worldwide must oppose U.S./NATO aggression and expansion, which are creating the danger of a massive war. 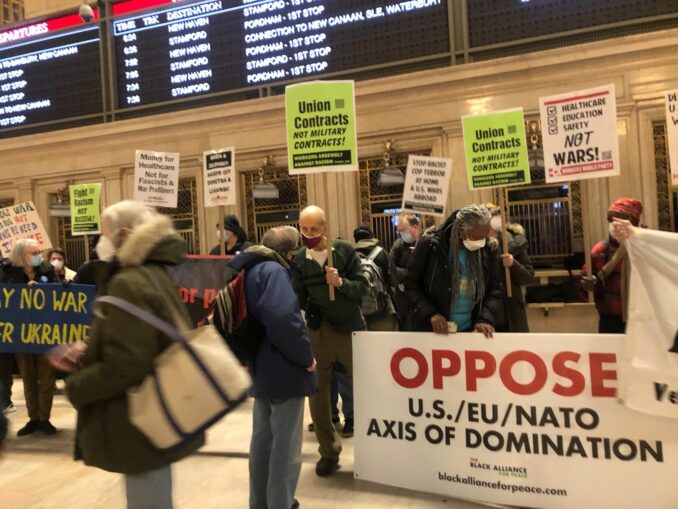 Creating a stampede is an ancient tactic. The earliest hunters knew that an entire herd could be stampeded off a cliff through the calculated use of smoke, noise and relentless drumming.

The European Union is being run off a cliff.

U.S. strategists, war planners, corporate media and politicians are unanimous in demanding that the European Union must prepare to impose the most extreme economic sanctions, especially the drastic step of blocking the new Nord Stream 2 gas pipeline from Russia.

Why are U.S. officials so focused on blocking the Nord Stream 2 gas pipeline from Russia into Germany and other EU countries? Why is the trade in other essential energy supplies also being threatened?

Daily U.S. announcements of ominous information on Russian plans to invade Ukraine have dominated the media for two months. Breaking news headlines announce secret information that U.S. intelligence has of 150,000 Russian troops on the Ukrainian border.

There is another massive buildup of troops that the U.S. media barely mentions. It is being organized by the U.S. military.

The Ukrainian military now has a force of 150,000 troops, armed with modern U.S. weapons and trained by U.S. “advisers,” along with fascist mercenary and Special Ops units near the Russian border and the independent regions in Donbass, which they have been shelling.

Thousands of additional U.S. troops are arriving in the region. U.S.-commanded NATO bases in Poland and Romania are being expanded with advanced missile batteries, able to fire nuclear-capable missiles that can reach Russian cities within 30 minutes. For months U.S. and British naval operations have continued on the Black Sea off the Russian coast.

To understand the imperialist drive toward war with Russia, it is helpful to review Lenin’s “Imperialism: the Highest Stage of Capitalism,” written over 100 years ago and still so relevant.

Lenin wrote during World War I of the enormous economic pressure from monopoly capitalism’s need to control markets and colonies using military power of their home state; this pressure led inexorably toward war. Now, in late-stage capitalism, U.S. and EU imperialism’s fundamental clash is still over markets and grabbing every economic advantage.

Behind the threatened war with Russia is this struggle by the largest monopoly capitalists for control of European markets and resources.

U.S. imperialism, the dominant global power, is striving to maintain its economic position and its domination of global trade and finance.

Russia today is largely an exporter of raw materials and has an economy smaller than South Korea, Canada or Brazil. Washington manufactured the Ukraine crisis in an attempt to further isolate, weaken and divide Russia.

The crisis exposes the intensifying competition to dominate all of Europe, especially Germany, the largest economic power in Europe and the dominant force in the European Union. German imperialism is both a U.S. ally within NATO and a capitalist economic competitor of the U.S.

That Russia has provided a reliable energy source threatens U.S. economic domination of Europe. Washington perceives this trade as opening the door to further trade with Russia. Of even greater concern, it’s an opening to China’s Belt and Road trade and development initiatives.

China has already surpassed the U.S. as the largest trading partner of Germany and of the EU as a whole. And the EU is the largest investor in Russia.

NATO, a U.S.-commanded military alliance, exists to enforce Washington’s dominance within Europe and to intervene in other parts of the world. NATO was expanded to every country of Eastern Europe to lock in place capitalist restoration of the formerly socialist countries. The threatened expansion of NATO’s military machine to Ukraine, on the border of Russia, along with NATO naval operations in the Black Sea, are direct provocations of Russia.

Expanding EU trade with Russia and China threatens the very basis of NATO and the purpose of positioning hundreds of U.S. military bases in Europe.

The Nord Stream 2 pipeline is now complete. It was awaiting final certification by German regulators, which the German government is withholding. The pipeline, which transmits Russian natural gas under the Baltic Sea directly to Germany, also bypasses Ukrainian transit infrastructure.

Russia already provides around a third of Europe’s natural gas through other existing pipelines. While it is far cheaper, environmentally preferable and more direct to build pipelines from Russia to European customers than to export from North America, U.S. corporations are driven to offload liquefied natural gas (LNG) gas in Europe, Asia or elsewhere.

Both Democrat and Republican politicians are united in their determination to stop Nord Stream 2.

U.S. finance capital, its banks and its oil, gas and military corporations consider the pipeline a threat to U.S. control of Europe, which is why Washington has tried to sabotage the project at every turn.

The Trump administration launched sanctions against the Nord Stream 2 project. But to Washington’s frustration, the pipeline construction continued.

The U.S. corporate media are totally unanimous in repeating relentless charges that Russia is the aggressor and must be stopped by sabotaging the Nord Stream 2 gas pipeline. According to this propaganda, nothing less will suffice.

Throughout Europe there has been a building spree of dozens of LNG terminals to accept fracked gas from North America into European markets.

The advent of hydraulic fracturing or “fracking” has transformed the U.S. into an oil and gas superpower. The U.S. is the largest exporter of LNG in the world, surpassing Qatar in December 2021. The U.S. has surpassed Russia as the world’s largest gas producer.

Most U.S. gas is produced by fracking. Environmentalists have opposed fracking, because the extraction process poisons local groundwater quality and causes seismic events.

To store and transport natural gas extracted through fracking, it is chilled to minus 162 C (minus 260 F), which transforms it to liquefied natural gas, which is 1/600th of its volume in a gaseous state. The liquid is shipped in reinforced massive tankers called LNG carriers in large, onboard, supercooled (cryogenic) tanks to the special LNG terminals in Europe.

LNG needs to be transformed from its liquid state back to gas and then transported through pipes at high pressure.

The challenge for U.S.-based fossil fuel corporations is to secure markets. More natural gas is being produced than can be used domestically.

U.S. oil and gas giants, as well as all U.S. politicians, have pushed European countries to increase their capacity to receive LNG by framing it as an energy security issue. Shifting purchases to the U.S. will make all the European economies dependent on U.S. pricing.

Since the 2018 meeting of U.S. and EU Commission presidents, U.S. LNG exports into Europe increased by 2,240%. (tinyurl.com/yr9xwrne)

Most of the news on the role of Nord Stream 2 and the pressure to expand the sale of U.S. fracked gas is in the business news. (tinyurl.com/78h2yymt)

But a Feb. 15, 2022, New York Times article: “How a Ukraine Conflict Could Reshape Europe’s Reliance on Russia,” described the conflict with charts, maps of vast interconnected gas pipelines from Russia into eastern Europe, Germany and Italy. It also detailed the dozens of LNG terminals being hastily constructed. (tinyurl.com/8b9n4w62)

The threat that harsher sanctions will be imposed on Russia — including the inevitable blocking of the Nord Stream 2 pipeline — has boosted U.S. sales of LNG and filled European LNG terminals to capacity.

Washington is frantic to short-circuit any European plan to further integrate with Russia or China. Sanctioning Russia and disrupting its trade to Europe — trade that is advantageous to Europe and Russia — give U.S. imperialism financial and geopolitical advantage.

As they step up anti-Russian propaganda, President Joe Biden, Secretary of State Antony Blinken and Under Secretary of State Victoria Nuland have included threats of drastic economic measures. These measures will reshape and impoverish Europe and put it firmly under U.S. market control and under U.S.-commanded NATO control.

On Feb. 7, President Biden, while standing next to the new chancellor of Germany, Olaf Scholz, said the U.S. would “bring an end” to the Nord Stream 2 natural gas pipeline if Russia invades Ukraine.

When pressed for details on how he would keep that promise, given that the pipeline is not under U.S. control, Biden replied, “I promise you; we will be able to do it.”

German Chancellor Scholz, meanwhile, declined to take a firm stance on the fate of Nord Stream 2. Then on Feb. 20, British Prime Minister Boris Johnson declared that London and Washington will cut off Russian companies’ access to U.S. dollars and British pounds and freeze all transactions. But Germany, France, Hungary and even Ukraine have pushed back against such dire predictions.

Every U.S. war and every imposition of U.S. economic sanctions have been accompanied by fabricated incidents, following months of propaganda.

After the U.S.-orchestrated coup in Ukraine in 2014 overturned the elected government in Kiev, the capital, workers in the heavily industrialized eastern Ukraine refused to recognize the new anti-Russian regime. Instead they seceded from the fascist coup government in Kiev.

The People’s Republic of Donetsk and the People’s Republic of Lugansk in the Donbass have twice withstood efforts by Ukrainian forces, including fascist elements, to defeat this breakaway region. The Kiev regime is intensifying shelling and missile attacks on the independent republics to provoke Russia to protect them.

The U.S. has tens of thousands of troops in Europe; it is putting troops on high alert and sending more. They are arming the Ukrainian military, and they are expanding NATO bases and sending additional arms and missiles to other NATO countries in the region.Only months after the chaotic defeat of the U.S. occupation of Afghanistan, U.S. imperialism seems to be preparing for another and far more dangerous war.

U.S. imperialism needs a war threat to maintain its position in Europe.

As Lenin showed in “Imperialism,” the drive to war and the threat of war can easily explode into a conflagration that destroys a continent.

Working people in the U.S. and in the European Union, not to mention in Russia and Ukraine, have no interest in another imperialist war.

U.S. war propaganda must be met with determined opposition.