The following speech was given at a Feb. 5 antiwar demonstration in Portland, one of 70 that took place around the world that weekend. Since then the crisis has continued, threatening to emerge into a global, U.S.-driven catastrophe at any moment. Endless rhetoric framing a Russian invasion as inevitable has continued, including an erroneous Bloomberg article that stayed public for 30 minutes claiming that an invasion had occurred. In recent days Russia has made attempted moves at diplomacy with the United States and even responded to pressure by withdrawing a number of their troops. The U.S. has replied to this with continued threats of a “bloody, destructive war” and “international condemnation.” 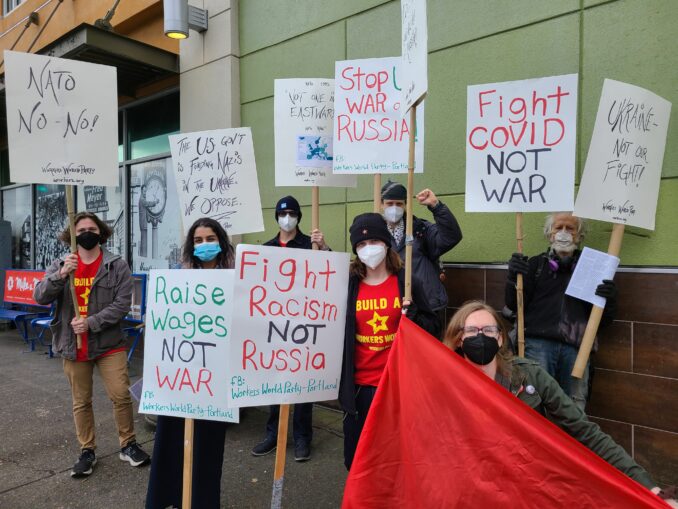 When we see all these hawkish news articles about Russia, we must remember that this is not the same Russia of the 20th century. This is not the Soviet Union. Russia does not have global superpower status anymore. It is a target of U.S. imperial conquest through the vessel of NATO.

We can speculate military strength through nuclear capability, but in fact the U.S. accounts for over 36% of total global military expenditure, while Russia accounts for about 4%. The Russian economy is smaller than the economies of Brazil, South Korea or Canada. So why is it a target?

It’s not a question of power or ideology, it’s a question of resources. Gas and oil make up 80% of Russia’s exports. It has one of the world’s largest petroleum industries. In the past two decades, we’ve seen the U.S. plunder of an entire region for oil, so these motives should seem hauntingly familiar.

It is important to remember that this is not a new conflict. This is the culmination of over 30 years of slow-burning history. In 1990 Secretary of State James Baker pledged to Mikhail Gorbachev, the former president of the USSR, that NATO would not expand “one inch eastward.” When that statement was made, there were 16 member states of NATO. Today, there are 30.

Ukraine has historically been one of Russia’s largest trading partners. But the U.S. does not want any of this trade to take place. The U.S. wants Ukraine out of Russia’s hands to be reabsorbed as an asset of NATO. There has been a ridiculous influx of capital from the U.S. to Ukraine, up to $5 billion since 2014, when the U.S. heavily backed and armed groups of fascists, neo-nazis and ultranationalists to overthrow the pro-Russian government, install one aligned with U.S. interests and upset trade between Russia and Ukraine in favor of trade with the European Union.

Ukraine is just another piece on the chessboard for the United States. NATO has almost completely encircled Russia militarily over the last three decades. There were endless promises made to Russia on the eve of its birth from the ashes of the Soviet Union: a place among the capitalists in the G7, no further military expansion from NATO, the chance to not be bullied ruthlessly and endlessly by the West anymore. None of these came to fruition.

When the Soviet Union dissolved, so did their Cold War military alliance. The Warsaw Pact is gone. So why is NATO still here? Why has it expanded and continued to pick on the corpse of its former rival?

The U.S., through NATO, has made it clear that it is targeting Russia and that it is hungry for war now. But the people don’t want another war in this stale age of endless wars! We want health care, education and a safety net! We want an end to this awful pandemic and to the rampant racism in this country! We want living wages and union contracts, not military contracts, bloodshed or imperial conquest!

NATO’s interests are not our own! The U.S. is playing the same despicable war game it’s always played, and we must reject that game!