A crowd of Oakland longshore workers and teachers rallied Feb. 17 at City Hall to raise two demands: “Save Our Port,” which is under attack, and “Save Our Schools,” many of which are threatened with closure. The main organizer of the rally was Local 10 of the International Longshore and Warehouse Union. 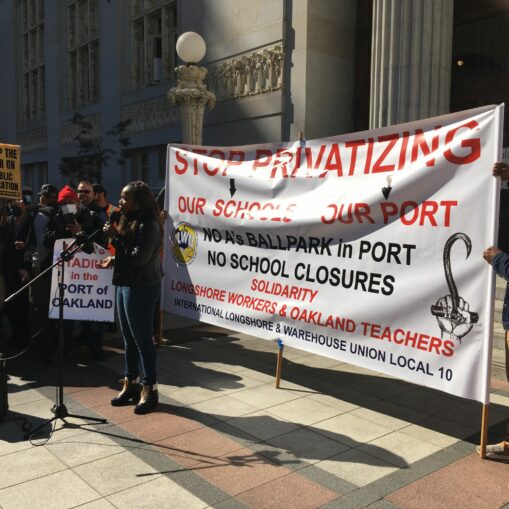 Trent Willis, immediate-past president of Local 10, denounced the plans of John Fisher, owner of the Gap Stores and the Oakland Athletics baseball team, to build a new ballpark in West Oakland. The chosen site is Howard Terminal, part of the Port of Oakland.

“This is industrial land,” said Willis, “providing jobs since the 1930s, supporting Black and Brown people. The Port is an artery that keeps Oakland and surrounding counties going. So don’t be complacent: Fisher’s plan to wipe out Howard Terminal is a real threat to longshore jobs in Oakland!

“These billionaires think they can come into your city, take your land, take your jobs, while they live high on the hog on a hill somewhere,” said Willis. “These decisions affect all of our families. Every generation of longshore workers has had to fight a battle. Now it’s our turn to stand and fight. When it’s time to throw down, you’ve got to show up. It’s hard to beat the system if you’re standing at a distance.”

Linda Adams, a Local 10 member, said, “For them, this is not about the ballpark. It’s about making money off prime real estate. But for us, it’s about preserving jobs in the Port. We’ve been at this port since the 1930s. This port belongs to us! This fight is really for the kids who are coming behind us.”

Jack Heyman, retired longshore worker, said the Port of Oakland “is an economic engine for northern California. Why give it away to John Fisher and his cronies? These are good jobs we are fighting for. The Oakland mayor is in the pocket of the billionaires. This is a defining moment for Oakland. The ‘powers that be’ want to gentrify, without providing the jobs people need . . . without providing housing for the homeless people who are sleeping under the freeways going into the Port!”

The threat to Oakland schools

A Feb. 22 article in the Oakland Post newspaper posed this question: “How does real estate development at the Port connect to closing schools? Some political observers say an ongoing attempt to displace residents and ‘whiten’ Oakland has two component parts: One is the snatching of public funds and property to build luxury housing, as Fisher is doing at the Port. The other part is removing neighborhood schools attended by generations of Oakland residents and replacing them with charter schools and private schools designed to appeal to more affluent newcomers.”

Adding that the stadium/real estate project “seeks to take over public land at the Port of Oakland, potentially fatally disrupting the Port’s functioning,” the article pointed out that Fisher is not only a baseball team owner. “He is also a charter school tycoon,” sitting on the board of KIPP Schools, which has a large network of charter schools across the country. Fisher is tight with Oakland Mayor Libby Schaaf, another supporter of privatized charter schools.

“I originally came from Detroit, where they’ve been closing public schools to bring in charter schools,” said Linda Adams at the rally. “As an Oakland ILWU-strong woman who supports unions and supports our public schools, I’m not standing for any of it.”

Ismael Armendariz, speaking for the Oakland Education Association, said “Privatization has taken hold, and the worst effects are on Black and Brown students, especially affecting the Black community. California is the wealthiest state. How can they allow schools to close? How can they allow the Oakland Port to be degraded?”

Trent Willis recalled a popular 1960s song, “Waiting for the world to change.” “Well, we’re not waiting,” he said. “Don’t we have a right to jobs and schools? If a union can go on strike over wages and conditions, then why not have a general strike for the jobs and schools that the people really need?”