Migrants, refugees and their supporters participated in a march and rally in Philadelphia on the national ‘Day Without Immigrants’ Feb. 14, to demand that President Joe Biden keep his campaign promises and grant them citizenship now. Despite frigid temperatures the protest, which started with around 30 people, grew to well over 100 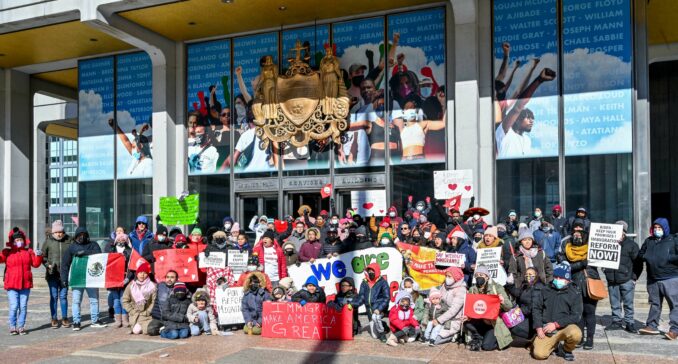 Some participants spoke of attending the original Day Without Immigrants in 2006 as children, when millions of migrant workers shut down businesses to show how central they were to the U.S. economy and demand legal status. Sixteen years later, they are living reminders of how many years have passed without any legislative progress in Congress.

Similar marches took place in Boston; Houston; New York City; Washington, D.C.; Columbus, Ohio; and cities in New Jersey, California, Arizona, Indiana and other states. The movement was initiated by TikTok personality Carlos Eduardo Espina, who had participated in a 2017 Day Without Immigrants as a high school student.

In Philadelphia, home to 50,000 undocumented people, the march began in Love Park, an appropriate location for Valentines Day, where lead organizer Maria Serna welcomed everyone and explained to the press why many people were refusing to work, go to school or shop — to demand the Biden Administration pass legislation that would lead to citizenship for the 11 million undocumented people living in the U.S.

Most of the speakers gave their remarks in Spanish, so it was significant that the march stopped at two statues around City Hall honoring historic Black leaders. At the Octavius V. Catto memorial, Workers World Party member Joe Piette described Catto’s efforts to enfranchise Black men in the 1870s, before he was assassinated for his activism on Oct 10, 1881. Piette pointed out that 150 years later, we are still fighting against racist forces who don’t want Black and Brown voters to elect people who could pass laws their communities need. 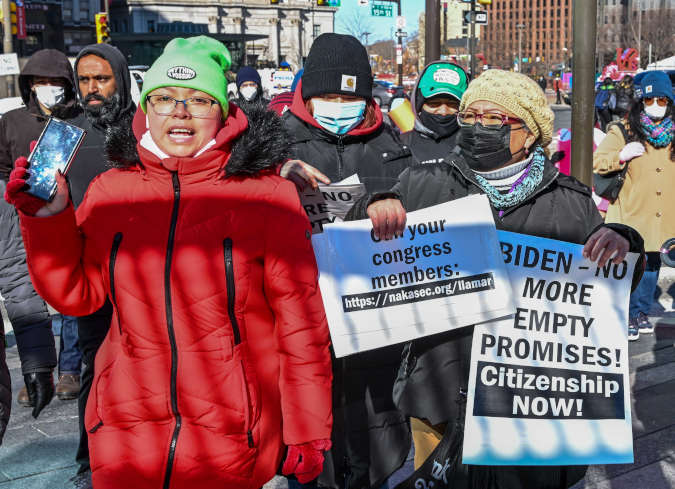 On the opposite side of City Hall, participants stopped at the statue of Harriet Tubman, where Melissa Robbins of North East Against Racism said, “Liberation, freedom, the will to survive — that is what we Black and Brown people fight for every day. Our fight is against white supremacy. That is our fight.”

A dozen people spoke at the ending rally in front of the Municipal Services Building. Annaline Ceron Hernandez, one of the rally’s organizers, said: “Since the pandemic, millions of undocumented immigrants have been on the front lines, working to keep people safe and healthy. Now we are here to ask for the immigration reform that Biden promised to deliver in the first 100 days of his term. We demand he keep his promise!”

Several speakers announced their intention to organize for a mass march on May 1. On that day participants expect to be in the streets in larger numbers, carrying the same signs that say: “Biden — No more empty promises! Citizenship now!”