Oh, the trials and tribulations of centibillionaire Jeff Bezos — what to do with $203 billion? Go into space? Done that. Go into space a second time? Lost the thrill when Elon Musk, who took over your title as ‘the world’s richest man,’ launched his own ship. 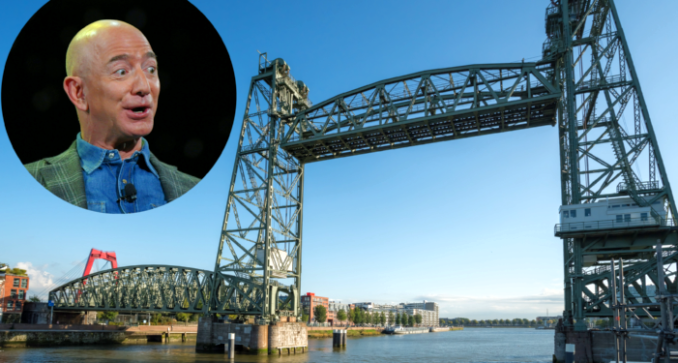 Jeff Bezos asked Rotterdam to dismantle part of its historic “De Hef” Koningshaven bridge, so his $500 million superyacht can pass through this summer

How does a billionaire make sure they will be remembered by future generations — and not just vilified for all one’s capitalist greed? Why not buy naming rights to a building, or two?

Bezos recently donated $200 million to the Smithsonian, the largest single gift to the institution since it opened. The “gift” grants Bezos the right to have his name placed on different locations in the Air and Space Museum for at least 50 years. Fortunately for Bezos the Smithsonian does not insert a “morals clause” in gift agreements, so they are stuck with his name on their walls, regardless of any abhorrent behavior on his part.

In late 2021 Bezos donated $2.7 million to the District of Columbia Public Library Foundation — again the largest contribution ever received by the foundation. In early February the D.C. Public Library’s Board of Trustees voted to name the auditorium at the Martin Luther King Jr. library after Bezos. Community activists from For Us Not Amazon (FUNA), a Northern Virginia coalition including migrants and people of color, and Athena, a coalition of over 50 grassroots organizations quickly denounced the plan, gathering over 17,000 letters of opposition.

Their joint statement to the MLK Board of Trustees raised that Amazon represents everything Dr. King fought against. “Dr. King would have stood by Amazon workers, while Bezos has turned worker pain and wage theft into luxury trips to space, a $500 million mega yacht and a string of mansions.” The board reversed their decision.

Shortly before stepping down as Amazon CEO, and after the company spent millions to beat back the union drive in Bessemer, Alabama, Bezos wrote a final letter to shareholders stating his commitment to make Amazon the “Earth’s Best Employer and Safest Place to Work.”

But fancy phrases and philanthropy won’t bring Bezos redemption nor make Amazon workplaces safer. Fundamental improvements in wages and working conditions will only happen when Amazon workers organize and fight to take back the billions Bezos stole from exploiting their labor.