In December 2021 a government college in India’s Karnataka province denied entry to six students attempting to enter class, because they were wearing hijab, a headscarf worn by many Muslim girls and women. School administrators alleged that wearing a headscarf was against the school’s dress code and stated that the students could not attend class until they removed their hijab. 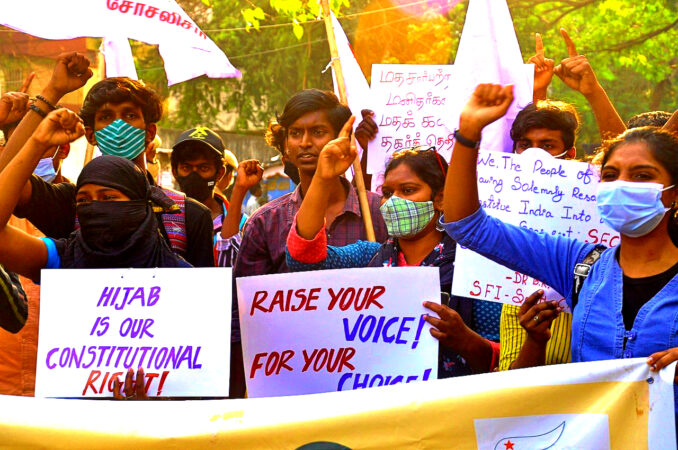 Instead of complying with the school’s discriminatory policy, the students protested outside their classroom, asserting that they had a constitutional right to wear a hijab in school, and they would not concede to the administration’s coercive tactics.

In response to the students holding their ground, several colleges in Karnataka implemented the same discriminatory policy, and reactionary anti-hijab protests erupted on college campuses. At Government Pre-University College, RN Shetty College, Mahatma Gandhi Memorial College and other educational institutions in Karnataka, many students started wearing saffron shawls, a garment which is regularly worn by members of Hindu right-wing groups.

At Government First Grade College, Shivamogga (a city in Karnataka), college students wearing saffron shawls hoisted a saffron flag on a flagpole that is typically reserved for India’s national flag. Minister of Rural Development of Karnataka K.S. Eshwarappa commented on the incident and stated that “Hindu Dharma will prevail in the country sometime in the future. Then we’ll hoist the saffron flag at Red Fort [the site where the prime minister hoists the national flag on India’s Independence Day].” (Feb. 9, ANI Twitter)

To counter the rise of Islamophobia on college campuses, students across the country have organized actions in solidarity with those resisting the hijab ban. At IDSG College Chikkamagalur, Karnataka, Dalit students wore blue shawls and voiced their support for their classmates who wear hijab. (timesnownews.com, Feb. 8)

On Feb. 11, Students Federation of India, a student organization politically aligned to the ideology of the Communist Party of India (Marxist), issued a national call to action against the hijab ban; members organized protests in Tamil Nadu, Karnataka, Kerala and Delhi. At the demonstration in Delhi, police attacked and arrested SFI members. At Delhi University, members of Students Islamic Organization of India, Bhagat Singh Chaatra Ekta Manch and other student groups were arrested for protesting against the hijab ban.

Due to widespread unrest, the Government of Karnataka closed schools Feb. 9. However, they plan to resume classes Feb. 14 for students in 10th grade or lower. On Feb. 10, the Karnataka High Court began assessing the issue of whether students can wear hijab in class.

Regardless of what the court decides, workers must understand that the recent discriminatory policies targeting Muslim students fall within the fascist Bharatiya Janata Party’s (BJP) larger campaign to eliminate Muslims and other minorities.

BJP is India’s ruling party and one of the key organizations in the current Hindutva (Hindu nationalism) movement. Recently, BJP and other right-wing groups have called for an increase in youth’s participation in systematically murdering Muslim people.

A report issued in January stated: “Hindu extremists have organized 12 events over 24 months in four states [provinces], calling for the genocide of Muslims.” (Jan. 10, Article 14) In August 2021, Hindutva leader Pinky Chaudhary asserted, “No matter who comes to power, we will not allow Muslims to rise up. We are in the process of awakening our youth. We will get mullahs [Muslim religious leaders] out of graves and finish them from their roots.”

During an event held Dec. 17-19, 2021, participants called for genocide against Muslims and attacks on Christians. Attendees demanded arming Hindus and organizing an insurrection against the government if the government attempted to prevent them from engaging in ethnic cleansing. One speaker stated that “Muslims won’t be killed by swords now. You have to defeat them in technique. . . . More and more kids and better weapons, only these can save you.”

As a Muslim whose family migrated during the Partition of India in 1947, growing communalism and tension in India mirrors some of my relatives’ experiences. However, coordinated action among workers across India is brimming with potential and possibility. Polarization and sectarian violence only benefits the ruling class — build a workers world!