Ten years ago today on Feb. 26, Trayvon Martin, an unarmed Black teenager, was murdered by an armed fascist in Sanford, Florida. The murderer, George Zimmerman, was found “not guilty” in a powerfully racist court decision, and all charges were let go. 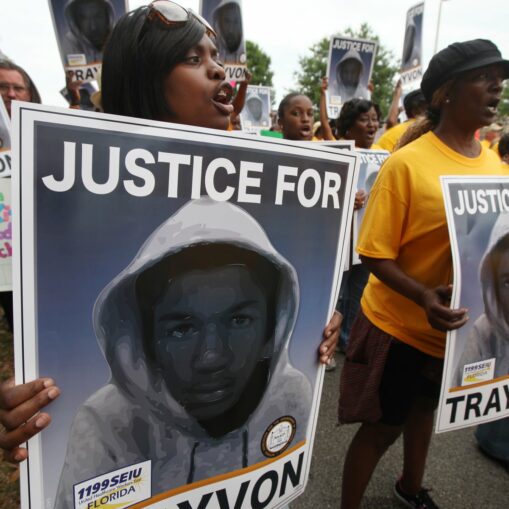 Labor unionists in Florida demand justice for Trayvon Martin in 2012.

The murder and acquittal were followed by enormous protests countrywide and were instrumental in spawning the Black Lives Matter movement from a hashtag used following news of the verdict.

On this anniversary, we honor and still mourn the loss of Trayvon Martin and the countless other people of color who have been stolen from us by the fascist and racist forces of the United States in both recent years and throughout its entire history.

Trayvon Martin was 17 at the time. He was returning home from a convenience store with candy and an iced tea at 7 p.m. in his father’s neighborhood, when an armed “neighborhood watch leader” Zimmerman began stalking him.

Zimmerman called the police to report “suspicious activity,” hung up and confronted Trayvon and shot him dead outside his father’s residence. Trayvon continues to be immensely missed by his family, his friends and his community.

He was known to be very devoted to his family, even having saved his father from a burning car when he was only nine years old. He had an affinity for sports, bikes and aviation and was described by his friends and loved ones as funny, kindhearted and respectful.

Trayvon was too young to be considered anything but innocent; yet, the noxious and parasitic capital media put out their time-honored narrative of racial indoctrination: the Black man who dies unexpectedly and without precedent is more at fault than the armed aggressor who killed him.

But Zimmerman is a violent and undefendable vigilante protected by the biased courts. Two months after his murder acquittal, he threatened the lives of his then-spouse and punched his father-in-law. No charges were pressed. Two years later he threw a wine bottle at his female partner and was arrested, but the charges were eventually dropped; and again, he faced no consequences.

Finally, in an explosion of evil, Zimmerman sold the gun that he used to kill Trayvon Martin for $250,000, branding it as an “American Firearm Icon.” From a KNTV Las Vegas TV interview, when questioned about how the family of Trayvon Martin must view this deal, George let forth pure toxicity: “Sure, I’m sorry for any parent that has lost a child . . . That being said, I also believe it’s their duty to have an internal dialogue to see what they should have done better. . . . They didn’t raise their son right.” (May 20, 2016)

Zimmerman then had the unmitigated gall to sue Martin’s family for $100 million in 2019 for “malicious prosecution and defamation”!

Zimmerman partnered with an Islamophobic friend to sell paintings of the Confederate Battle Flag, so they could raise money to start a “Muslim-free” gun store. They were interviewed as patriots.

George Zimmerman has upheld the racist values of the United States and so has been disgustingly rewarded with legal immunity from the government. This case demonstrates the power of the police and court system that is wielded against the people.

There was no justification conceivable outside pure, unadulterated racism that allowed this villain to walk free. In letting him go, the ruling class has shown to the people clearly what their position is and with whom they side. Fascists since Zimmerman have been comforted in knowing the racist U.S. state will only dole out an investable share of power rather than any sort of punishment. The U.S. is comforted in knowing they have a willing agent to carry out their terror and inspire others to do the same.

Since Martin’s death, the people have been rattled by countless other stories of Black and Brown people being killed by fascists, most commonly as police officers. In overwhelming instances, no serious legal action, if any, is taken against the murderers. This is wrong. It is a pattern of evil.

We will not bow to the staying power of George Zimmerman and give up hope. The struggle continues, and it has grown mightier. Where the United States and its entrenched capitalist system had individual George Zimmermans on its side, the anger, size and potential power of the people grew by the millions.

Consciousness of race and class, knowledge of systemic oppression, police brutality and still-burning racial tensions in this country flooded the minds of the masses, planting many seeds that today have grown into many saplings, stronger now against the winds that threaten them. The dismantling of Confederate and colonial statues is an important harbinger of more resistance to come.

We must get angry and stay angry! Capital will not look twice at who it kills in its wake. It will even cheer on these deaths and subsume them to its benefit as fascism grows.

The writer, an anti-racist activist in Portland, Oregon, was 16 years old when Trayvon Martin was murdered.