During the week of Jan. 30 to Feb. 6., an ad hoc coalition of U.S. anti-imperialist organizations in the United States held over 70 protests against U.S. and NATO aggressive actions directed at Russia. These ranged from holding signs and banners in well-trafficked areas or on highway overpasses to days of protest Feb. 5-6 to show the breadth of opposition to a U.S. war.

The groups called the actions because the U.S., working through the North Atlantic Treaty Organization, is threatening war on Russia, using the pretext that Russia is trying to invade Ukraine. The underlying reason is, in fact, U.S. imperialism’s drive to maintain and expand its global economic and strategic hegemony.

NATO was established under U.S. direction after World War II specifically to oppose the socialist USSR in Europe and prevent worker revolutions from taking place in Western Europe. Following the collapse of the USSR in 1991, the U.S. has pushed successfully to increase the number of countries in NATO to oppose any independence from the U.S. in the area, spreading especially to some former USSR allies and Soviet republics.

Headlines in all U.S. media continue to blare the “danger” of Russian aggression in the area. Yet which country has projected its military abroad? According to PONARS Eurasia, an independent academic research network, the Pentagon operates over 700 military facilities outside its borders, while Russia has fewer than 20, as of September 2021.

The Biden administration has flown $200 million worth of weapons and other “lethal aid” to Ukraine and has 8,500 U.S. troops on standby to enter that country. The U.S. wields NATO to threaten or wage war against Russia, in clear violation of international law and the Charter of the United Nations. This current escalation of aggression threatens a new, possibly nuclear, world war. (See “U.S. — Hands Off Ukraine!” Workers World, Jan. 27)

Here are reports from some of the actions, most of them held Feb. 5: 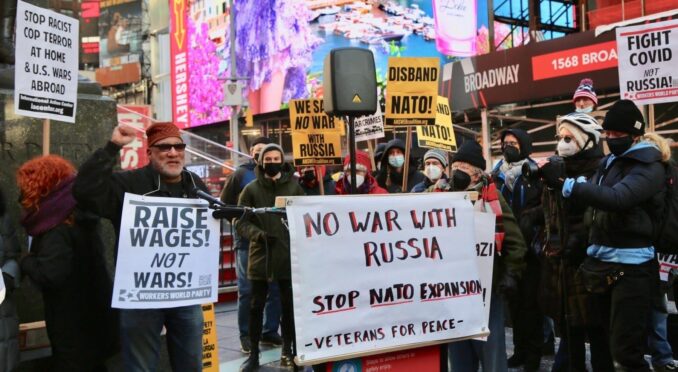 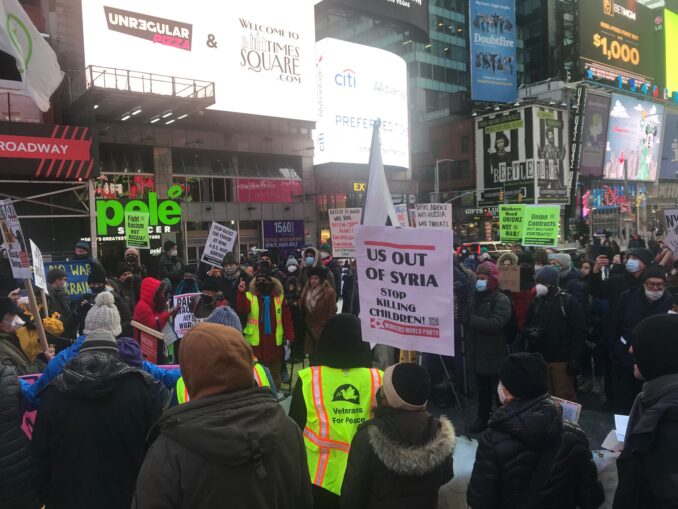 In New York City over 100 activists braved bitter cold to rally on the north end of Times Square on the famous “red steps.” Over 15 different organizations collaborated on this protest, all with speakers at the rally. These included the International Action Center, Vets for Peace, Call to Action on Puerto Rico, CODEPINK, Workers Assembly Against Racism, Black Alliance for Peace, Workers World Party, ANSWER Coalition, the Green Party and Socialist Action. While the groups represented different political perspectives, there was an air of cooperation. Their message, which they brought to a virtual rally earlier in the day, was focused on stopping any plans of the U.S. government for a new war. (tinyurl.com/mr42suds)

Philadelphia activists gathered at the federal building to raise their objections to another U.S. war. After holding signs visible to passing cars and handing out flyers to passersby, participants marched around the nearby Liberty Bell. Brandywine Peace Community organized this event locally. 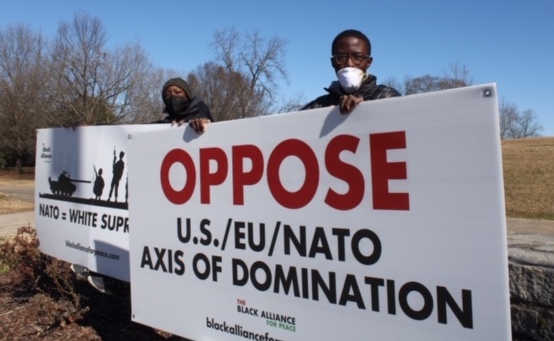 Despite freezing temperatures and a blustery wind, some 30 determined antiwar activists assembled at a busy intersection in Atlanta. Their signs and banners called out objections to incessant war propaganda coming from the Biden administration and big business media. Protesters labeled NATO a tool of U.S. rule and demanded money for jobs, housing, health care, education, not war; supported union contracts for workers, not military contracts; and demanded U.S. out of Eastern Europe. The message was clear: Not another imperialist war! Initiated by the International Action Center, the action was sponsored by other local groups including the ANSWER Coalition, Black Alliance for Peace, Georgia Peace and Justice Coalition and Workers World Party. 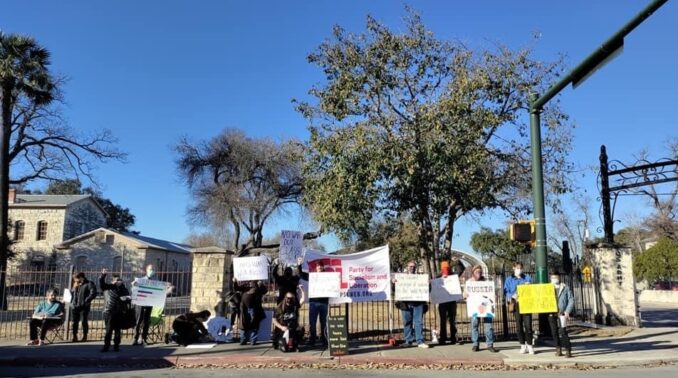 In San Antonio, people gathered at the gate of Fort Sam Houston to demand “No U.S. war!” The fort is part of the giant Joint Base San Antonio, together with Lackland Air Force Base and Randolph Air Force Base. Many of the speakers were former military members, who gave very moving accounts about their experiences that led them to become antiwar activists. Several organizations including About Face, the National Nurses Organizing Committee of Texas/National Nurses, the Party for Socialism and Liberation, Vets for Peace and Workers World Party participated. 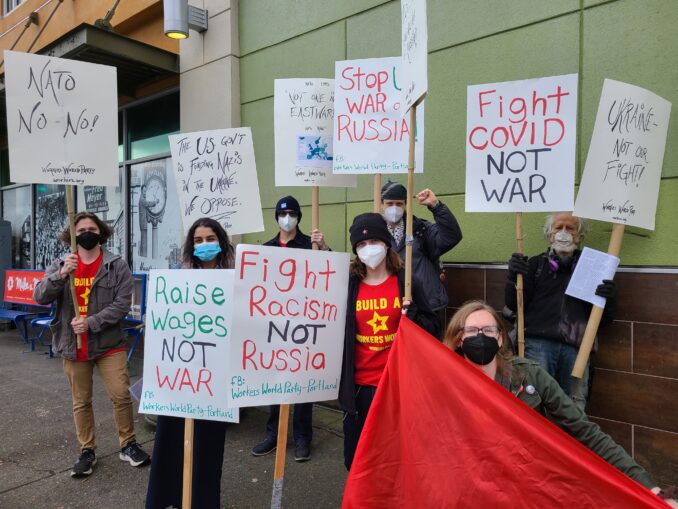 In Portland, Oregon, the local Workers World Party branch hosted a rally against U.S./NATO warmongering at the Cesar Chavez/Hawthorne intersection, a thriving hub for working-class Portlanders. WWP organizers were joined by the International League for People’s Struggle, the Portland Central American Solidarity Committee, and Students United for Palestinian Equal Rights from Portland State University. After an hour’s outpouring of support from the community, the rally joined forces with CODEPINK, Democratic Socialists of America, Extinction Rebellion and Veterans for Peace to protest outside the federal building. 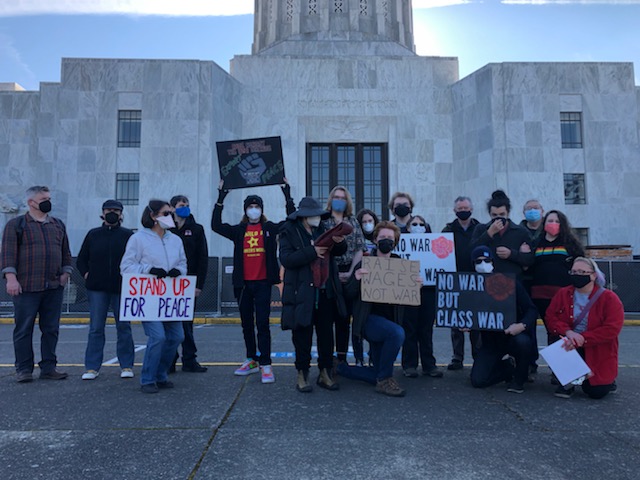 The Salem, Oregon, community gathered outside the State Capitol to demonstrate against U.S. aggression and imperialism. The Feb. 6 event, jointly planned by Socialist Action, the Student Solidarity Union of Willamette University, Youth Against Empire of the United National Antiwar Coalition (UNAC) and Workers World Party-Portland, also saw strong turnout from Salem DSA and both SEIU and unorganized workers. Demonstrators marched downtown and received a warm welcome of honks and cheers along the way. Those attending have made plans to continue these actions and political education under the name “Salem Against War.” 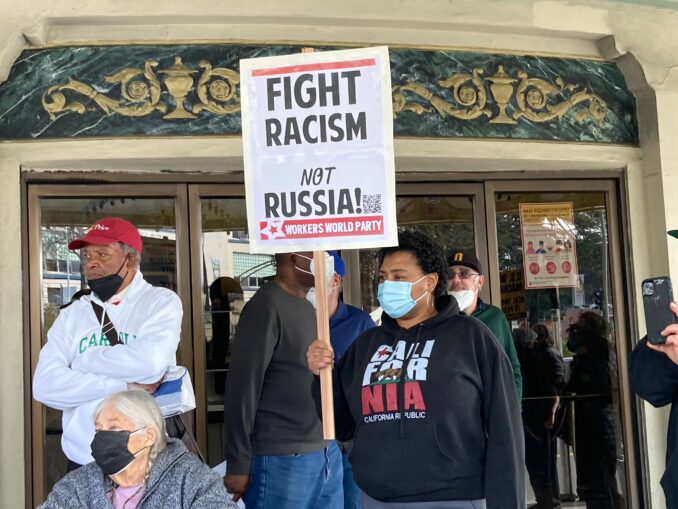 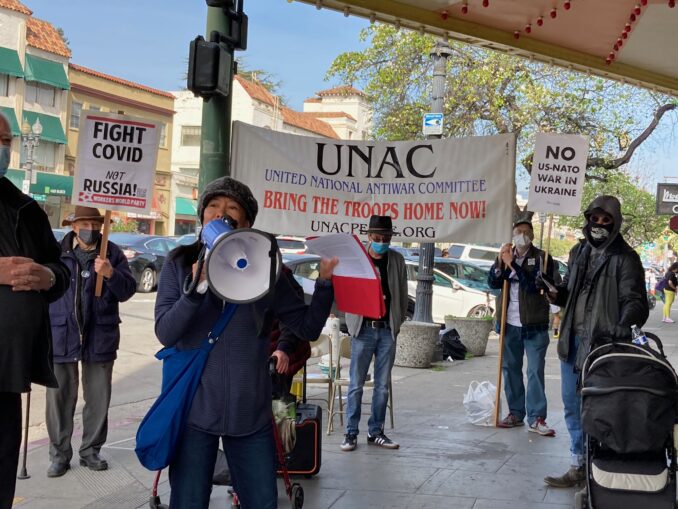 In the San Francisco Bay Area, California, Over 75 people rallied outside the Grand Lake Theater in Oakland to demand “No War Against Russia! Fund Schools & COVID Relief Not War!” The demonstration drew the attention of hundreds of people at the busy intersection by the Farmers’ Market. Speakers were united in demanding that the Biden Administration stop all war plans and withdraw all troops and other military aid from Ukraine and nearby European countries. Rhonda Ramiro of BAYAN challenged the crowd to dismantle the U.S. war machine from Ukraine to the Philippines. Bill Balderston of the Oakland Education Association spoke on the injustice of closing Oakland schools while spending millions for war.

The Oakland rally was sponsored by the United National Antiwar Coalition and the International Action Center, as well as the ANSWER Coalition, Black Alliance for Peace, CODEPINK and other antiwar and progressive organizations. Co-chairs were Jeff Mackler of UNAC and Judy Greenspan of the IAC, who emphasized the antiwar movement should not call for negotiations but for the total U.S./NATO withdrawal from the region and an end to all moves toward war. A smaller rally was held later in Berkeley at Martin Luther King Jr. Civic Center Park, sponsored by CODEPINK, where people marched and leafletted against U.S./NATO war threats.

Over 700 people registered for a Feb. 6 webinar sponsored by UNAC, which featured antiwar activists from Russia, Ukraine and the U.S. (youtube.com/watch?v=8IFzExFo04s)