“This isn’t a budget fight; this is a war,” said Jessica Black, Black Sanctuary Director of the Black Organizing Project, at the night’s massive rally against school closures in downtown Oakland Feb. 4. Black, who is an organizer of Reparations for Black Students, stated further, “This is a war on Black and Brown communities. This is a war to erase Black Oakland.” 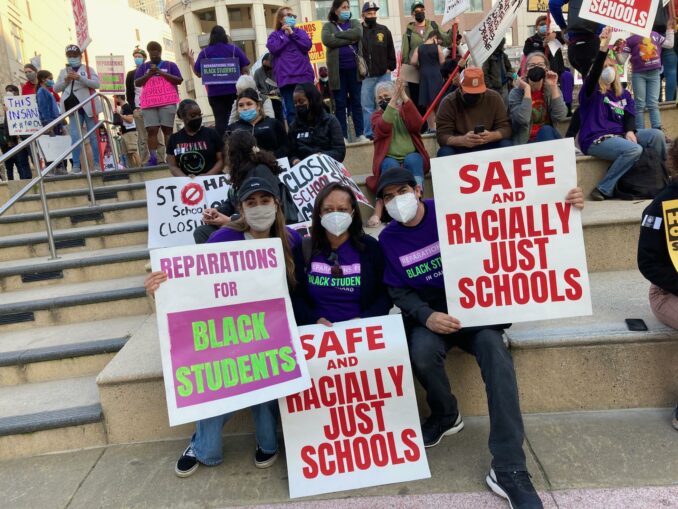 The rally was one of a weeklong series of protests against Oakland Unified School District’s plans to close primarily Black and Brown Oakland schools. A coalition of Black educators, school workers, students, parents and community members has formed under the banner of Reparations for Black Students and is leading this massive movement to stop the racist closures.

The coalition says the proposed school closures are part of a long process of gentrification and systemic racism in Oakland. Two years ago, the Oakland School Board closed Roots International Academy, another primarily Black school in East Oakland, despite overwhelming community opposition. Anger over that closing fuels the current movement for Reparations for Black Students.

Since the OUSD announced plans to permanently close or merge 15 schools, this city’s people have erupted in protests, demonstrations, car caravans, packed school board meetings and even an ongoing hunger strike. Two Black Westlake Middle School education workers are entering the second week of their hunger strike outside the school.

Over 1,800 people packed a virtual zoom meeting of the Oakland School Board Jan. 31 to protest the planned closures. Speakers included a large group of students who all testified how important these neighborhood schools were to them and their families. Members of the Oakland Education Association (OEA), the teachers’ union, and SEIU Local 1021, which represents education workers such as attendance clerks, spoke against the school closures, as did many Oakland parents. 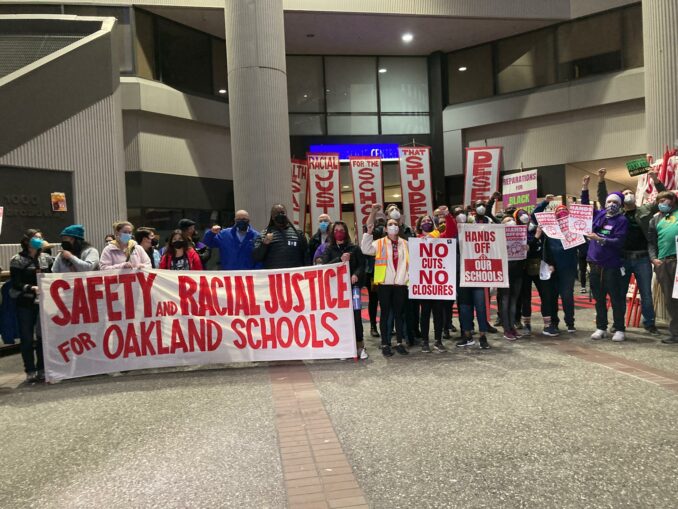 Protesters gather in front of the closed Oakland Unified School District offices to demand justice for the Oakland, California, community.

Several school communities held rallies outside their schools during the virtual board meeting. School Board Director Mike Hutchinson, who has been outspoken in his opposition to the closures, attended the meeting from a spirited rally at Manzanita Elementary School.

Then on Feb. 1 and 3, car caravans organized by Oakland Not for Sale stretched for blocks, as people drove to rally in front of the homes of several Oakland School Board directors’ homes, including those of Board President Gary Yee and School Board Director Sam Davis. Only two school board directors, Hutchinson and VanCedric Williams, are actively opposing the school closures. Students who serve as board directors are also speaking out and opposing the closures.

Also on Feb. 1, students and teachers from several schools, including Westlake, walked out and marched to the OUSD offices in downtown Oakland.

A Feb. 4 rally at Oscar Grant Plaza projected labor, student and community unity. Speaking for SEIU Local 1021, which brought a large delegation of school workers to the rally, OUSD Chapter Vice President Donneva Reid reminded the crowd, “Do you know that when they close schools, we have layoffs. SEIU is the backbone of the school district, and we are being laid-off and pushed out.” Reid added, “We are here today to tell the Board no school closures.”

The rally also showed solidarity for workers in International Longshore and Warehouse Union Local 6, who have been doing recycling jobs without a contract for two years. Those workers filled the stage to express their solidarity with the Reparations campaign against school closures. 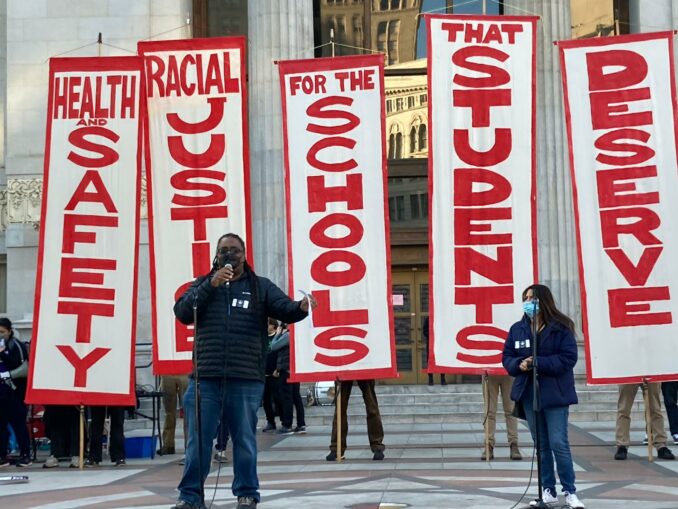 “We have your back” and “Hands off our schools” made up the strong message from Liz Ortega, Executive Secretary-Treasurer of the Alameda Labor Council, representing 135,000 Alameda County workers. Keith Brown, President of the Labor Council and also OEA, challenged the school board to join the community and take the resolution to close the schools off the board’s agenda. “Listen to us, the Oakland community, the parents of Oakland, the students of Oakland, labor — listen to us!” demanded President Brown.

The Feb. 4 event ended with a short march to the OUSD offices, which have been closed since the beginning of the COVID-19 pandemic. OUSD continues to pay an exorbitant monthly rent on this building, while claiming it does not have the funding to keep community schools open.

On Saturday, Feb. 5, a community rally and walk for peace was held at Prescott Elementary School, another historically Black school slated for closure. The school closure measure would impact schools with the highest Black enrollment.

The school board will meet Tuesday, Feb. 8, to vote on the school closure measure. If this militant, united week of action is any indication, regardless of the outcome the Oakland community, led by the Reparations for Black Students campaign, will continue to fight for the schools that its students deserve.

BOP Director Black said it best when she stated: “We ain’t asking them a damn thing. This is our city. These are our communities. These are our people, and we make demands!”