No one knocked on the door of the apartment where Amir Locke was sleeping before Minneapolis police used a key at 6:48 a.m. Feb. 2. They murdered the 22-year-old Black man, nine seconds later. 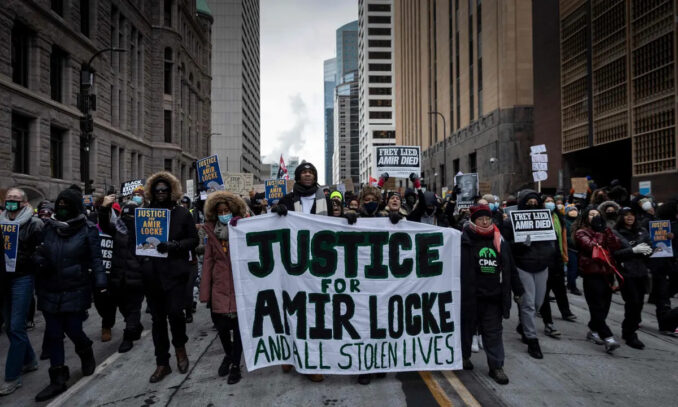 Locke, who police killed while carrying out a search warrant, was wrapped in a blanket and sleeping on a couch. SWAT officers kicked the couch over, waking up Locke who allegedly displayed a gun. Police officer Mark Hanneman immediately shot him.

Repeating the official police line, Minneapolis media labeled Locke a “suspect.” Only later did police admit that Locke was not named in their warrants. Locke had a license for his gun but was given no chance to survive his encounter with police. 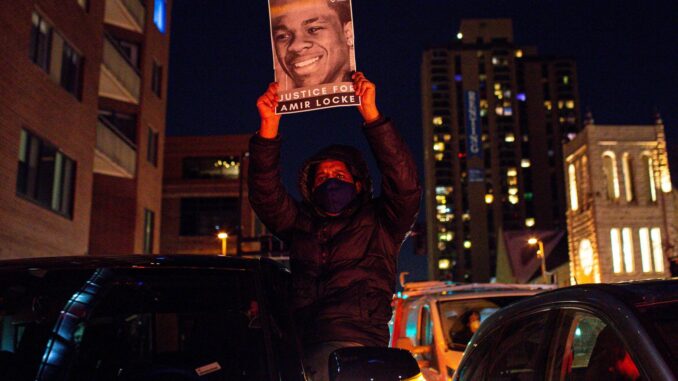 Locke’s murder has generated protests, including a nighttime car caravan through the streets of Minneapolis Feb. 4 and a turnout of thousands of protesters over the weekend. Black Lives Matter activists disrupted and took over the press conference where Mayor Jacob Frey and Interim Police Chief Amelia Huffman tried to justify the shooting.

At 5 a.m. Jan. 10, Las Vegas Metropolitan Police, serving a search warrant for someone else, forcibly entered the apartment of 19-year-old Isaiah Tyree Williams, firing 23 shots and killing the Black youth within seconds. After the Las Vegas Metropolitan Police Department realized Williams was not who the cops were looking for, they immediately began demonizing him, listing charges he would have faced had he used his weapon to protect himself against their armed break-in.

Both shootings are all too reminiscent of the murder of Breonna Taylor, a 26-year-old Black woman, by Louisville, Kentucky, police on March 13, 2020. In all these cases, controversial “no-knock” search warrants, which had identified other people as target suspects, provided cover for white police officers to break into residences of Black individuals, late at night or early in the morning, and execute people of color without trial.

Taylor, an emergency room technician, was asleep when Louisville police used a battering ram to enter her apartment shortly after midnight. After breaking down her door, police fired multiple shots, striking Taylor five times. Louisville police delayed calling an ambulance and let Taylor die. Only after the fact did police acknowledge that Taylor was not the “suspect” listed on their warrant.

Brett Hankinson, one of the officers who shot Taylor, is currently on trial in Kentucky — not for killing Taylor but for three counts of wanton endangerment for firing shots into a neighboring apartment.

The same Minneapolis judge who presided over Chauvin’s trial signed off on the no-knock search warrants that resulted in Locke’s death. The St. Paul, Minnesota, Police Department had requested a knock-and-announce warrant. Yet Minneapolis police, who have the options of knock or no-knock warrants, chose the latter.

In November 2020, Frey declared a moratorium against no-knock warrants, yet the practice continued, averaging around 139 per year. Since Jan. 1 Minneapolis police requested and were granted 13 no-knock search warrants. In cities across the U.S., police are weaponizing no-knock warrants — using them to brutally murder Black and Brown people.

That Frey and Huffman allowed no-knock warrants after promising the moratorium and other reforms following Floyd’s murder exposes just how corrupt the police system is and why reforms and convictions of a few guilty cops are not enough.

Chauvin’s conviction was designed to pacify millions of BLM activists who filled the streets of cities around the world in the months following Floyd’s murder. Politicians like Frey made promises to reform and in some cases even “defund” police departments, only to have these promises evaporate since the November 2020 elections.

In the year after George Floyd’s murder, 1,068 people were killed by police — an average of three per day. This pattern did not stop with Chauvin’s conviction. The capitalist system gives white police carte blanche to shoot to kill Black and Brown people. While receiving considerable media coverage, convictions like Chauvin’s are the exception not the norm.

Showcase trials, even when they result in rare jail terms for killer cops, do nothing to fundamentally change systemic racism and a capitalist state apparatus dependent on brutality and repression. The problem is not a few bad officers — the problem is systemic racism throughout the entire U.S. criminal “justice” system — from the beat cops to racist U.S. Supreme Court judges.

The demand to “abolish the police” is all the more relevant than when it was first raised in 2020.