Feb. 6, 2022, marked the 90th birthday of Cuban revolutionary Camilo Cienfuegos. One of the youngest of the leaders of the Revolution, Cienfuegos was first known to the people of Cuba through his fierce guerilla warfare, becoming a leading commander in Fidel Castro’s forces. Following the Revolution Cienfuegos became a driving force behind agrarian reform in Cuba. 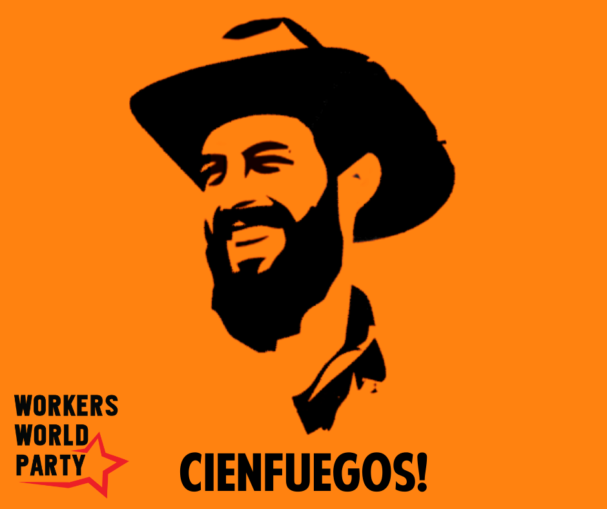 And then less than a year after victory, Cienfuegos, hero of the Battle of Yaguajay, quite literally vanished into thin air. It was the night of Oct. 28, 1959; and Cienfuegos, who was also a pilot, was flying from Camagüey back to Havana. While flying over the Straits of Florida, between the Florida Keys and Cuba, his plane disappeared.

An immediate search was launched, lasting for several weeks, but there was no sign of either Cienfuegos or the plane. It is generally accepted that he experienced some sort of emergency and crashed into the Straits, plunging his body and plane deep into the water. He was only 27 years old when he disappeared.

It is critical to study revolutionaries like Camilo Cienfuegos, who, dying at a young age, may not receive as much attention as longer-lived comrades. But they too are veterans — and sometimes martyrs — of the monumental revolutions that bring about a better world. As Fidel Castro influenced Cienfuegos; Cienfuegos influenced Castro. This brief look at Camilo Cienfuegos seeks to further reveal his significance.

‘Cuba had to be free’

Camilo Cienfuegos Gorriarán was born in Havana in 1932; and from a young age, he was influenced by the personal as well as the political. His father, a working-class tailor, held left-wing political views, which he taught to Cienfuegos. As he got older, Cienfuegos harnessed an artistic ability that gained him entrance into a fine arts school in Cuba, but he was forced to leave due to the financial pressures facing him and his family. Shortly after he followed his father’s path and became a tailor.

All the while Cienfuegos was slowly immersing himself in different struggles in Havana. His earliest political work was taking part in mass protests in the city against the rise of bus fares. This was in 1948; Cienfuegos was only 16 years old.

Five years later he and a friend, Rafael Sierra, traveled to the U.S. on a 29-day visa in search of work. When the visa expired, Cienfuegos remained in the U.S., underground, living in Chicago, San Francisco and New York City, over a span of several months. While in New York, he joined a group of left-wing Cuban political exiles, Cuban Civic Action, who published a newspaper, “La Voz de Cuba” (“The Voice of Cuba”). Cienfuegos participated in anti-imperialist study groups that discussed political theorists such as Cuban José Martí.

Cuban Civic Action was in solidarity with the early actions of Fidel Castro and the Cuban guerillas, including their 1953 attack on the Moncada Barracks, which is generally accepted as the beginning of the Cuban Revolution. The group regularly participated in demonstrations against Fulgencio Batista, Anastasio Somoza, Rafael Trujillo and other U.S.-backed, right-wing dictators in Spanish-speaking Caribbean and Central American countries.

While in New York Cienfuegos participated in a picket against Dominican dictator Trujillo, who was then staying in a hotel in the city. Violence erupted at the demonstration, and a crackdown on Latinx immigrants followed. Cienfuegos and Sierra fled briefly to Chicago and then moved on to San Francisco to find work. There Cienfuegos was arrested by immigration officials, after risking his safety to help another undocumented friend being detained. He and Sierra were both deported to Mexico and then returned to Cuba.

There Cienfuegos became active in the uprisings and protests against Cuban dictator Batista, including a demonstration in memory of Antonio Maceo, General of the Cuban Army of Independence of 1898. Cienfuegos was shot by soldiers of Batista at the protest and taken to a student hospital sympathetic to the Revolution.

Cienfuegos later recounted: “There I experienced one of the greatest emotions of my life, when more than a hundred people gathered in the entrance broke into cheers and applause when they carried me up. I felt such an emotion; I felt about to cry, and I yelled out, ‘Viva Cuba!’ I was most sure then that, whatever the cost, Cuba had to be free.” (todayinlatinamerica.com)

After recovering from his wound, Cienfuegos resolved to join the July 26th Movement. Named after the date of the Moncada Barracks attack, the Movimiento 26 de Julio was the Cuban vanguard revolutionary organization (and later political party) led by Fidel Castro.

At that time the Movement was exiled to Mexico. Cienfuegos had to travel there through the U.S., going from Miami to San Francisco undetected. He remained in San Francisco for three months, working and collecting money; and then in May 1956, he traveled to Mexico to officially join Fidel Castro and the revolutionary struggle.

Cienfuegos was one of the 82 guerilla fighters who traveled aboard the ship, the Granma, to return to Cuba in November 1956, when the battle for the Revolution reignited. He was one of 12 survivors of attacks on the July 26th Movement at Alegría de Pío by Batista forces in 1957. He and other surviving guerilla fighters wandered in the Sierra Maestra Mountains for 30 days, before finding Castro and rejoining the revolutionary forces.

In December 1958 Cienfuegos, now a comandante, led a combined force of fighters alongside Che Guevara in the Battle of Yaguajay. In a decisive victory for Cuban revolutionaries over the soldiers of the Batista government, they forced that garrison to surrender on Dec. 30, 1958. A day later, Cienfuegos and Guevara, along with allied non-Castro forces, captured nearby Santa Clara. These actions were significant in causing Batista to flee Cuba on Dec. 31, leaving the communists and the Revolution victorious.

Cienfuegos became Chief of Staff of the Cuban Army, a close advisor to Fidel Castro and a close friend as well. Even after the Revolution, in the brief months leading up to Cienfuegos’ disappearance, Castro sought advice and criticism from him.

One of the earliest slogans of the Cuban Revolution was “Vas Bien, Fidel!” or “You’re doing fine, Fidel!” This saying began with Cienfuegos. At a rally a week after victory, on Jan. 8, 1959, Castro interrupted his own speech, turned to Cienfuegos and said “Voy bien, Camilo?” or “Am I doing all right, Camilo?” To which Cienfuegos replied, “Vas bien, Fidel!” (Georgie Anne Geyer, “The Untold Story of Fidel Castro,” p. 201)

Cienfuegos took up the struggle of agrarian reform in Cuba, which was a massive undertaking, as it involved completely restructuring productive forces in Cuba, previously colonized by capitalism, into a nationalized system that could meet the needs of the people. In his last public speech before his disappearance, Camilo declared, “Even if it brings the sky down on our heads, agrarian reform is on!” showing his full agreement with the Revolution. (historyofcuba.com)

Every year since Cienfuegos’ disappearance, a celebration is held Oct. 28 in his memory. On that day the children of Cuba toss flowers into the sea as they say: “A flower for Camilo.” On the island, Cienfuegos is honored with many murals, art installations and schools named for him. He is not forgotten in Cuba.

When revolutionaries like Lenin and Mao are discussed, it is often stressed (as it should be) that they fought for decades for their respective revolutions, and that is true. Lenin was 47 years old when the Bolshevik Revolution took place, and Mao was 56 years old at the time of the Chinese Revolution.

Other revolutionaries lived long lives of righteous struggle but died before their nations smashed the imperialist chains of oppression. Such was Ho Chi Minh, who lived to be 79 but died six years before the defeat of the U.S. by the People’s Army of Vietnam at the decisive Liberation of Saigon in 1975.

Camilo Cienfuegos was only 26 years old when he helped lead a triumphant socialist revolution just 90 miles off the coast of the U.S., center of imperialism.

To say that is an incredible feat is an understatement. Yet Camilo Cienfuegos accomplished that; and despite being lost physically, his actions, words and legacy still live on in the Cuban masses.