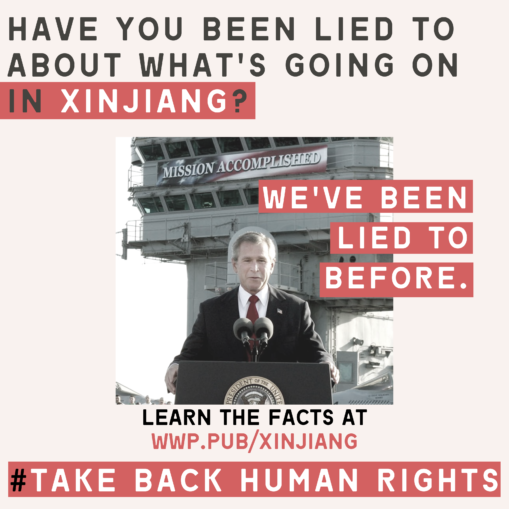 Feb. 6 update — The U.S. war propaganda machine is working overtime during the Olympics to defame China with false accusations of “human rights abuse” against the Turkic-speaking Muslim Uyghurs, based in its Xinjiang Province. As readers evaluate these claims, keep in mind these facts: 1) There is a centuries-long history of racist U.S. crimes — through state force and economic exploitation — against Indigenous, Black, Latinx and Asian and other oppressed peoples, on land now occupied by the U.S. These crimes, which continue to this day, are integral to U.S. tactics of military conquest and economic domination worldwide. 2) U.S. imperialist administrations blatantly lie and raise “false flags” against countries they wish to oppose or capture either militarily or economically, not that long ago with the infamous “weapons of mass destructions” fabricated to justify devastating Iraq, a majority-Muslim country. 3) The U.S. state has used the 911 attack to demonize, arrest and incarcerate Muslim peoples at home and to justify destabilizing, attacking and laying waste to many Muslim-majority countries besides Iraq, including Afghanistan, Sudan, Somalia, Syria, Libya and Yemen, while threatening and sanctioning Iran. 4) U.S. claims related to the Uyghur minority have not been endorsed or supported by the U.N. or any Muslim-majority country.

Worker World urges its readers to carefully study the following fact sheet and use its information to debunk the anti-China propaganda flooding the U.S. during the Olympics. The statement was originally issued by the International Action Center (iacenter.org), posted at wp.me/p4Yme1-4Rf, available in PDF at wp.me/P4Yme1-4SF and published by Workers World, December 20, 2021.

Claiming that it is acting in defense of human rights, the U.S. tries to cover its own criminal record on internal human rights violations and its record of endless wars, assassinations, coups and devastating sanctions by making charges and targeting other countries.

The “2021 Annual Threat Assessment of the U.S. Intelligence Community,” issued April 9 by Avril Haines, Director of National Intelligence, labeled China as “the greatest threat to the United States.” Numerous other reports and official statements claim Washington must prepare an intensifying level of U.S. intelligence operations, cyberattacks and investment in military technology to counter China.

The U.S. military has encircled China. With joint Democratic and Republican Party backing, the U.S. has imposed economic sanctions, an onerous trade war and canceled cultural exchanges and visas for tens of thousands of Chinese students. This campaign is cynically justified as a defense of human rights.

The most extreme U.S. claims and smear campaigns are focused on charges that China is violating the rights of the minority Uyghur people in the Xinjiang [pronounced Shinjaang] Uyghur Autonomous Region of China.

Propaganda serves to deflect our attention from what we already know. Over 2.2 million people are incarcerated in the U.S., which has the largest prison population in the world. Racist police kill over 1,000 people a year. Why not address the glaring human rights crimes in the U.S.?

Xinjiang Province, in the far western region of China, is an arid, mountainous and still developing region. Xinjiang has significant oil and mineral reserves and is China’s largest natural gas-producing region.

Urumqi, the capital, is a modern rail-and-transit hub. For hundreds of years it was the gateway to Central and West Asia and now to European markets. The province is home to diverse ethnic groups, including Turkic-speaking Muslim Uyghurs, Tajiks, Tibetans and Hui peoples, as well as Han people, who comprise the large majority of the Chinese population.

Xinjiang is a major logistics center for China’s ambitious Belt and Road Initiative. This broad infrastructure development program is a multitrillion-dollar initiative that has expanded to include programs in 138 countries.

Unable or unwilling to compete by helping countries develop in Central and Western Asia and Africa, the U.S. has done everything possible to sabotage the Belt and Road programs. Washington has imposed economic sanctions on China, surrounded the country with missiles and military bases, funded mercenary armies and promoted internal dissention. This is highly profitable for the U.S. military industrial complex.

Xinjiang borders five Central Asian countries, including Afghanistan and Pakistan, where more than 1 million U.S. troops — and an even greater number of mercenaries, contractors and secret agents — have operated for over four decades in an endless series of destructive U.S. wars.

The U.S. and its corporate media charge that the Chinese government has rounded up 1 million people, mainly Muslim Uyghurs, into internment camps. Many note the cynical duplicity of Washington posing as a friend of Muslims.

In the last 30 years, the U.S. has waged wars primarily against Muslim countries — Iraq, Afghanistan, Libya and Syria, and has engineered proxy wars which have killed 4 million people and turned 40 million people into refugees. Washington has imposed harsh economic sanctions on 15 Muslim countries, creating hyperinflation and hunger. This war policy reverberates into anti-Muslim campaigns within the U.S.

Like the “weapons of mass destruction” pretext for the war on Iraq, Washington is justifying its aggressive policy against China with false claims that China is committing “genocide” against the Uyghur minority. The U.S. media claims this is based on a United Nations report. However, the U.N. Office of the High Commissioner for Human Rights has confirmed that no U.N. body or official has made any charges against China similar to what Washington charges is “genocide.”

Tales of forced birth control and sterilization against the Uyghur minority are exposed by census data. The Uyghur population has actually grown from 3.61 million in 1953 to 11.62 million in 2020. Like the other minority (non-Han) peoples, the Uyghurs were exempt from China’s one-child policy.

More than 60 countries in Asia, Africa and Latin America support China against these false U.S.-initiated claims, including more than a dozen members of the Organization of Islamic States.

Supporting the U.S. charges are non-Muslim countries in Europe, plus Canada, Japan, Australia and New Zealand. These countries are the historic colonizers, which supported decades of U.S. wars in the Muslim world.

The $250 billion U.S. Innovation and Competition Act (USICA) passed the Senate in June 2021 and is about to be voted on by the House of Representatives as November ends. USICA integrates the previously proposed Endless Frontier Act, the Strategic Competition Act of 2021 and the Meeting the China Challenge Act and others.

USICA’s more than 2,000 pages lay out plans to invest tens of billions of taxpayer dollars to give the U.S. technological edge over China in semiconductor manufacturing, require “buy American” requirements for federally funded infrastructure projects and slowdown or sabotage China’s technological development.

Measures against China include allocations of $300 million a year for four years ($1.2 billion), in what is called the ‘‘Countering Chinese Influence Fund.” It provides funding for charging China with “forced labor” in its Xinjiang Uyghur Autonomous Region, suppressing human rights, “unfair competition” and “intellectual theft.”

Who makes the charges on ‘human rights’?

Sensationalized claims that China is guilty of rights violations in Xinjiang come from the Washington-based and funded Network of Chinese Human Rights Defenders and the World Uyghur Congress. These groups receive most of their funds from the CIA-linked National Endowment for Democracy (NED), a major source of funding for U.S. “regime change” operations around the world.

Other sources of unsubstantiated reports by the International Uyghur Human Rights and Democracy Foundation and the Uyghur American Association, are also funded by NED. Their information sources include Radio Free Asia, a news agency the U.S. government has funded for decades.

The Network of Chinese Human Rights Defenders shares the same Washington address as Human Rights Watch. The network has long called for sanctions against China. HRW has been a major source of attacks on governments targeted by the U.S., such as Venezuela, Nicaragua, Cuba, Syria and China.

Can these U.S.-funded organizations be trusted?

Just as in past U.S. military offensives, the corporate media is willing to use flimsy anti-China propaganda without checking basic facts.

A detailed investigative report written by Ben Norton and Ajit Singh, entitled: “No, the U.N. did not report China has ‘massive internment camps’ for Uighur

The NED pays handsomely for unsourced documents making claims against China. But these claims provide nothing like the documentary proof of U.S. war crimes made public by Chelsea Manning, Julian Assange, Daniel Hale and John Kiriakou. They were imprisoned for providing concrete evidence of U.S. war crimes. (Kiriakou spent two years in prison, Manning seven; both have been released.)

Harsh new sanctions on Chinese cotton, a major export from the Xinjiang region, were fueled by lurid descriptions of handpicking, using slave labor and child labor in the cotton fields. However, cotton farming is more than 90% mechanized in Xinjiang.

U.S. corporate media give little recognition to China’s historic achievements of ending extreme poverty, illiteracy and lack of potable water, while providing access to basic health care for 800 million of its 1.4 billion people.

Haines’ 2021 Intelligence Report, referred to earlier, even condemns China for “using its success in combating the coronavirus pandemic to promote the ‘superiority’ of its system”!

For four decades, the CIA and secret Pakistan Intelligence Services (ISI) in Afghanistan sought to recruit and train Uyghurs as mercenaries, planning to use them as a future terror force in China. They recruited Chechnyans from Russia’s Caucasus region for the same reason. Both groups were funneled into Syria in the U.S. regime-change operation there.

China’s government responded after terror attacks and explosives in the country had killed hundreds of civilians in busy shopping areas and crowded train and bus stations since the 1990s. Rather than copy Washington’s “war on terror” tactics, China has dealt with the problem of groups that are weaponized with religious extremism by setting up large-scale vocational education and training centers.

Rather than worsening underdevelopment through bombing campaigns, military occupation, secret rendition kidnappings, sanctions and drone strikes — tactics employed by the U.S., China is seeking to engage the Xinjiang population through education, skills development and rapid economic and infrastructure development.

There have been no terrorist attacks in Xinjiang since the reeducation campaigns began in 2017.

A big part of opposing the next U.S. onslaught is challenging the corporate media’s war propaganda and providing facts to counter the defamation campaigns against China.

We need health care for all, free education, union jobs and a clean environment, not continuous U.S. war propaganda and militarism.