This article was based on a leaflet issued by the New York City organizing coalition of Puerto Rican and anti-imperialist groups sponsoring the Jan. 28 rally. 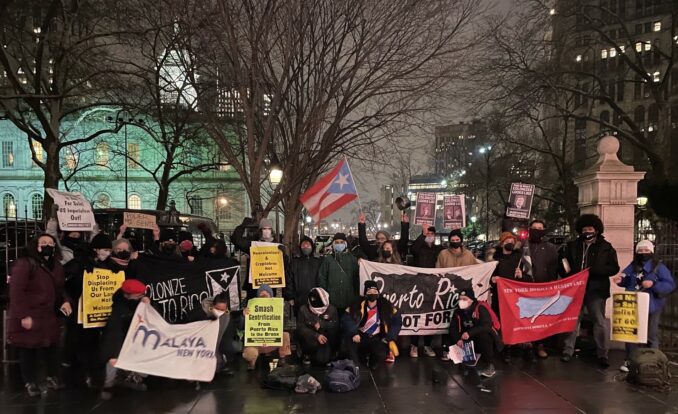 Act 60 tax incentives have existed in Puerto Rico since 2012, being formerly known as Act 20/22. But the rise of crypto currency — as well as the ongoing debt crisis on the island — has made Puerto Rico extremely attractive to wealthy foreign investors. These are eager to reap the benefits of the Act 60 tax exemptions and turn Puerto Rico into a crypto hub.

Act 60 provides millions of dollars in tax exemptions to certain investors and businesses. These tax exemptions are not available to longtime residents on the island.

Economists have indicated that the incentives fail to provide meaningful economic growth in Puerto Rico. Instead, measures such as Act 60 rapidly accelerate gentrification and displacement of locals on the island.

A key figure in crypto currency manipulation in Puerto Rico is billionaire Pierce, who has gone on a buying spree of Puerto Rican land. He has purchased a 150-room ocean-front hotel on the island of Vieques and bought up historical buildings in Old San Juan.

Mayor Adams is particularly close to Pierce, despite the latter’s reputation as a crypto colonizer on the island. Adams flew to the Democratic Party-sponsored SOMOS conference on Pierce’s private jet. A political action committee supporting Adams’ mayoral bid received a $100,000 donation from Pierce.

Adams himself converted his most recent paycheck to crypto currency and says he plans to turn New York City into a “bitcoin hub.”

New York Boricua Resistance spokesperson Gabriela Malespin noted: “Crypto billionaires like Brock Pierce are intent on buying up Puerto Rican lands and displacing Puerto Ricans from the archipelago at an alarming rate. Despite working-class Puerto Ricans making their feelings known about these Act 60 colonizers multiple times, they refuse to leave and are intent on turning the island into a ‘Puerto Rico without Puerto Ricans.’

Colectiva Solidaridad spokesperson Cyn Rodriguez highlighted how Puerto Ricans, both in the diaspora and on the archipelago, are ready and mobilized against the tide of Act 60 beneficiaries: “While the Puerto Rican government is intent on selling the island to the highest bidder, we recognize that the stakes are too high. We’re going to lose Puerto Rico if we don’t repeal these Act 60 tax benefits.

“It is time for Puerto Rican anti-imperialist organizations (both on the island and in the diaspora) to mount an aggressive campaign to repeal the tax benefits, return lands to the Puerto Rican people and fight for the independence of Puerto Rico!”