This is an edited talk given to a Workers World Party plenum Jan. 28 byArjae Red, a worker organizer with Starbucks Workers United in Buffalo, New York.

Update Jan. 31: According to SB Workers United and More Perfect Union on twitter, 60 stores across 19 states have filed for a union election. In Buffalo, where the Starbucks surge started with a union-yes vote Dec. 28, contract bargaining began for the Elmwood and Genesee stores, with ballots going out to three additional stores in the area. 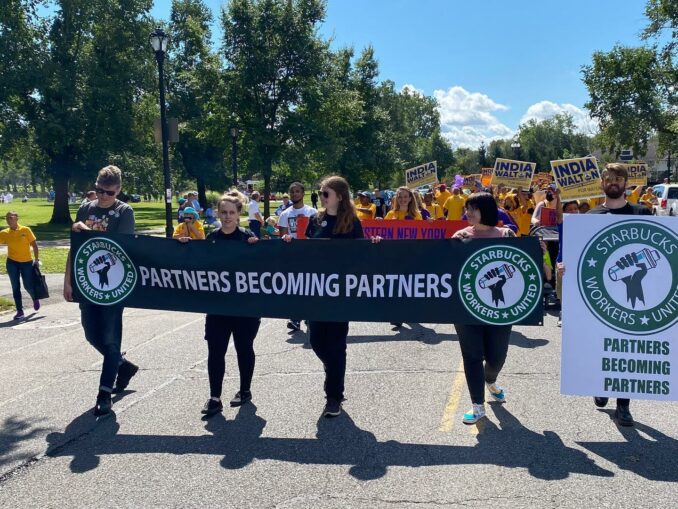 December 9 marked a milestone for workers in the U.S. and a revival of the labor movement, led by workers at Starbucks here in Buffalo. This day the Starbucks store on Elmwood Avenue became the first unionized corporate-owned Starbucks in the U.S. This was followed by another victory at the Cheektowaga location in Buffalo, the store that I work

As recently as Jan. 28, I heard about two stores in Philadelphia that filed. At one point, within a one-week period, five stores filed in succession.

The conditions the workers face today, made a hundredfold worse by the COVID-19 pandemic, have created a situation where workers across industries are fed up and looking to organize. What workers at Starbucks and Amazon, who are fighting for a union, have done is tap into this energy and show people that they don’t have to put up with it anymore.

There is something worth noting about the Starbucks union drive that sets it apart from some other union struggles. It’s the fact that unlike at Amazon, which is very well-known for its abhorrent conditions and dehumanizing atmosphere, many of the Starbucks workers pushing for a union actually like coming to work. This isn’t to say that Starbucks workers aren’t exploited and dehumanized by the company, they absolutely are.

Many critics of the union will say: “Starbucks treats its workers well, offers good benefits; why would they want a union?” This is a gross overstatement and gives Starbucks far too much credit. In fact, there are many ways in which Starbucks stoops to the level of Amazon. But when union supporters at Starbucks are asked why they want a union, it’s not necessarily because they think Starbucks is the worst possible company to work for.

While there are plenty of legitimate grievances with Starbucks that workers have, many of which are common across the board — from a lack of adequate COVID-19 safety protocols, to understaffing, to inconsistent scheduling — these problems alone have not been the primary motivation for workers to form a union.

What is motivating many Starbucks workers to unionize is a fundamental belief that they should have a say in their workplace and the idea that a company doesn’t have to be as bad as Amazon or Walmart for the workers to deserve a union. Many stores that have filed for union representation have explicitly stated this in their letters to Starbucks CEO Kevin Johnson — that the decision to unionize is based on principle and not a specific list of hardships and grievances.

This to me, is evidence of a shifting in the collective class consciousness of many workers. This is a major development for the working class, something that is vitally important for building a militant movement towards socialism. What we are seeing here is the working class beginning to become aware of itself as a class with common interests and common oppressors.

As I wrote in my January 4 article in Workers World:

“From a socialist perspective, this development in the consciousness of the working class cannot be overstated. We are seeing workers become more collectively aware of our world-historic role as agents of change in society, the only force that can bring about a revolutionary break from capitalist exploitation.

“Workers across the board are no longer content with acting as passive observers to their own exploitation. If this kind of awareness can continue to reach outside of these pockets of struggle and into other workplaces, apartment buildings and the broader community, a classwide perspective will be reached that can arm working-class and oppressed people with the ideological tools needed to achieve liberation, beyond mere pay raises and contractual benefits.” (workers.org/2022/01/60928/)

It is our job as revolutionaries to make sure the working class realizes the world historic role we collectively play. As union drives spread across the country and across different companies, we will see workers eager to organize in places where it might not have been possible a year or two ago.

Our job is not only to ensure the organizing efforts spread but to provide political training to the young organizers at the head of this movement.