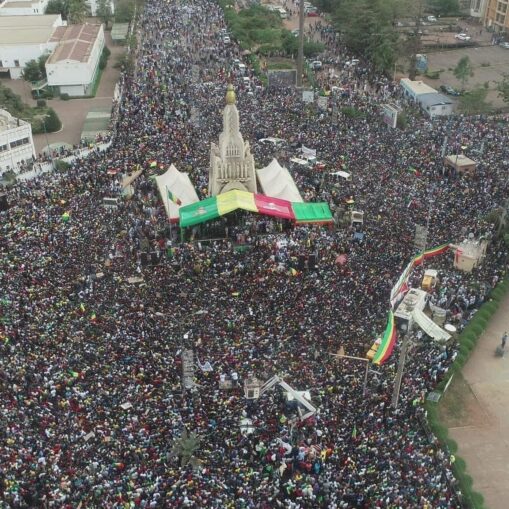 An historic mobilization of the Malian people by the hundreds of thousands in support of the transitional government in Mali and against the severe economic sanctions and implied military threats imposed by the Economic Community of West African States (ECOWAS) created an outpouring of Pan-African solidarity throughout the continent on Jan. 14.

Mass rallies and marches occurred throughout Mali. The largest, in the capital Bamako, with a population of over 3 million, was livestreamed. Live time comments indicate it was watched throughout Africa. Other demonstrations took place in Timbuktu, Kadiolo and Bougouni.

The sanctions were announced Jan. 9 in Accra, Ghana, and include the closure of land and air borders, suspension of financial transactions and the freezing of Malian state assets in ECOWAS central and commercial banks. The sanctions were quickly backed by the U.S., France and the European Union (EU). China and Russia in turn blocked imperialist attempts to have the United Nations Security Council endorse the sanctions.

ECOWAS wants elections to be held by February 2022, while the transitional government says it needs more time to stabilize the country.

Mali is a landlocked, former French colony, whose largest export is gold. The most populated region of the country lies in the Sahel region of Africa on the southern border of the Sahara desert.

The 2011 U.S./NATO war on Libya resulted in the transfer of vast amounts of military weapons into the region from Libyan government stockpiles. In a complicated situation, previous Malian governments then lost control of the region to various armed groups — some with legitimate grievances and some with unknown agendas. Assistance from other countries was requested.

More than 10 years later, Mali is still occupied by thousands of foreign troops. The EU has hundreds of troops under the Swedish-led Takuba Task Force. France has thousands of troops in its Operation Barkhane. There is also the United Nations Multidimensional Integrated Stabilization Mission in Mali (MINUSMA) with around 16,000 military, police and civilian personnel. Still there is no peace and security for the Malian people in the Sahel.

On May 24, 2021, a new government came to power in Mali through nontraditional means — a military coup d’etat. Led by the extremely popular Colonel Assimi Goita, who is currently the President of Mali and the Chairman of the National Committee for the Salvation of the People of Mali, it has been attempting to rally the country to take control of its own destiny. It appears to be making progress — perhaps too much for the imperialists and those who follow their lead.

The Malian people want France and the EU out of the country. The Malian Armed Forces, while small, are preparing to take control of the situation in the Sahel. When Russian military trainers were brought in to replace French advisors, alarm bells went off in the imperialist camp. Sanctions soon followed, fronted by ECOWAS.

The day after sanctions were announced, neighboring Guinea in an act of solidarity stated that it would refuse to apply the ECOWAS sanctions. Speaking on behalf of the Guinean government, Lt. Colonel Aminata Diallo stated, “Our air, land and sea frontiers stay open conforming to our Pan-African vision.” (youtu.be/ztYixk_N46E)

Watching the Jan. 14 livestream from Bamako was incredibly inspiring. Well-known Malian political activist Adama Ben Diarra, wearing his trademark cap with a Cuban flag and the image of Che Guevara, began his keynote speech leading chants by tens of thousands at Independence Square: “Down with imperialism!” “Down with France!” Down with colonialism!” and “Down with racism!”

And Interim Prime Minister Choguel Kokalla Maiga addressed the crowd speaking for the government and observed, “All of Africa is watching Mali today. To some extent, the fate of Africa is being played out in Mali today.” (AFP Jan.15, 2022)