The Postal Board of Governors gathered in Washington, D.C., Jan. 12, in a hastily called meeting to announce the election of their new chairperson, Roman Martinez IV. Also gathered there, but outside the United States Postal Service Headquarters on L’Enfant Plaza, were postal workers, “protect the vote” activists and Ben Franklin himself, representing millions of postal customers and workers who want the BOG to fire Postmaster Louis DeJoy. 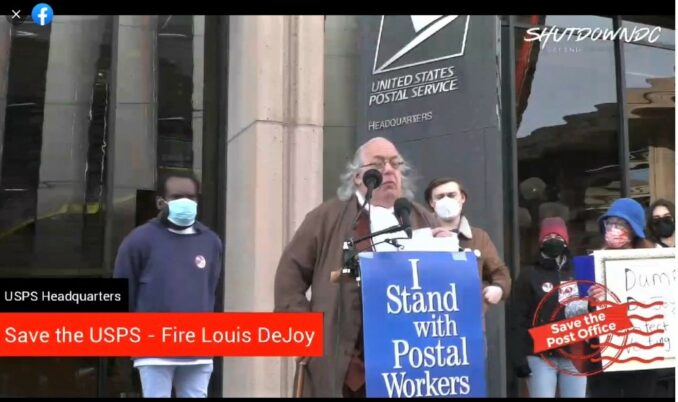 “Ben Franklin,” played by Barry Stevens, calls on the Board of Governors to remove Postmaster DeJoy at a rally outside their Jan. 12 meeting in Washington, D.C.

Debby Szeredy, national Executive Vice-President of the American Postal Workers Union, explained to the crowd she was there to oppose the “surprise meeting” convened to choose a Trump-appointed BOG member as chairperson. She pointed out it was taking place before President Joe Biden’s two new appointees, former head of the General Services Administration Dan Tangherlini and Derek Kan, former deputy director of the Office of Management and Budget, were approved by the Senate. (Video of the rally: youtu.be/mXf8s4n4N7g )

By law, DeJoy can only be removed by majority vote of the Board of Governors, most of whom were appointed by the Trump Administration. President Biden replaced two BOG members in 2021.

Even though Biden’s two additional Governors (one Democrat and one Republican) will not change the balance on the nine-member board, the current board members took no chances and placed their pro-DeJoy member in a leadership position for the next year without their vote.

Retired New York City postal worker Dennis O’Neil, who chaired the rally, said in the USPS “leadership has been catastrophic during the pandemic.” Nevertheless, DeJoy, appointed by Trump in May 2020, has been able to withstand heavy criticism for his mishandling of the mail delivery crisis during the pandemic in 2020. Since then, O’Neil said DeJoy has made things even worse with “step one of his 10-year plan — changing the delivery standards.”

O’Neil said, “When they brag about their leadership and their on-time deliveries, which is a lie, we need to hold them accountable.”

In 1989, 56% of first-class mail was delivered overnight, 85% within two days. After DeJoy’s recent changes, only 7% of letters are delivered overnight, 28% within two days. As Amazon, UPS and other delivery services decreased delivery times through high tech and building more local distribution centers, the leadership of the Postal Service computerized mail processing; but by simultaneously closing down processing plants through consolidation, they’ve slowed down actual delivery times. (tinyurl.com/2s48554y)

Ben Franklin was appointed Postmaster General in 1775. If the Postal Service is to continue delivering mail in the 21st century, it will require many more postal workers joining the fight to keep it. Together with postal service supporters, we can put a halt to privatization and keep the USPS a public service instead of a profit-making corporation that will just make the billionaire class richer.

Joe Piette began as a postal clerk, became a letter carrier and retired in 2011 after 30 years in the USPS.